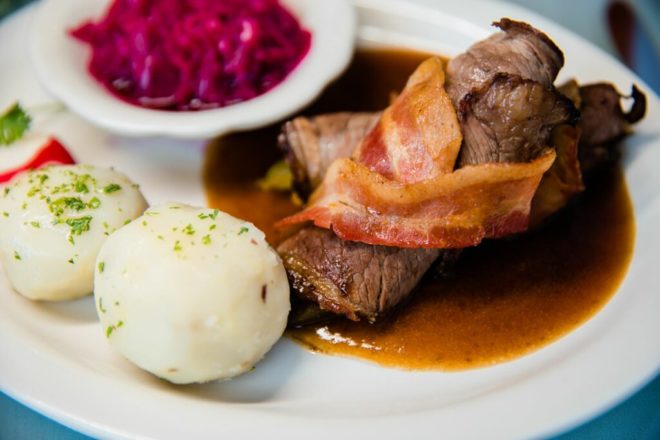 When Cory Lehman took ownership of The Mill Supper Club at the junction of Highways 42 and 57 on the north end of Sturgeon Bay, he took over a well-established restaurant: The previous owners had been at the helm for 55 years. Having worked there as a teenager, he knew there were aspects of the classic supper club that he would keep the same, but he also wanted to incorporate some other cuisines to enhance the menu.

“At that time, there were not a lot of German menu offerings in the area, and with the stone façade on the outside of the building and all the dark wood in the bar, I felt the German cuisine was a good addition,” Lehman said.

The German fare shows up as entrées – Wiener schnitzel and chicken jägerschnitzel, and weekly specials such as the beef rouladen – and as appetizers such as the Reuben bites, a giant Bavarian soft pretzel and a currywurst poutine (a German twist on the classic poutine).

Of course, you can’t serve German fare without German beer, and The Mill has plenty of that, too, including Weihenstephaner Dunkel, Erdinger Weissbräu, Bitburger Pilsner, Hofbräu, Hacker-Pschorr, Spaten Optimator and Leinenkugel’s Oktoberfest.

“We also have what I believe is the only mug club in the area,” Lehman said. “Members have their very own stein hanging behind the bar to use each time they visit and are able to take advantage of many member perks and discounts.”

Because of COVID-19, there will be no Oktoberfest events this year, but Lehman plans to host celebrations in 2021. Find out how to join the mug club and learn more about the The Mill Supper Club at themillsupperclub.com.