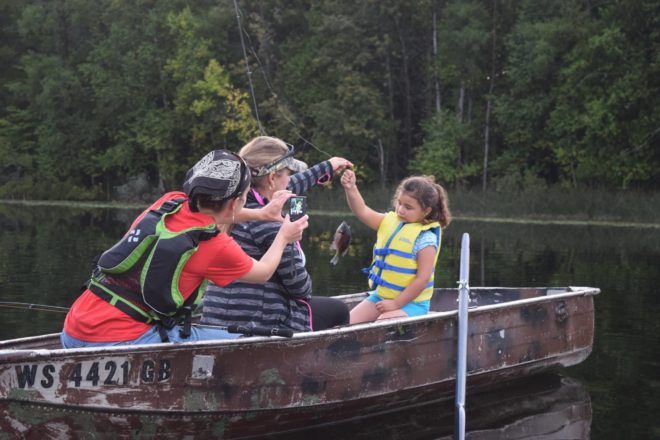 Although the number of anglers nationwide has decreased in the past decade, the percentage of women buying licenses has increased. Using the camera on her smartphone, Liz Melotte of Algoma (left) captured a memory of daughter Ainsley’s catch: a bluegill reeled in on a Kewaunee County inland lake. Photo by Kevin Naze.

Fog rose like wisps of smoke off the flat-calm water, and songbirds greeted the new day with some of nature’s finest music. The old rowboat creaked and groaned with each calculated stroke of the oars, and I hand-scooped warm lake water and dripped it onto the oar sleeve in an effort to quiet the approach to my first spot. Alone on a small, inland lake surrounded by a towering, old forest – and with enough bait, snacks and refreshments to last for hours – I was in heaven on earth.

It’s true that the Kewaunee/Door County Peninsula offers world-class fishing opportunities for sexier species such as salmon, trout, smallmouth bass, muskie and walleye. And although it’s hard to beat the savage strike of a Lake Michigan chinook or the incredible aerial display of a trophy rainbow, there’s something powerfully and mysteriously attractive about getting back to your childhood angling roots.

For many of us, panfish such as bluegills, pumpkinseeds and perch were what got us hooked on fishing, and watching a bobber dip below the surface beat anything you could see on a screen.

A half-century later, the allure of small lakes and what fins beneath the surface still fascinate me. Today, though, my focus has switched from filling a stringer or basket to teaching beginners – both kids and adults alike – about the thrills of fishing and boating and the connection to our wilder side.

Get back in the game

One of the most popular outdoor recreational activities in the nation isn’t immune to the one-two punch of demographics and digital devices. For a variety of reasons, many anglers who once fished as children, adolescents or young adults no longer buy licenses.

The latest numbers show fishing had about 30 million paid participants last year. Including those who don’t need a license (most states allow youth to fish for free; in Wisconsin, that’s kids ages 15 and younger), the number climbs to an estimated 45 million to 50 million anglers. Wisconsin has nearly 1.3 million license-buying anglers, with an economic impact reported at $2.3 billion. Our state is the third-ranked nonresident fishing destination.

The U.S. Fish and Wildlife Service publishes a national survey of fishing, hunting and wildlife-associated recreation every five years. The 2016 report showed an 8 percent increase in fishing participants, with the Great Lakes region showing the largest increase at 10 percent. That’s the good news.

The bad news is that America has lost anglers during the last 20 years – likely a combination of an aging population, urbanization and competition from digital distractions. In recent years, though, women have helped to reverse the trend. Although only about one of every four anglers in the U.S. is female, the percentage of women buying fishing licenses has increased during each of the last three survey periods.

Catching fish tops the list of why most men fish, but a recent national survey found that the number-one reason women fish is to “relax and unwind.” Number two was spending time outdoors; number three was spending time with family and friends; and number four was “catching fish.”

Regardless of your gender, Wisconsin has a great deal if you’ve never purchased a license or haven’t done so in at least a decade. For $5 (for residents) or $25.75 (for nonresidents), you can buy what’s known as a first-time buyer’s license, which is good for one fishing season, April 1-March 31.

Another low-cost option is the one-day, “try before you buy” license, which, for $8 (for residents) or $10 (for nonresidents), allows a one-day experience with fishing that can be applied toward the cost of an annual license if you want to continue. That one does not include salmon and trout stamp privileges.

If you’re fishing Lake Michigan or Green Bay for just a day or two, a two-day license is your best bet. For $14, it includes the salmon and trout stamp privilege.

Wisconsin has dozens of other licensing options. You can find them all anywhere licenses are sold or online at dnr.wi.gov, or you can download and buy them right from the DNR’s GoWild app.

License dollars are crucial to state agencies for fish stocking, fisheries research, public access and other fishing and boating efforts. The DNR also receives millions of federal dollars each year as a kickback from excise taxes collected on fishing equipment and motorboat fuel, based mainly on license sales.

That means that every time you purchase a fishing license or register or fuel up a boat, you’re helping to fund the conservation and preservation of the natural places you love. Summer is a great time to get back in the game! Learn more at takemefishing.org.

Youth ages 15 and younger will get a hot dog, soda, chips and door prizes for a $2 fee, and trophies will be awarded to the lucky anglers who reel in the largest fish in each category.  To learn more, call Gary or Cheryl Nault at 920.743.1100.