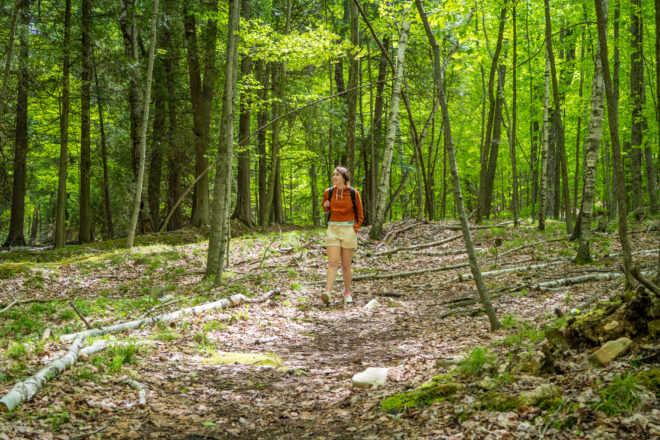 Saturday is recognized as National Trails Day. Celebrate by enjoying some time on the trails, of which Door County offers many. Photo by Rachel Lukas.

Coming home with muddy boots isn’t usually a good thing, but even the cold rain couldn’t dim the rejuvenation I experienced recently while out on the trails.

Door County has trails in every corner: in state and county parks, nature sanctuaries, Door County Land Trust properties and state trails such as the Ice Age and Ahnapee trails. Added up, as best as I can figure, the peninsula is home to more than 170 miles of trails.

Helped along by this sheer volume, hiking is the most prevalent outdoor recreational activity in Door County, according to Jon Jarosh of Destination Door County, with biking following close behind. There’s still room for more trails, though – both in quantity and quality – for specific activities.

Take mountain biking, for instance. Brian Fitzgerald has been mountain biking in Peninsula State Park for 30 years, but he loves it now more than ever. He’s one of the organizers of the Peninsula Mountain Bike Club, which was started to connect area bikers who use the mountain biking trails in the park.

Unfortunately, Fitzgerald said, the mountain bike trails in Door County are lagging behind others in the state and Midwest: There’s little signage, less that’s accurate, and few ways to tell where you are when you’re in the park.

“You can grab a state park map, and that’s helpful,” Fitzgerald said. “But there isn’t really an actual system like a Black or Blue loop.”

The track that earns compliments – Fitzgerald’s personal favorite, and where he and other volunteers put most of their effort – runs parallel to Highland Road, but with the four or five more miles that will be added, it’ll be a dream.

The park has all the resources needed for a new trail, and for the past decade, bikers have been waiting on a master plan. With the draft submitted, Fitzgerald said, they hope to start work in the next month or two.

Eric Hyde, superintendent of Newport, Rock Island and Peninsula state parks, said the pace of improvements to the trail systems depends on fundraising and grants.

With the exception of the section of the Ahnapee Trail that runs through Sturgeon Bay, many cyclists use the area’s roads more than its trails. Though there is an eight-mile trail in Potawatomi State Park, for example, Superintendent Erin Brown-Stender said most bikers use the road.

The path connects along the Ice Age Trail (IAT), and while walking it, the jutting roots and surprise rocks tripped me up as a slow-moving hiker.

The IAT and the Tower Trail in Potawatomi are a good challenge, Brown-Stender said, as is the Yellow/Green loop in Whitefish Dunes, according to Superintendent Sarah Stephanik. But Stephanik recommends the Red Trail for most visitors. It has both a hiker and biker path that takes them right to Old Baldy, the highest dune in the park.

And for refreshing quiet, the Brachiopod Trail is her favorite. She can sit on the boardwalk and enjoy the sun and wildlife. But even with cloudy skies and rain soaking my jacket, I found that the trails were a revitalizing way to disappear for a while.