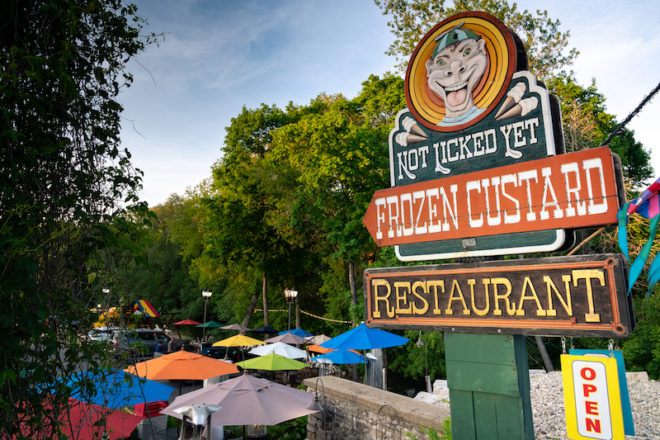 For visitors and residents alike, a trip to Fish Creek often involves taking a trek down a steep hill to get a dip or two of cold, creamy custard at Not Licked Yet: a custard and sandwich stand — and so much more — that’s been an institution in the area since 1982.

Owners Susie and Clay Zielke bought the property that literally kisses the banks of the actual Fish Creek (yes, there is one) and transformed it over the years from two cottages built in 1906 and a Spanish-American military barracks, into a frozen-custard stand and restaurant with indoor and outdoor seating, a playground, beautifully groomed and landscaped surroundings, and a booming business featuring four pickup windows, an extensive menu of custardy deliciousness as well as pies, sandwiches, drinks and more.

As scrumptious as the food, however, are the tantalizing humor, hospitality and friendliness that Susie and Clay show their customers. Many of their replies to questions are made with tongues firmly planted in custard-filled cheeks.

Clay and Susie recalled buying the property — which had housed a variety of businesses — and transforming the structures into the custard stand by literally building around the former barracks, collapsing it inside the new structure and walking the barracks materials out of the new building. It has been an institution in Door County ever since.

Clay and Susie are originally from Door County — Susie three blocks away from the custard stand, and Clay from Sister Bay. “I’m a transplant,” he said. Clay, who was vice president of Smith Barney in Green Bay when they bought the property, said they saw it on a Sunday, and by Wednesday it was theirs. “We were just going to do cookies and pies,” Susie said, “and Clay was going to do custard.”

“I’ve been a custard freak all my life,” Clay added.

So Susie set about running the stand with two babies in tow, which was why the ever-popular playground sprang up. She kept pretty much to a menu of custard, popcorn and desserts, using recipes she developed or inherited from her mother and grandmother. In 1985, they expanded the restaurant, and in 1990, Clay retired and joined Susie in the day-to-day operation. “It was getting just too much for me,” Susie said.

Shortly after, they added food to the menu, which took off right away.

“But I really hate cooking food,” Susie admitted. “I just like dessert.”

To this day, Susie can be found baking the cookies and pies using browned butter — “There’s a lot of browned butter around here,” she said — plus a little vodka in the pie crust. “It’s in the crust, mostly,” Susie said with a grin. “We just needed a little alcohol to make it crisp.”

And then there’s the custard. Clay’s love of custard — and his recipe — are pure, featuring a blend of cream, eggs, curds and whey, plus flavorings. The restaurant features chocolate, vanilla and butter pecan every day, as well as a special flavor of the day. It has a choice of between 500 and 700 different specialty flavors.

There is no schedule for the flavor of the day. “We just say, ‘Let’s do this,’” Clay said, and Susie added, “We lay the prayer shawl down and pray to the custard gods and see what comes up!” According to Susie, the most popular specialty flavor is probably Door County cherry vanilla.

Clay estimates that during a season, they go through about 6 million pounds of milk to make the custard. “The cheese factory and us are kind of joined at the hip,” he said. Susie added that everything is organic; the flour is non-GMO and organic; and they try to work with as many local suppliers as possible. And in terms of large numbers, they also go through about 7,000 pounds of beef during a season.

All of that attention to detail has paid off in a large, loyal customer base, with four windows operating at all times. “It’s gotten to the point of craziness,” Susie said, estimating that she and Clay each put in 108 hours every week during their season, which runs from May through October.

With that kind of schedule, it’s easy to understand why they both said that in the off season, “we sleep!”

They have about 20 employees who help out, with many international students making up their employee base. “We’ve had international kids for about 25 or 30 years,” Clay said. “We’ve had students from Romania, Czech Republic, Poland, Latvia and Lithuania. I don’t know how they hear about us. They just show up!”

So do the customers — some returning for more than one generation. Deb Wheaton of West Bend, Wisconsin, recently visited Not Licked Yet with her daughter, Sydney. Wheaton explained that she grew up in De Pere and often came to Door County.

“My dad was an avid connoisseur of custard, so he always made Not Licked Yet a priority stop. As an adult, I get to Door County only about once a year, and it remains a priority stop for me,” she said. “On my last visit, my daughter and I sat in the big, white Adirondack chairs out front and enjoyed the creamy, velvety custard, just like I used to do with my dad.”

Wayne and Betty Seifert of Kiel, Wisconsin, routinely visit Door County for a week in July. Wayne said they always make it a point to stop at the custard stand — if they can find a place to park — and Betty added, “The flavor of the day pulls us in! I also like the fresh fruit flavors like raspberry … Really, they don’t have any bad flavors.”

Despite all the hard work, Clay and Susie have no intention of slowing down. “We don’t have any other employable skills,” Susie said.