• Imagine a commercial fisherman in Door County pulling up his net and discovering a 45-inch long fish thought to have become extinct 70 million years ago. This actually happened in 1938, but not in Door County. Rather it was a South African fisherman who was surprised by a strange-looking fish called a Coelacanth. Previously known only from the fossil record, this creature was considered a species that might have led to marine vertebrates that crawled out of the ocean and lived on land. Why? Because it had lobed fins, complete with bones and joints, characteristic of land-living, four-limbed vertebrates.

Archeologists and biologists believe that lobe-finned fish, such as coelacanths, evolved into land animals with four legs. In fact, lobe-finned fish are more closely related to humans and other mammals than they are to ray-finned fish such as salmon and trout. The gene sequence of Coelacanths has now been mapped and it reveals that these “living fossils” share a gene sequence that helps promote limb development in humans and other land animals. Further study of the coelacanth genome should help identify other genes responsible for the transition from marine creatures to land vertebrates. (Nature, April 18, 2013; Higasa et al, Gene, vol. 505, 2012) 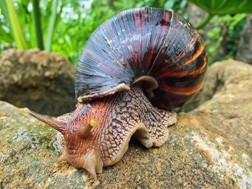 • In addition to tourists and pythons, South Florida is being invaded by the giant African land snail. Each week about 1,000 of the mollusks are rounded up, and since 2011 more than 117,000 have been caught. These are not your garden variety snails. Reaching a length of 8 inches and 4 inches around, they feed on more than 500 plant species. Their shells can puncture an automobile tire, and their feces and slime trails can create a slick mess on sidewalks and roads, and lawnmowers can hurl them through windows. Florida is at war with pythons and is now preparing to do battle with this giant mollusk. The good news is that they move at a snail’s pace and can be easily caught if seen. (The Week, April 26, 2013)

• Atmospheric carbon dioxide can persist for hundreds of years, all the more reason to try to limit its release from manmade sources. Global carbon dioxide has been recorded at a measuring station near the summit of Hawaii’s Mauna Loa longer than any other station. Its infrared analyzer has measured the concentration of this gas on a daily basis since 1958, when it reported 280 parts per million (ppm). This is about the concentration before the industrial revolution. In May of 2013, carbon dioxide concentration reached 400 ppm. Data from the Global Carbon Project suggests that human activities release about 10.4 billion tons of carbon dioxide into the atmosphere. Fortunately, about half of this amount is captured by terrestrial plants and photosynthetic organisms in the ocean. But the remaining five million tons or more will remain in the atmosphere for hundreds and hundreds of years. Being a crisis-driven society, by the time mankind takes action it may be too late to make a difference. (Nature, May 2, 2013)

• We seek to preserve the “wildness” of species, so what is wrong with American crocodiles flourishing in the cooling canals of a nuclear power plant in Florida, or cranes and other aquatic birds enjoying the wild life in a retention pond near a Walmart store? (For answers, read Wild Ones: A Sometimes Dismaying, Weirdly Reassuring Story About Looking at People Looking at Animals in America by Jon Mooallem, Penguin Press, 2013)