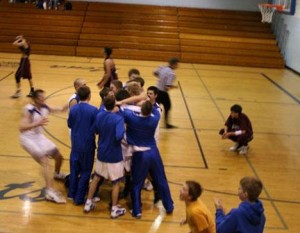 Gibraltar players celebrate after winning their third straight Lena Holiday Tournament title last night in dramatic fashion. Ryan Wimmer snatched a rebound on the right baseline and dropped in a 10-footer to give the Vikings a 49 – 47 victory over NEW Lutheran, which had stormed back from 13 down to tie the game. Sam Forkert was named tournament MVP for the second straight year. Tom Sawyer was named to the all-tournament team as well, and Alex Larsen was named to honorable mention all-tournament team.