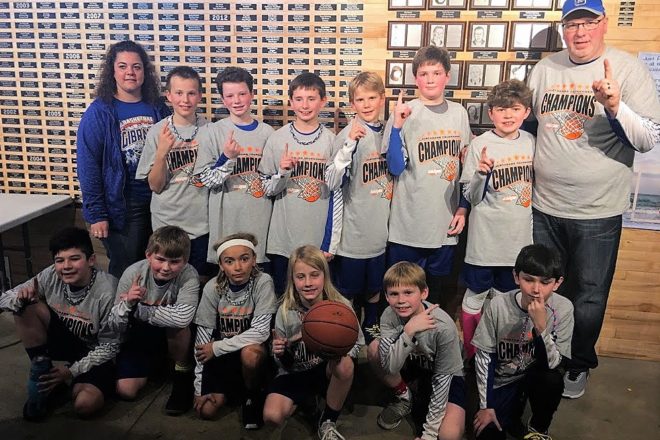 The first game against the team Limitless Stan, from Barrington, Ill., was a nailbiter with Gibraltar winning 31-29. Top scorers in that game were Braden Kita 14, Yahir Valdivia 8, Will Lecy 7 and Aaron Greene 2. This win set the stage to start the tournament off in the winners bracket.

​A special thanks to Noah Greene for keeping the scorebook accurate.​

Gibraltar faced the Libertyville Jcats, from Libertyville, Ill., in the second game and won 25-18. Scorers were Greene 10, Lecy 10, Kita 2, Valdivia 2 and Henry Annen 1.

Gibraltar ran away in the third game, winning 32-18 against Richfield. Scoring leaders were Kita 16, Valdivia 9 and Lecy 7.

All the games had great offensive play by Kita, Valdivia, Lecy and Greene, along with outstanding defensive play by Lecy, Jeffrey Mize, Annen and Valdivia.

The team was treated to a pizza party, organized by Steve and Jessica Sauter, to celebrate their wins. The team is coached by Jay Kita with Brenda Kita serving as Team Mom.