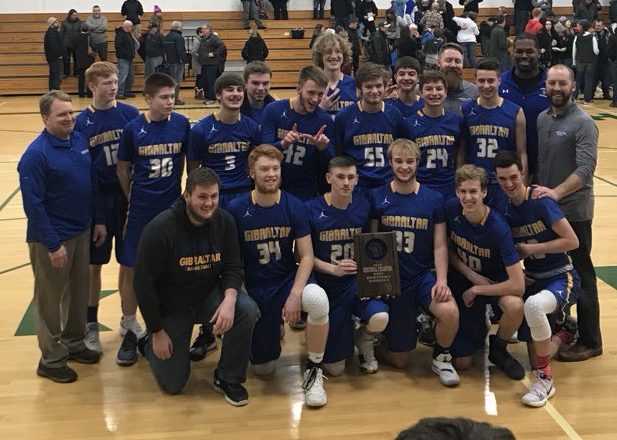 It will be an all Packerland boys basketball sectional semifinal in Division 5 Thursday in Green Bay. One team is used to being there, the other is a surprise to everyone but themselves.

The Gibraltar Vikings stormed to the regional championship Saturday, blowing by Phelps 63-32 and proving they were the class of a regional where they were seeded 5th.

The Vikings asserted their dominance early behind the scoring of seniors Trevor Reinhardt and Evan Henry. Reinhardt scored 9 of his game-high 13 points in the period, all coming from behind the arc. The tireless Henry added 7 of his 12 points as the Vikings pulled out to a 30-16 halftime lead.

Phelps had no answer for Gibraltar twin towers Henry and Brady Ash, who controlled the paint on the defensive end.

“We used it as more motivation in all three games,” Burress said. “Our guys were hungry and we used the travel time and the weekend together to really focus on the task at hand. We thought in our hearts we were the better team in all three games but I was not expecting blowouts.”

Gibraltar won its three tournament games by margins of 40, 29, and 31 points. They traveled 210 miles to Florence Friday, where they blew out the Bobcats 70-41 to earn the right to head down the road to Phelps, but rather than return to Fish Creek Friday night, the Vikings stayed overnight in Iron Mountain.

During the regular season, Packerland play regularly pits the Vikings against Division 3 schools. Burress said that helped prepare his squad for tournament play.

“We had two large goals at the start of the season: finish 500 or better and win a regional championship,” he said. “With our strength of schedule we knew that we needed to win at least half of our games to be in position to advance in the postseason. Playing division 3 and 4 teams also helps as we moved into division 5.”

The Vikings now face regular nemesis Green Bay NEW Lutheran, a perennial state title contender and Packerland Conference rival. The teams split their season series 1-1, and will face off at Ashwaubenon Thursday at 7 pm.  Burress said he likes the matchup.

“I don’t mind playing them again,” he said. “Scouting-wise, we know NEW more than any other Division 5 team. We can dive back into our film and see what worked and what didn’t. I think it will be a great atmosphere Thursday with two Packerland teams playing.”

Until then, this Vikings squad can revel in being able to call themselves something few other Gibraltar basketball teams have ever been able to claim: regional champions.

“It sounds and feels great!” Burress said. “This celebrates the hard work of the players, the support of family and friends, and the dedication from our coaches. We have been working hard towards this goal, but it’s not enough. We want to obviously move on in the tournament.”

In other action Southern Door fell to Valders in a Division 3 regional final. Read more on that game here>>