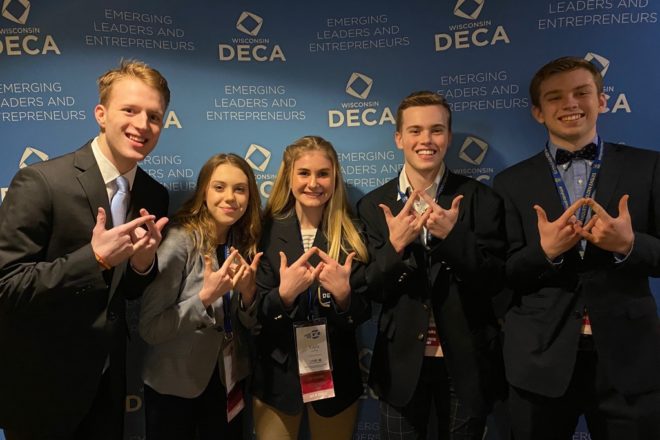 Double qualifying for ICDC is the team of Brandon Stillman and Connor Duffy, who earned first place in the Sports and Entertainment Marketing Team series – the largest event at the state conference. They also earned second place for their integrated marketing event campaign, which is a marketing proposal for the Fish Creek Winter Games. Aubrey Peot earned sixth place in the Business Finance Series; Jack Weitman earned eighth place in the Apparel and Accessories Series; and Kayla Scharrig was chosen to represent Wisconsin on the Emerging Leaders Council. The Gibraltar DECA team also received a State Award for Community Giving Acts of Kindness.

Gibraltar extends special thank-yous to Teri Berndt of Nicolet Bank and Mitch Larsen of On Deck Clothing Company for traveling to Lake Geneva to judge the hospitality and tourism and the retail merchandising events. In addition, Berndt and Jim Jordan mentored the students prior to their competitions.Unfortunately, due to the COVID-19 situation, this year’s ICDC has been canceled.