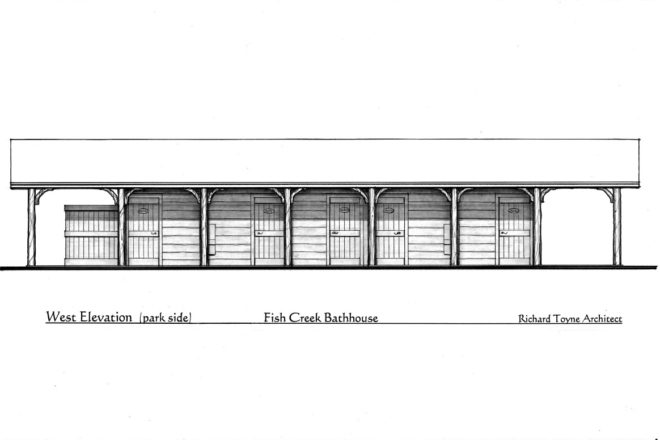 A rendering of Rick Toyne’s proposed design for bathrooms at the Fish Creek beach.

On a motion from elector Bruce Hill, seconded by Wayne Kudick, the electors of Gibraltar voted 102 to 14 to spend not more than $300,000 on a new bathhouse at Fish Creek beach, and that it be functional by the Friday before the 4th of July.

The meeting of electors was held Oct. 17 in the cavernous Gibraltar School gymnasium, not the most ideal location for the human voice to be heard. Sturgeon Bay architect Rick Toyne had been talking many minutes about his bathhouse research into a microphone that rendered his voice into a nearly unintelligible noise that sounded more like muffled gargling than spoken English. His presentation went on that way for some time before someone in the audience shouted out that she couldn’t understand him. Toyne carried on with his presentation on the bathhouses/public bathrooms of Door County without a microphone, which improved the sound somewhat.

Gibraltar Town Chair Dick Skare pointed out beforehand that questions should focus on coming up with a budget for the project, not about the building details, which is for future meetings.

Toyne had also been asked to look at a green roof, as in green grass a la Al Johnson’s in Sister Bay, which he said would add roughly $43,000 to the project, bringing it to about $315,000 total. He said he was fairly confident with cost estimates that led him to these figures.

In addition to assorted questions about specifics, several people took the opportunity to thank Toyne for his thoughtful design and the town board for moving this much needed project forward. One of those was Angela Sherman, who was there with her husband and two sons. She thanked the board for considering young families in the family friendly design of the bathhouse.