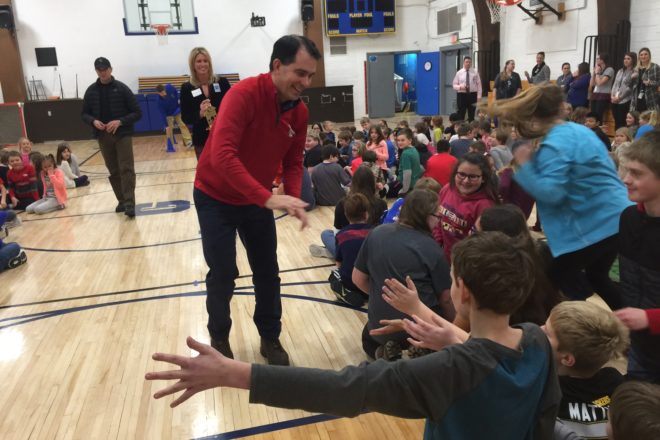 Governor Scott Walker touted the Wisconsin job market and a proposal to increase sparsity aid for rural districts during a tour of Gibraltar Area Schools in Fish Creek Jan. 11.

He told students that Wisconsin employers are desperate for skilled workers in a wide range of industries and encouraged them to stay in the state after college.

“Even if you go to college outside the state, we hope we can draw you back in,” Walker told the students.

The Governor touted two proposals aimed at rural school districts. One would increase sparsity aid by $100 per student in rural districts “to address the unique needs in transportation costs and size and scale of districts.”

Walker also expressed his support for an increase to baseline revenue levels for school districts that have been locked into lower spending levels since the limits were put in place in 1993. The existing floor is $9,100 per student. The change would raise that to $9,400 in 2018-19, and to $9,800 by 2022-2023, allowing schools to increase property taxes to that level without going to referendum. According to the Wisconsin Department of Public Instruction, the average annual per pupil spending in Wisconsin is $10,053.

The Governor said the “revenue adjustment will help substantially for school districts like those in Door County.” But the change would not immediately help any Door County schools.

Walker had vetoed a similar proposal last year, but supports the proposal now thanks to a stipulation that bars districts from increasing spending if they failed in a referendum vote in the previous three years. That tweak eliminates Southern Door School from taking advantage of the option. Southern Door failed to pass a revenue limit override referendum in 2017. The school wouldn’t be able to use the new authority for three years.

After addressing students Walker responded to questions on a variety of other topics, including Sturgeon Bay’s effort to enact a Premier Resort Area Tax (PRAT) to fund street repairs.

“I don’t see an interest right now in the legislature in adding any new taxing authority,” he said when asked if he would support the city’s request for the PRAT.

To enact the half-cent sales tax, city voters would have to approve it in an April 3 referendum. Rep. Joel Kitchens would then have to write special legislation or get it added to the next state budget, which would then require the Governor’s approval.

Earlier Thursday the Trump Administration issued guidance to states that allows them to require able-bodied Medicaid recipients to work or prepare to work through training, education or job searches to receive benefits.

“We think it’s a good thing,” Walker said. “We’ve done it in other areas.”

“For people who are physically and mentally able to work we should get them into the workforce,” he said. “I fundamentally believe that public assistance should be more like a trampoline and less like a hammock. We ask for two simple things: be ready to work and be able to pass a drug test.”

Sixty-eight million Americans receive their health insurance through Medicaid. According to an analysis by the Kaiser Family Foundation, 60 percent of the nation’s non-elderly Medicaid recipients work. Of the remainder, a third cited illness or disability for their inability to work, another third worked as caregivers, and 15 percent were in school.

Health policy advocates, including the National Health Law Program, have threatened to take legal action against the requirements, saying it violates Medicaid law. Health policy experts point to studies that show that stable health insurance coverage leads to higher rates of employment for the poor, and that the new requirement will inevitably lead to gaps in coverage.

In December 2017, 4,151 Door County residents – or 15 percent of the population – received health insurance through Medicaid, including 584 childless adults, the primary target of the change.