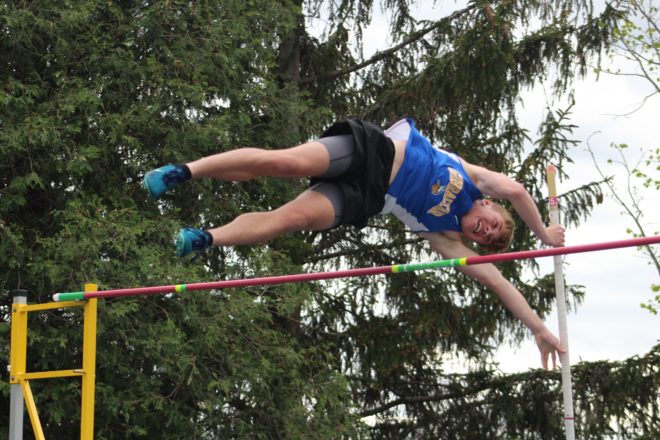 Gibraltar’s girls track-and-field team placed third Monday in the WIAA Division 3 Regional at Hilbert, and in the process, they qualified for Thursday’s Rosholt Sectional in nine of 18 events.

The Vikings’ 81.5 team points ended up only a point behind runner-up Howards Grove, with Manitowoc Lutheran topping the 12-team standings at 125. Door County’s other high school competing in Division 3, Sevastopol, placed eighth with 36 points.

The top-four finishes in each event qualified for the sectional.

Gibraltar’s Nida Zukauskaite qualified in three events by being the runner-up in both the high jump (5 feet) and pole vault (7-9) and coming in third in the 300 hurdles (50.94 seconds).

The Vikings’ McKailey Reisen added a second-place finish in the 100 hurdles (17.08).

The Vikings’ other individual qualifier was freshman Remy Carmichael, who placed fourth in the 400-meter dash (1:11.89).

Gibraltar finished ninth in the team standings with 42.5 points. Sevastopol, which had no sectional qualifiers, finished 12th with nine points.

Sheboygan Lutheran topped the boys standings with 114 points, followed by Hilbert (108) and Howards Grove (78) rounding out the top three.

The Eagles’ Andrew Kluth qualified by placing fourth in the 300 hurdles (44.37).

Sturgeon Bay, which placed ninth with 24 points, had two sectional qualifiers, with Espen Walker placing third in the high jump (5-10) and Craven Lautenbach finishing fourth in the triple jump (38-1).

Little Chute won the boys regional title with 131 points, followed by Green Bay Notre Dame (130) and Two Rivers (101) in the top three.The top-four finishers at Thursday’s Division 2 and 3 sectional meets, which took place after this issue of the Peninsula Pulse went to press, automatically qualified for the state meet June 3-4 at UW-La Crosse.