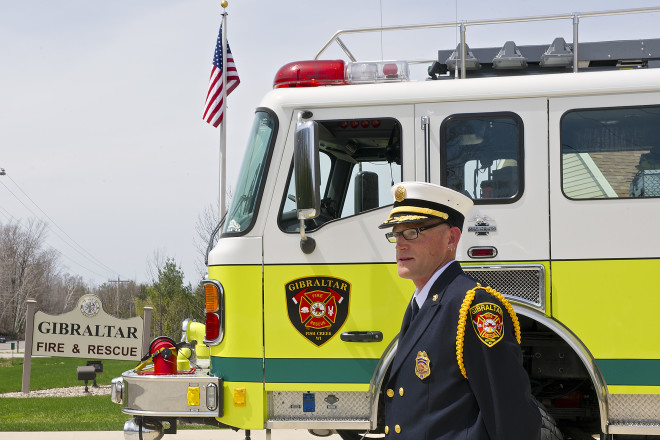 A special meeting of the Gibraltar Town Board on Feb. 11 opened with Fire Chief Caleb Whitney announcing his resignation.

“It is not because of politics, because of lack of support, it is simply a function of the economic life that I face,” said Whitney, explaining that he and his wife recently bought a second business. “I just can’t do what needs to be done on the day-to-day basis in terms of fire chief. I’ll still be part of the roster, still be part of the response and I very much want to be.”

The resignation is just one in the string of challenges the Town of Gibraltar is facing when it comes to public safety. The volunteers on Gibraltar’s Fire Department are aging, with two-thirds of the group being 40 years old and older within the next two years. Whitney has not been released back into active service after battling an Ephraim fire last year.

“It’s a young person’s sport,” said Whitney. “We’re at the crisis level in terms of emergency response so the only option we have is consolidation. You guys have always been supportive of the fire district concept. There’s no easy answers.”

In the absence of a unified fire district, where coordinated responses are required throughout all of Northern Door’s fire departments, that consolidation may happen within Gibraltar’s current net of public safety personnel. But the meeting brought forth some misunderstanding between the board and the heads of public safety.

The board recommended that Gibraltar Police Officer Andy Crowell be certified as an entry-level firefighter and emergency medical responder (EMR), but Crowell thought that three hats might complicate his duties.

“The only concern I have is you’re asking too much from one person. To be an EMR is continuous work. Once you get your certificate you’re not done,” said Crowell. “[Police] work as support for the fire department. We can’t just show up and take our uniform shirt off and put on a coat that says fire department. If we did that we would be opening up the fire department personnel to safety issues from traffic to keeping crowds back. We have a purpose as a police officer.”

As an EMR, Crowell also questioned his liability in leaving a victim he responded to in order to perform police duties around the site after another medical responder showed up.

Board members insisted that they weren’t asking for Crowell to run into burning buildings, but rather qualify for basic practices such as preparing the fire truck and to have a better understanding of how the fire equipment functions when the two departments respond to calls together.

Whitney first brought forward the idea of a public safety administrator to eliminate the paper pushing that he and Crowell are required to do. They spend dozens of hours each year updating equipment, keeping track of certifications, attending town meetings and planning budgets. All that time takes away from patrolling the roads and preparing for emergency calls.

“Right now, in the police department, I’m just doing it myself,” said Crowell about the administrative duties. “But I can see this evolving as this goes forward. Within a couple years this could be its own position.”

While board member Steve Sohns suggested hiring two separate chiefs, one for fire and one for police, Whitney kept the focus on a single administrator handling both departments for the benefit of communication.

“We’re used to working together. We’re trained together. That should be a whole lot more coordinated and that’s all background work that the administrator can do.”

With Whitney resigning and Crowell also looking to move into more administrative work as he gets older, the consolidation between police and fire will come at a cost.

In a phone call after the meeting, board chair Dick Skare said the town is still exploring its options, but some type of administrative position was already budgeted for.

The board considered hiring six full-time firefighters while hopefully contracting out to surrounding communities to reduce the estimated $750,000 annual price tag, according to Whitney. But that would require coordination and cooperation with nearby municipalities, which may be difficult after discussions of a unified fire district fell flat in the past few years.

Crowell stepping into administration may also require hiring a new law enforcement officer to stay on the roads. Crowell said that he is already looking for 20 more hours per week for patrolling during the summer.

In a phone call after the meeting, board member Brian Hackbarth said that no decisions were made on new expenses or new hires moving forward. “We just expressed that we were open to the inevitability that we would incur additional costs one way or the other. Whether we hire somebody else, a neighboring community, or just within us.” By his own volition, Whitney is one of the lowest paid fire chiefs in the county, which may change if a new fire chief is hired.

Whitney hopes to have a new fire chief appointed at the town board’s March meeting, and will continue to work with the new chief during the transition period while remaining on the volunteer roster.