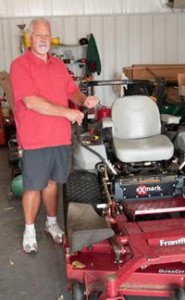 In 1989 Steve Higginbotham worked as a carpenter on Dennis Laaksonen’s crew helping to build Jim Grasse’s condo project. Grasse, who was on the Gibraltar School Board at the time, told Higginbotham about an opening in the maintenance department at school and suggested that he apply.

“The thought of a 9-month janitorial job with benefits sounded good,” Higginbotham said, “and I applied.”

When he interviewed with then Superintendent Bill Van Laanen, a few surprises awaited him. “I found out it was not maintenance staff, but maintenance supervisor!” Higginbotham said. “I didn’t know it was a 12-month job!” And he was hired.

As it turned out Steve Higginbotham was an excellent candidate for the position he has held for 22 years now. His work after moving to Door County in 1982, along with the jobs he had held previously, provided him with a good background for the various responsibilities that a school maintenance supervisor faces.

“I kiddingly refer to myself as a hillbilly,” Higginbotham laughed. “My whole family has a Southern drawl,” as they were West Virginians. When he was nine months old his parents moved to Northfield, Ohio. In high school he dated Kathleen Hall who was later to become his wife. They attended Kent State College together at the time of the shooting on campus.

His first job after college was for Bell Telephone as a construction lineman and later cable splicer, learning skills that he uses to this day. “The work helped pay off student loans,” he recalled, and as he and Kathleen were married, “helped us have more than popcorn for dinner!” And he enjoyed working outdoors.

After three years with Bell Telephone, he moved to Florida to pour concrete pool decks, learning more skills. “Masonry is outside-in construction work,” he said. “This gave me a nice background in construction.”

Following three and a half years of masonry in Florida, he returned to Ohio to work for a refractory company in Cleveland that dealt with a high-grade fireproof masonry product. Higginbotham served as an estimator and project manager, supervisory responsibilities that led to his next and most exotic job three years later as a procurement agent for the military.

The governments in Saudi Arabia and Nigeria were constructing and upgrading military facilities built to American base specifications. “It was a great background for me to learn,” he said, “meeting foreign businessmen, working through interpreters. A very interesting job!”

His work involving purchasing, expedition, tracking, and completing a project, helped him to understand why in military procurement “a hammer can cost $200 or a toilet seat $400: no one trusts anyone!” The red tape involving analysis, shipping, and certification all adds to the cost.

While the work was intriguing, it was also stressful. “We had to make a decision,” Higginbotham said. “Is this the lifestyle that we want? We had visited Door County and found it a safe and comfortable place to live, a good place to raise a family. My brother-in-law Kevin Hall lived here, and I met so many people who were willing to give a newcomer a chance.”

For a time Higginbotham worked as short-term subcontract labor, then a sales job opened at Lamperts, followed by the carpentry work that led to his present position.

While Higginbotham’s work experience had given him the skills he needed for the position at Gibraltar Schools, “I was taken aback!” he said. “I didn’t know what a supervisor did! George Jischke,” his predecessor who had retired because of ill health, “helped me make the transition.”

And Higginbotham found that adapting involved more than just learning his responsibilities. He and his wife Kathleen, who is a nurse at the Aurora Northern Door Clinic in Sister Bay, have five sons, Tim (the oldest at 41), Brian, Matt, and twins Alex and Zach (the youngest at 25). All but Tim were students at Gibraltar while Higginbotham was working as Maintenance Supervisor. Tim’s wife Becky is now a second grade teacher at Gibraltar, and their two children, Bailey and Sam, are presently students there.

“Having family in the building while I’m working is mostly a terrific thing,” Higginbotham said. “Problems sometimes come from the expectations of staff working with your offspring, but the pressure was more on them than me.”

The biggest challenge that Higginbotham faced was the building itself, as it had gone through multiple additions and remodeling projects.

“The problem that stems from many buildings being stuck together,” Higginbotham said, “is with utilities, with air flow,” maintaining a consistent comfortable temperature in each room of the complex. The installation of hallway ventilators a few years ago helped, as did the purchase of new hot water boilers and furnaces that also were more energy efficient. Now Higginbotham can control much of the new equipment by computer.

“My job is one of constant change and learning,” he said.

Higginbotham is pleased with the exterior appearance of the building, remodeling authorized by the last building improvement referendum. “The school looks more like a school,” he said, “more unified, the cement apron in front, new windows,” making the various additions to the complex blend into one structure.

He is quick to praise the Gibraltar School District for its history of being progressive in the maintenance of the facility, pointing to the installation of energy efficient windows and airlock entries. “The district always put money toward maintaining the building,” he said. And present steps toward energy efficiency, such as lights that automatically turn themselves off when no one is in a room, “help people to be more energy efficient and save money that can go toward other things – Smart Boards, computers, textbooks.”

For Higginbotham “the comfort level of students in the primary thing,” as they can more easily learn and conduct themselves well when they are comfortable.

Of course the Maintenance Supervisor is blamed when things go wrong in the building. “I have thick skin,” he laughed, “which is important in this job. I’m either the most popular guy, or the most unpopular! It can change from hour to hour!”

One of his favorite parts of the job is dealing with students. “I like helping kids,” Higginbotham said, “whether it’s unjamming their lockers or finding their lost iPods. It keeps me fresh and young!” He gets hugs from kindergartners and lower primary students who will remember him and become his friends in high school. “I’m not grading anyone. I’m an adult who is visible and can help them. I don’t mind being called Steve. Kids come back after high school and tell me about their life. It’s why I still enjoy my job; it’s the friendships.”

While friendships are nurtured because the school is in many respects a community center, that organizational function of the building also presents maintenance challenges. In an ideal world, the facility would be empty during the summer, allowing maintenance work to flow smoothly. But the music festival, antique show, summer and migrant school programs, meetings and expanding sports programs keep the building busy. Higginbotham works with a dedicated veteran crew, a careful schedule, and a set of priorities to accomplish the necessary work.

And Higginbotham pointed out that his job description includes “fill in where necessary.” Expect to see him riding a lawnmower or pushing a broom as well as supervising.

At age 59 he sometimes thinks about retirement and the opportunity to “work my own hours and take advantage of the uniqueness of a resort area community, play golf, fish, go to the Door County League baseball games on Sundays.” He’s been on the Sister Bay Bays Baseball Committee for over 20 years.

“But I enjoy the interaction with the kids,” he said. “I’m not ready to give it up. I’m going to ride it out for a while yet!”