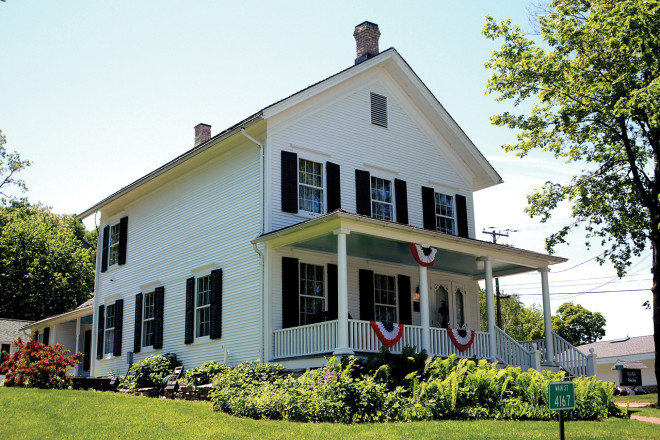 The Alexander Noble House is among the stops on Fish Creek’s Historic Audio Tour.Photo by Katie Sikora.

Walking through Fish Creek, one can see the vestiges of the community’s past: Greek Revival farmhouses, false front stores along Main Street, a tiny log cabin in Founder’s Square. There’s a rich history lying just under the surface – and now that history can be easily accessed by anyone with a cell phone.

The Gibraltar Historical Association (GHA) has created a self-guided audio tour of historic Fish Creek. The idea was inspired by a similar tour experienced by GHA President Barb McKesson in Springfield, Ill.

“That audio tour was really nice in that it gave you a quick history about where you were and what was happening historically in the country,” McKesson reflected. “I said, hey, this is really cool, this is something we need to do.”

The audio tour system is easy to use. Participants simply dial a phone number to access the audio guide databank. Participating buildings are numbered with blue tiles, and those numbers correspond to a short audio recording that tourists can select from the databank.

The tour starts at Clark Park by the marina, winds its way through the streets of downtown Fish Creek, and ends at Sunset Beach on the west end of town. There are 23 stops total; notable buildings include the Old Town Hall, The Gas Station and the Alexander Noble House.

“It has to be that quick spurt of information, enough to whet the appetite,” McKesson expounded. “Meaningful, yet short enough for people to listen.”

The convenience of the program is key: having the historical blurbs available at the push of a button means that visitors don’t need to do the whole tour at one time, and they don’t have to do it in order. It was one of the main reasons McKesson enjoyed the Springfield tour so much.

“I found that very pleasing, so far as the ability to continue when you wanted, as an individual,” she remarked.

The same idea can be applied in Fish Creek. Waiting for a table at the White Gull Inn? Punch in number 23 and find out how the cottages surrounding the inn got their names. Shopping at Founder’s Square? Take a break on a bench and learn how the building across the street, now the Whistling Swan, was transported from its original location in Marinette.

“You might do [the tour] over three days while you’re shopping, or while you’re walking to Sunset Beach,” McKesson said. “It is not so designated that you have to do it all at once.”

The main goal of the program is to make Fish Creek’s history accessible for all who wish to know it.

“We are really trying to make it viable for anybody at anytime,” McKesson stated.

To access the Audio Tour, dial 920.365.3711. Look for the blue number tile on the building you are interested in and type it into the keypad followed by the ‘#’ key. For more information, visit the Gibraltar Historical Association, 4167 Main St. in Fish Creek, call 920.868.2091 or visit historicnoblehouse.org.