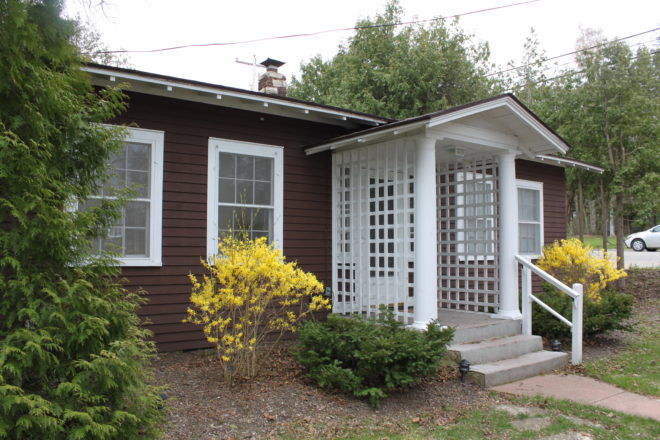 The Gibraltar Town Board hopes to repurpose the house, which was Ferdinand Hotz’s original Fish Creek cottage, into bathrooms. Photo by Jackson Parr.

The preservation of an old building on the expanded Fish Creek Beach property was the primary focus of the Gibraltar Town Board meeting May 5. The town hopes to repurpose the building as bathrooms when it expands the public beach.

“That building that we’re looking at is an historic building, it’s been here since about 1905,” said Barb McKesson, town board member. “That being said, we walked through it and it is in trouble.”

While the board did not take any action on the future of the building or the property, each board member expressed their thoughts to Pat Fehrenbach, senior architect at the civil engineering firm Short Elliott Hendrickson (SEH).

There was a board consensus to preserve the historic nature of the building as much as possible, but the state of the building and other potential changes on the property will leave few options for how to do that.

Board members considered placing the building on the eastern edge of the property if the parcel is rezoned, allowing for just a 10-foot setback. Under this option, cost will determine whether the town moves the existing building, or constructs a new building in the same style as the original cottage.

“The biggest thing I look at is the long-term maintenance,” said Steve Sohns, board member. “Architects nowadays can replicate things.”

“If we were to build a new bathroom facility it would certainly have concrete floors, drains, something more durable and long lasting for that kind of environment,” said Fehrenbach.

“One of the major things we’re looking at is opening up the view as people traverse east or west,” said McKesson. “Right now there’s so much of that bay that you don’t see because of that building.”

Rebuilding a bathroom facility on the eastern edge of the property could also cover up a new stormwater drain system between the highway and the bay. 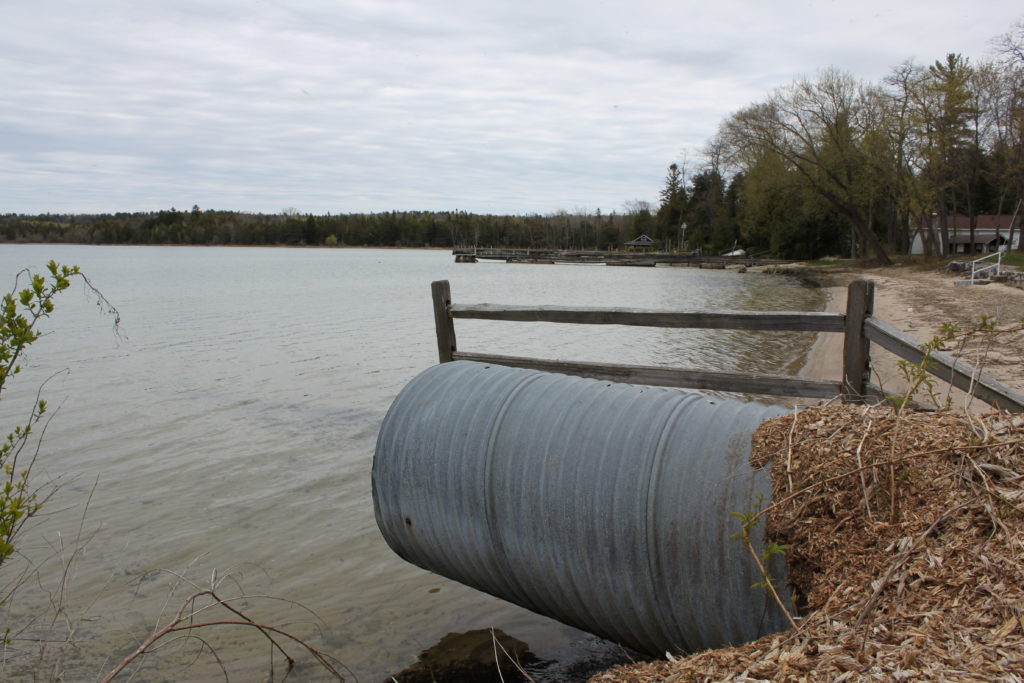 The current stormwater sewer pipe on the west side of the beach is believed to be the cause of beach closures as tainted water is dumped into the swimming area. Photo by Jackson Parr.

Board members and town residents find the current stormwater pipe unsightly. Its placement on the western side of the beach is also believed to be the cause of several beach closures as the current of the bay moves the stormwater runoff into the swimming area. The board expects relocating the outfall to the eastern property line will keep the beach water cleaner.

Fehrenbach will take all recommendations and draw up options for the town board to review at its June 7 meeting.