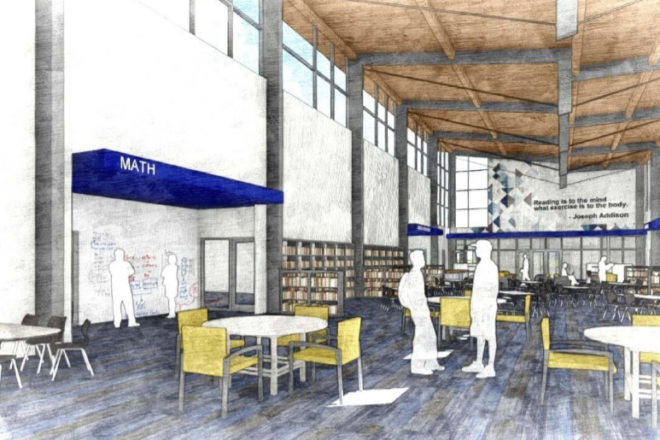 Final bids for this summer’s library reconstruction at Gibraltar School came in at $470,000 more than its original budget, Superintendent Tina Van Meer confirmed.

Tom Zeise of Zeise Construction, the project’s general contractor, said there are several reasons, but the main one is the increased cost of steel and aluminum: the result of tariffs on imported steel implemented by the Trump administration last year.

The start of construction also revealed that the roof will need more reinforcement than was initially determined, Van Meer said. Its 1970s design does not meet today’s codes. The plan also calls for an extension of a wall around the library and classrooms, and architects will need to account for additional snow load on the structure.

Torrential rainfall through the roof during construction may have caused some residual effects that the board will also have to account for.

“There are unforeseen challenges that occur during a construction

project of this magnitude,” Van Meer said. “In this case, we are talking about proper reinforcement for the roof.”

Finally, Zeise said the current bidding market is challenging: he is seeing an increase in labor costs due to the shortage of workers.

“We are always concerned when a project is over budget,” Van Meer said. “Unfortunately, we have no control over tariffs and the labor market.”

A substantial cushion was built into the bidding process for overruns, board President Mark Weborg said, but these costs were unforeseen. The contractors have signed a contract that prevents them from raising prices too much. “It’s more the price of the equipment that’s costing us quite a bit more money,” Weborg said.

Taxpayers should not be concerned about the overrun, Weborg said. If the school would have to dig heavily into the operating reserve, then it might be cause to go back to referendum sooner than was planned.

“We are trying to reduce our budget as much as possible so that we can prolong that as long as possible,” Weborg said.

Voters approved a $4.5 million referendum for the project in November 2018. The project includes a remodel of the library and adjacent classrooms, upgrading safety and security, creating additional meeting and support space, and acquiring furnishings, fixtures and equipment.

“The board is committed to providing the product that was promised via the referendum, and that will happen,” Board Treasurer Fred Anderson said. “If we do need to move some money out of our operating reserve to do so, that’s what will happen.”

The operating reserve fund accumulates over time and is meant to provide support during times of negative cash flow. As of September 24, 2018, the reserve fund totaled $4,543,254.

That means looking at the 2019-20 budget to see how construction costs can fit in, and the reserve funds will be used accordingly. Portions of next year’s budget were approved at the June 24 board meeting.

Van Meer is also looking at other ways in which the school can save money, such as reusing existing classroom furniture until it can be replaced in future years.

“I also continue to work with Tom Zeise on ways that we can cut costs without significantly impacting the project that our taxpayers voted for last November,” Van Meer said.

The district will be taking on another project to renovate the softball infield and outfield, including the dugouts. The current field is in poor condition and poses safety issues, Van Meer said. They don’t have a bid out on the project, but the board approved renovation based on quotes received.

“The girls currently have dugouts constructed of chain-link fencing. It does not keep out the wind, rain or other weather elements that come with spring sports,” Van Meer said. “The district wants to ensure that our female athletes are provided with similar playing conditions as our male athletes.”