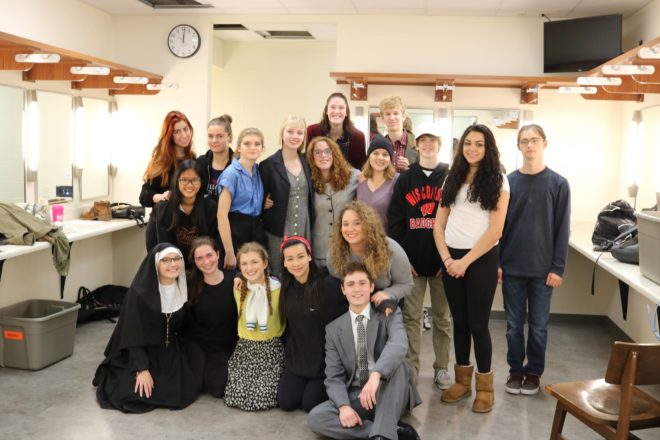 Yes, they’ve done it again! For the 11th time since they first entered statewide one-act play competition, Gibraltar students and director Lizz Thomas have made it to the finals and will be competing for top honors at the University of Wisconsin – Stevens Point, Nov. 17-19.

“We started in 2004,” Thomas says, “with a play called Jenga, and we lost at district, the first level of competition. But we learned a lot and went to state the next four years. Our 2006 entry, Us and Them, was especially interesting. It was a contemporary play that dealt with the fear of the unknown, including the fear of people not like yourself. In the end, the characters found that the ‘others’ were exactly like themselves.”

In 2007, the Gibraltar troupe won the first of five Ensemble Awards. “This is such an honor,” Thomas says, “because it recognizes that everyone working together makes the show, it’s not just one person standing out.”

Soon after she began directing one-act plays, she decided to turn to classical works by iconic directors, including two “story theater” productions by Door County resident Paul Sills, who created the format. “We also started doing three little vignettes from each play,” Thomas says, “because it allows us to involve more actors and allows actors to play multiple roles.”

That first Ensemble Award was just the beginning. Since 2007, the troupe (which, of course, changes every year as students graduate and others enter high school) has also won an award for best stage crew and twice for best director.

2010 was a “sweepstakes year” for the Gibraltar cast’s production of three vignettes from David Ives’ play, Time Flies. It won the Ensemble Award, the Critics’ Choice Award and the Director’s Award.

Despite Gibraltar’s frequent winning of the Ensemble Award, two cast members have also garnered Best Actor awards. Brandon Bogenschutz won in 2010 for the Ives vignettes, and Evan Board took the award in 2014 for Story Theater and in 2015 for Twilight Zone, an in-house adaptation of the script when the school was unable to get the rights for the original play. Brandon is a recent graduate of the University of Wisconsin – Stevens Point theater department. Evan is a sophomore at Oberlin College in Ohio and is active in the school’s theater department. It’s interesting that all three years the boys were recognized as outstanding actors, Gibraltar’s entries also earned the Ensemble Award.

In addition to all the other honors in 2010, Seussical the Musical, the musical Gibraltar had produced the previous spring, won the Theatre Festival Showcase Award. A video of the show was submitted to a “jury” composed of top directors in the state and was selected to be performed before the entire crowd of about 1,200 students and directors from all over Wisconsin who had advanced to the top level of competition.

“It was the most wonderful experience,” Thomas says. “Gibraltar was the smallest school ever to win the honor of doing Showcase. You can’t imagine the thrill for the kids when the audience gave them a standing ovation before the show was even over!”

This year’s entry is Tracks. Other than Gibraltar’s first entry in 2004, Tracks is the only one-act that did not make it to statewide finals. Why do it again? “That was a hard loss,” Thomas says, “because we’d been so successful in the preceding four years. It’s a wonderful piece, and I wanted to give it another chance. It involves 10 actors and a stage crew of eight. This production will have a different twist. Cellist Lia Smith, a freshman, will accompany the play with improvisational music.

“The actors, who are nameless in their roles, identified only by their professions, find themselves together in an unfamiliar location, not knowing where they’re going,” Thomas explains. “It’s a big challenge for the kids to dig very deep within themselves, searching to understand what their previous lives involved and what has happened to them.”

Door County residents are invited to see a free performance of the show in the Door Community Auditorium at 7 pm on Nov. 15, just two days before the cast heads off to state competition. There are no fears that the 13th time will be unlucky. Statewide competition is always a challenge, not only to the actors, but also because the troupe has just 40 minutes to set up, perform and take down their set.

“But it’s such a wonderful opportunity for the kids,” Thomas says. “That’s why I keep doing it. We represent a small school, and at state our team can attend workshops, see other productions and interact with other students and directors from all over Wisconsin.”

Speaking of numbers, Tracks is the 42nd production Thomas has been involved with at Gibraltar, including a fifth-grade musical in 2000, middle-school plays from 2008 to 2011 and every high school musical since 1992.