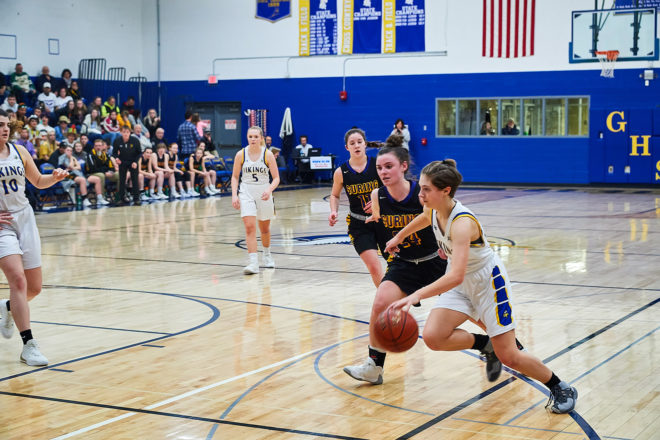 Balanced attack sends Vikes to round 2

Following an uninspiring, 63-43 loss to Gillett on Jan. 7, the Gibraltar girls basketball team found itself in a tough spot. After a 3-1 start, the Vikings had lost five consecutive games to fall to 3-6.

“At that point, I wasn’t sure how the season would turn out,” said first-year Gibraltar Coach Devin Thomas. “Our team was in a rough patch at that time, and we had lost some confidence. It was our third game in five days – all on the road.”

Since the loss to Gillett, Gibraltar has won 11 of 14 games and finished second in the Packerland Conference behind Kewaunee. The Vikings earned a rematch with Gillett on the road Friday following a 58-38 win over Suring in the opening round of the Division 5 regional tournament Tuesday.

“I think the rematch is a good thing, and it was inevitable,” Thomas said. “I think the girls want to go out and prove that the game in January was not the true identity of our team.”

“Great team win,” Thomas said after the game. “We had a lot of girls step up tonight. I couldn’t be happier with the performance from top to bottom from the girls tonight.”

The Vikings put the game out of reach with an 18-7 run to start the second half. Moroney started the run with a basket on the first possession, and after Alexander scored on a rebound, the Vikings held a 45-20 lead midway through the second half.

“We pride ourselves on being a second-half team,” Thomas said. “We knew that if we played our brand of basketball, we could go out and finish the job. Our defense held them in check for a good stretch, and it allowed us to stretch the lead.”

Karissa Schaal and Aubrey DeBauch pace Gillett – 16-6 and runners-up in the Marinette and Oconto Conference – with 18.2 and 15.2 points per game, respectively. DeBauch grabs 10.5 rebounds per game, and Schaal averages 10.5. For the win on Jan. 7, Schall and DeBauch combined for 40 points and 18 rebounds.

“DeBauch is athletic and long, and if we can stop her from getting to the rim, that is the recipe for stopping her,” Thomas said. “Schaal likes to get out and run. She likes to go for steals and score in transition. We will need to move our feet to stay in front of them and make them shoot over our closeouts.

“I always tell the girls that if we play our game and play hard, we give ourselves a chance in every game.”