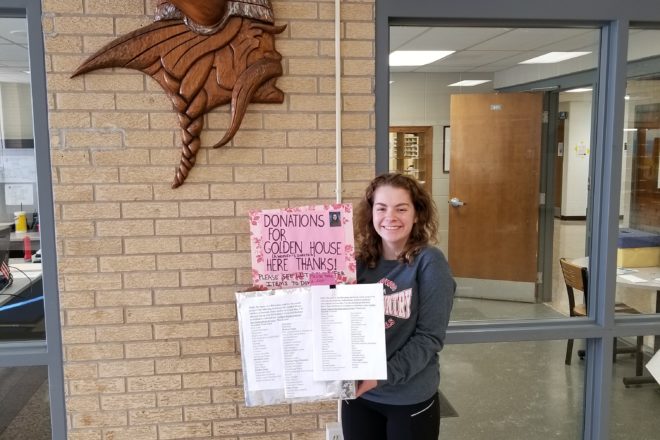 Gibraltar High School Senior Ava Hitzeman set up a self-defense workshop and a donation box for Golden House in Green Bay as part of her senior service project. Submitted.

Gibraltar High School Senior Ava Hitzeman took a realistic view of her world when she came up with her senior service project by thinking ahead to when she attends the University of Wisconsin-Madison in the fall.

“Going off to college next year and coming from a rural community, I was a little concerned because I don’t know any self-defense and I know a lot of girls my age feel the same way,” she said. “We haven’t really been challenged. That’s good, but going to a big city, it’s best to be prepared.”

Her first thought was to go online, learn about self-defense and teach the class herself, but she quickly realized she was out of her depth.

“After doing some research, I found an organization that was willing to donate their time,” she said.

She contacted Herb Blue’s Total Self-Defense in Green Bay because it offers a women’s self-defense workshop. She set up the class to be held in the community room at Gibraltar at 6 pm on Jan. 12, and is hoping to share it with 25 other girls.

“I’m keeping it mostly senior girls, but if we have to get juniors to fill a class, we’ll do that,” Ava said.

The folks at Herb Blue’s Total Self-Defense suggested their payment could be two canned items from each participant, to be donated to the Golden House in Green Bay, an emergency shelter for abused women. Unbeknownst to Ava, the Golden House has a Door County connection – in 1984 Thomas Lutsey, now owner of Waseda Farm, donated a five-bedroom home that became the shelter. Lutsey was also a major contributor in the early 1990s when the program grew to an 11-bedroom facility capable of housing 40 women and children.

“It was their idea to have people pay for the class by donating two food items,” Ava said. “I thought it would be beneficial if I extended the donations to the entire school, so put out two donation boxes to make their trip more worthwhile.” She will collect donations for Golden House through Feb. 23.

Ava said as stories began unfolding in the past year about sexual harassment and abuse in the entertainment industry and politics, it made her project even more relevant.

“It’s coming at a good time,” she said. “More even than defending yourself, it’s the whole empowerment thing and the movement of women sharing their voices. Empowering women, the more we can do, the better.”

“It’s great,” she said. “I love it when young women want to take advantage of courses like this and build themselves up.” She added that Sensei Blue began the women’s self-defense program because he grew up with five sisters, and recognized the need to promote self-defense for women.

Rawlins said this basic self-defense class will teach the participants how to stand up for themselves.

“That’s the best thing they can learn in life – building confidence, self-discipline and control,” she said. “We don’t go right to self-defense. We start with being aware in order to avoid situations, and then getting away from those situations.”

She said the techniques she and fellow instructor Aaron Maternowski will teach rely on leverage rather than strength. Using those skills, Rawlins said the students, no matter their size, will be able to stop 6’5”, 300-pound Maternowski.

Rawlins said some workshop participants want to further their knowledge after the basic course by enrolling for martial arts courses.

“Martial arts is more of a journey of yourself,” she said. “You do learn self-defense, but it’s more about discovering yourself and how to adapt to anything.”

Bremer started the service project program for her students last year in the wake of several students who have died in the last few years.

“I saw students wanting to make a difference but was not necessarily seeing the skills or the resources to get the job done,” she said. “I saw a lot of that after Bo [Johnson] passed and after Olivia [Dahl] passed and after Tess [Erickson] had passed. Having all these kids with grief and hope for something, they needed to channel it into doing something. I really wanted to provide them with an experience that was both service oriented but also provided them with skills that were real life. I wanted them to know how to do research about something they were passionate about. I wanted them to create a relationship with an adult in the community, know how to set up meetings and make phone calls. They’re terrified of getting on the phone.”

After students have completed their project, they have to write a research paper on their findings for Bremer, and then they make a presentation to their class. Each class then picks the best five to 10 presentations, and those students then make their presentations to the entire school in May.

“So many of  our young women from Gibraltar go off to bigger schools and express concern about going to a big city when they come from a quiet, relatively safe community,” she said. “I’m really proud of Ava for picking this, seeing it through, and getting someone from Green Bay to come all the way up here.”