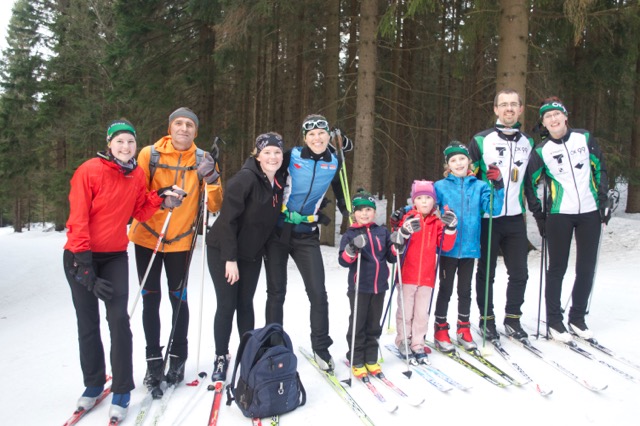 Marcy, third from left, on a ski trip with her hosts, the Ruźicovi family and their friends. Submitted.

She dreams about the bread. Although the 11 months Marcy Desotelle spent as an exchange student in the Czech Republic included two wonderful families that embraced her as a daughter, the opportunity to make friends from all over the world, acquiring fluency in a difficult foreign language, hiking and skiing in the mountains and two weeks of travel in France, Spain and Italy, it’s the amazing Czech bread that floats through her dreams.

By the end of her junior year at Gibraltar High School, Marcy had enough credits to graduate. She had long yearned to travel abroad, and being sponsored as an exchange student by the Rotary Club of Door County North made it possible.

The Czech Republic is a mountainous country, surrounded by Austria, Germany, Poland and Slovakia, the other half of the former Czechoslovakia that split in 1991. The city of Hradec Králové, where Marcy stayed, is 90 minutes by train from the capital of Prague.

From her arrival on Aug. 26, 2015 until the end of January 2016, she lived with the Bartovi family. One of their sons was currently a Rotary exchange student in Minnesota. His brother had been an exchange student in Canada the year before and was then away at college. (Rotary has a rule that families of outgoing students must be willing to host a student from another country.) Although her host parents, Jitka and Zdeńek, spoke no English – and despite a summer of intense study, Marcy’s Czech was minimal at that point – she describes the Bartovis as the “perfect family.” 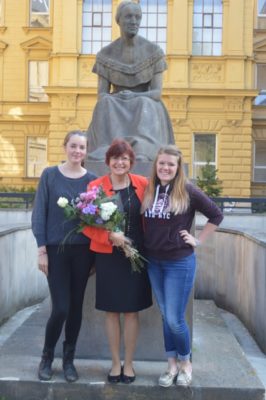 Marcy Desotelle, right, on the last day of school in the city of Do Hradce Králové in the Czech Republic, with the head teacher for her class and an exchange student from Canada.Their school is in the background, and they’re in front of a statue of Bozena Nemcova, a famous author of children’s books.

As the only young person, with adults who both worked at home, it was a very quiet household, where Marcy had a great deal of one-on-one time. “We all grew in our language skills,” she said,” but confusion about the time of appointments was sometimes a problem.”

The Bartovis are mountain climbing and skiing enthusiasts who had pursued their hobbies in Mongolia and New Zealand. They were sports unfamiliar to Marcy, who grew up in Egg Harbor, but she gamely joined their expeditions.

“On one of the first climbing trips,” she said, “I thought we were through for the day when we stopped to eat, but no. We continued to climb until dark. Going up the mountain was hard, and coming down was worse, but the scenery was awesome.

“On another climb with friends of the Bartovi family, one of the men spoke just one word of English – beautiful. That night we all slept in a room above a little restaurant that had 50 cots and a fire to dry our clothes. There was no running water, so we brushed our teeth and washed our faces in a mountain stream.”

The other activity Marcy enjoyed with Jitka was cooking. “The Czechs love to eat,” she said. “On Saturday mornings, we baked or made lunch, the biggest meal of the day. I learned to make Czech dumplings that are delicious with whipped cream and berries on top.”

On the weekend after Thanksgiving Day in the U.S., Marcy prepared Thanksgiving dinner for the Bartovis and a group of their friends, all of whom stayed overnight. “We did it on the weekend,” she said, “so the adults were off work. I had permission to miss school on Friday to start cooking.

“We had a really, really big turkey – too big for the oven – but Zdeńek is a big guy, and he wrestled it in.”

Marcy had called home for recipes for some of the meal that included stuffing, mashed potatoes, carrots, corn on the cob (really hard to find) as well as pumpkin and apple pies.

Noting that many Czechs are not very religious, Marcy, a devout Methodist, said she was lucky that Zdeńek led the band in a “new age” church. He had translated into Czech some American hymns that Marcy had learned at church camp and could sing along with the congregation.

The Ruźicovis, her host family for the second half of the school year, were also delightful. From a very quiet house, Marcy moved to a lively one with parents, Kamila and Ivan, teenage brothers, Adam and Karel, and six-year-old sister, Magda. The constant activity reminded Marcy of her family in Egg Harbor – parents, Paula and Larry, older brother, Joe, and younger brother, Ben. 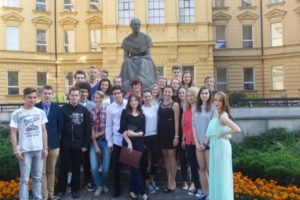 The students in Marcy’s class and their main teacher on the last day of school in the city of Do Hradce Králové in the Czech Republic.

Ruźicovi means “little rose” in Czech, and the Ruźicovis called themselves the Five Little Roses. Marcy, whose middle name is Rose, fit right in as the Sixth Little Rose. The whole family convened in their sauna every night after dinner, followed by showers, jammies and a second dinner.

“I had to get used to listening to five people talking at once – and no one speaking slowly,” Marcy said. “We always planned to have a night where we all spoke English, but that never happened.”

While Marcy’s Czech was quite fluent by that time, her pronunciation was gently corrected by Magda, who loved to be read to.

The Ruźicovis’ passion was orienteering, a sport where one uses a map and compass to navigate around a course, normally in woods, to reach a list of checkpoints. One of their sons had won a European championship. They also cross-country skied near their vacation cottage on the Polish border. The family also included their adorable Babicka (grandma), a purple-haired 82-year-old, who is still an avid skier.

At the “gymnåzium,” a high school for students preparing to be doctors and lawyers, Marcy took the place of her host brother in a class of 30 that stayed together all day, while teachers moved from room to room. The class schedule was different every day. College is free if completed within six years of finishing high school.

Marcy has high praise for the Rotary Club in Hradec Králové, which has only male members, but included her in all their meetings. One of the men, whose family had been making violins for hundreds of years, gave her weekly lessons on his own violin. With the national organization, the local club provided many opportunities to travel. These included a weekend with all the incoming and outgoing exchange students (interesting because many of them had not yet become well-acquainted with their new language), a monthly get-together with all the exchange students in the region, who also gathered in Prague for Christmas, and a two-week tour of France, Spain and Italy. Highlights were seeing the Eiffel Tower at night while munching on crêpes, touring the Coliseum in Rome and the Basilica of the Sagrada Família in Barcelona, still under construction after 133 years.

Marcy was still in Europe when her class graduated from Gibraltar. Although she is sorry to have missed the activities of her senior year, spending 11 months more than 3,500 miles away from Door County taught her many other lessons. Marcy said she learned how to handle the complexities of travel with ease. “I know people from all over the world,” she said, “and I’ve learned that wherever you go, people are basically the same. I’m more open to different things and am better able to handle situations that would have once been uncomfortable.”

That includes living by herself in an apartment in Madison and figuring out what she wants to do with her life. Right now, she’s attending Madison Area Technical College, preparing to transfer to UW-Madison, where she plans to major in chemistry or biology and languages, “So I can work anywhere in the world.”