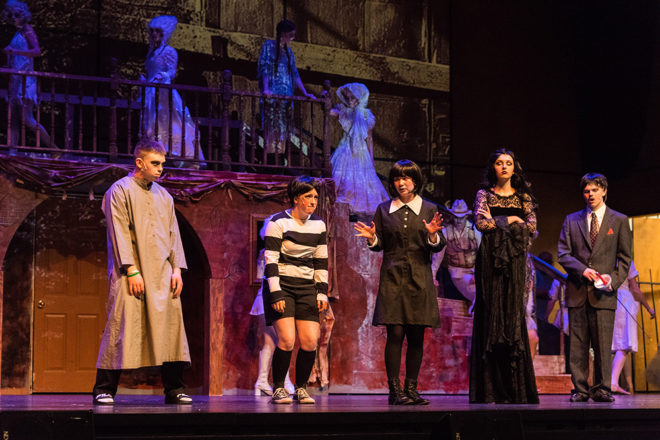 Door County has seen its share of celebrities through the years, but the family that will appear at the Door Community Auditorium (DCA) this Friday, Saturday and Sunday has been nationally famous since the 1930s and internationally loved since the mid-’60s. You’ll know immediately who the multi-generation family is when you see the names of its members – Gomez, Morticia, Wednesday, Pugsley, Lurch, Uncle Fester and Grandmama.

Lizz Thomas, whose “day job” is teaching kindergarten at Gibraltar, chose The Addams Family as the 29th musical she’s directed because it focuses on family life and the changes every family goes through. (There’s a bit of personal involvement, too. Lizz and her husband, Kurt, are preparing for a son’s wedding this summer and an eventual empty nest.)

“After the tragic losses the high school and the community have faced in recent years,” Lizz says, “I thought a comedy was appropriate. This musical is full of laugh-out-loud moments, but there are also some tearful ones – just like real life – and like the mood in the country during the waning years of the depression, when the Addams family first became popular.”

Charles Addams drew cartoons for The New Yorker magazine from 1932 until his death in 1988. Only two dozen of them included characters that came to be identified as the Addams Family, but those are the ones for which he became famous and that led to the TV show in the 1960s and an updated version in 1998-99. (Were the characters based on Addams’ own family? Could be. One of his weddings took place in a cemetery. The design of the Addams’ mansion was based upon two homes young Charles was caught breaking into, and his second wife is said to have combined Morticia-like looks with diabolical scheming.)

Lizz notes, “The Addams Family cartoons delighted in turning upside down peoples’ assumptions about normality and its relationship to good and evil and to pose the question: what’s normal anyway?”

It was Addams’ combination of gothic horror and hilarity that inspired Marshall Brickman and Rick Elice (book) and Andrew Lippa (music and lyrics) to write The Addams Family musical that debuted on Broadway on April 8, 2010. Since then it has been performed in at least 11 countries. 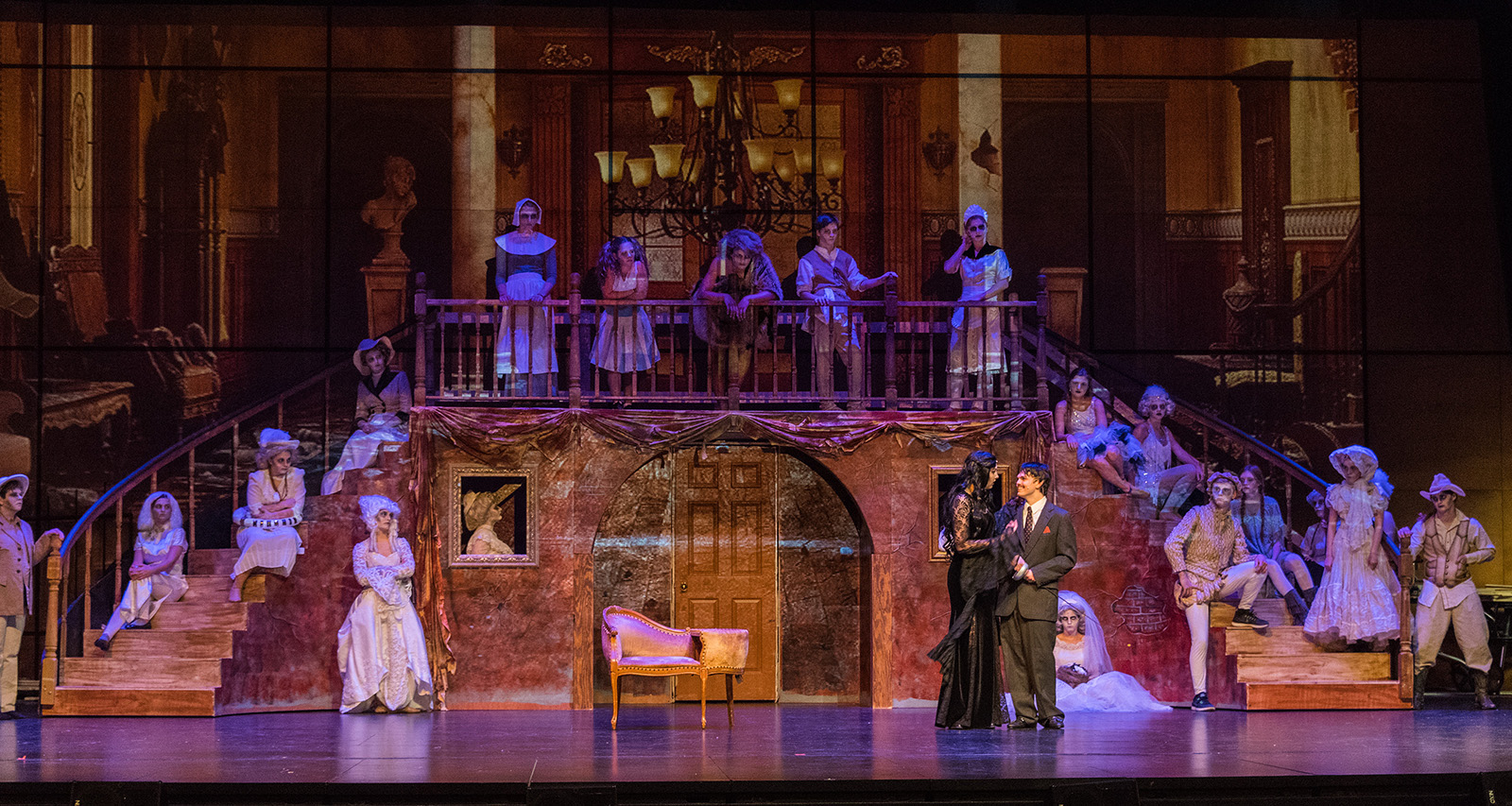 The Addamses have lived by their unique values for hundreds of years, and Gomez and Morticia, the patriarch and matriarch of the clan, would be only too happy to continue living that way. However, their dark, macabre daughter Wednesday is now an 18-year-old young woman who has fallen in love with Lucas Beineke, a sweet, smart boy from a normal, respectable Ohio family — the most un-Addams-sounding person one could be. And the Addams family must face up to the one horrible thing they’ve managed to avoid for generations: change.

Thomas especially loves the songs that touch on so many emotions families experience. While death is a favored topic in the Addams household, life is an equally important one.

“With life comes change and evolutions that cannot always be explained,” she says, “but must take place in order to bring you one step further over the tightrope of life.”

Shows on April 28 and April 29 are at 7 pm at the Door Community Auditorium. The show on April 30 is at 2 pm. Tickets for students and senior citizens are $5; adult tickets are $10.

“Sometimes,” Lizz says, “the stress of getting a show ready for an audience gives you second thoughts about your motivation, and the fear that you are going crazy overwhelms you. But on that day when you throw your hands up and are ready to go into seclusion, you receive a message like this from a first-time cast member:

‘I am absolutely loving this play so far! Thank you for casting me in this role and for believing in me!’

“This message makes the whole thing worthwhile. If you can reach just one person and give them a new perspective, a life-changing experience, and the feeling that someone believes in them, that is what theater is all about.”