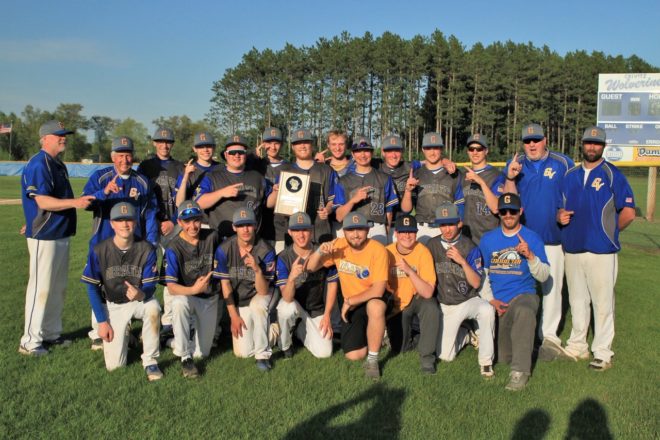 Gibraltar defeated Crivitz 11-3 to win its Division 4 baseball regional title Wednesday. It was the second consecutive title for the Vikings.

“It’s a great feeling winning a regional title two years in a row,” Gibraltar’s Trevor Reinhardt said. “We have come together at a good time.”

The Vikings move on to play No. 4 seed Niagara Tuesday in the sectional semifinal in Crivitz at 1:30 p.m. The Badgers advanced by beating No. 3 seed Laona-Wabeno 12-0.

The Vikings jumped out to a 3-0 lead on a bases-clearing double in the second inning from Alex Laughlin. The Vikings put the game out of reach with four runs in the fifth inning and seventh inning. Brandon Stillman added a three-run double to fuel the Vikings’ offense.

“It was a very exciting way to put the first runs of the game on the board,” Laughlin said. “It gave us some momentum to keep our bats alive.”

The victory sets up a sectional semifinal matchup with Winnebago Lutheran Tuesday at 5:30 p.m.

After taking a 1-0 lead in the first inning on Jake Schneider’s RBI single, the Clippers added three runs in the fourth inning. Anthony Jennerjohn, Andrew Carbajal and Ryan Jacobson each had an RBI. Sturgeon Bay added a run on a Valders throwing error in the fifth inning.

Schneider and Isaac Berkley combined on a 3-hit shutout. Schneider went the first five innings and Berkley went the final two innings. Jacobson went 3 for 4, Carbajal went 2 for 5 and Mitchell Jackson went 2 for 4.