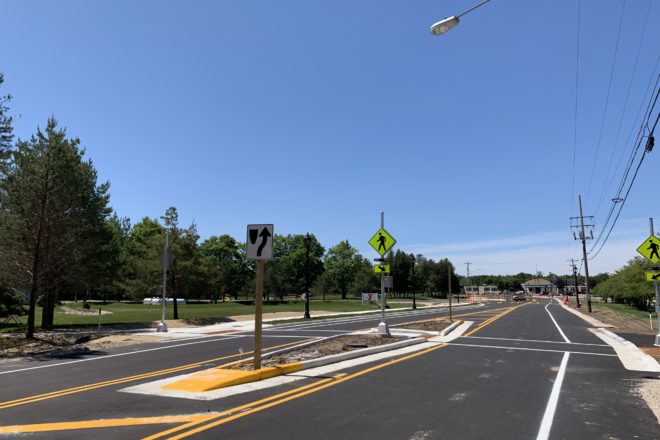 The Town of Gibraltar embarked on an expansive effort to improve pedestrian safety and connections as part of its 2020 Highway 42 reconstruction. That included extending sidewalks to Gibraltar School and the YMCA and safe crosswalks to guide students at the busy intersection. Photo by Myles Dannhausen Jr.

The Town of Gibraltar has tabled discussion of how it will handle special assessments for the sidewalk and street-lighting improvements it completed last summer. The board decided Monday to continue the discussion when it hires a town administrator – a position that’s expected to be filled by June.

A special town meeting on Feb. 24 to discuss the assessment process drew a capacity crowd in person and on Zoom, with most people taking issue with the proposed methodology for the assessments and the lack of communication with affected property owners throughout the process.

The formula was developed by consultants Bob Kufrin, a former Sister Bay administrator; and Dennis Stiegenberger of Cedar Corporation. At the Feb. 24 meeting, town chair Steve Sohns suggested the town chip in as much as $400,000 to offset the costs to the downtown property owners, but he said assessments have always been the method the town has used to pay for improvements such as these.

“Property owners who have sidewalks on their property have always been responsible for the cost of sidewalk repair and replacement,” Sohns said. “Ephraim and Sister Bay did it differently, but Gibraltar is a township and not a village. Townships cover a village area and a vast countryside. We’re not the same as villages.”

Sohns said he does not believe the whole town benefits equally from sidewalks, but he also noted that the town gets substantial revenue from room tax generated from downtown businesses.

“The room-tax revenue for the last 12 years has helped us pay for anything and everything, including roads,” Sohns said.

“From Sturgeon Bay on up, I really look at us as a tourism-based economy,” Luettgen said. “A lot of us benefit from what happens downtown, but I personally would like to see this addressed throughout the entire township.”

Many people who spoke during the public-comment period agreed. If spread across the entire township, it would cost property owners about $20 per $100,000 of assessed value per year for 20 years.

Sohns and fellow supervisor Bill Johnson emphasized that the town has discussed the assessments during many open meetings dating back to 2017, so property owners should not be taken by surprise.

“This is not our first kick at the can here,” Sohns said. “This is something we have spent a lot of time and meetings talking about and discussing.”

“There’s a really valid argument to be made that very few people show up regularly,” Schmitz said, “but town meetings are historically a nightmare that last late into the night. There’s certainly some room to make town meetings more attendable.”

Eric Apfelbach said it’s past time for the town to fix its communication problems.

“It’s not the first time people have been surprised in this town,” he said. “You have to look at those symptoms and say, ‘We have an issue here.’ People shouldn’t be this surprised. You can cull through minutes and suss it out, but the repetitive surprise by taxpayers of these issues needs to be addressed.”

Rachel Stollenwork, owner of Edge of Park Rentals, expressed concern about the board’s consistency. Property owners in the Founders’ Square area of Fish Creek are not part of this assessment, Sohns said, because “their day will come” when the town does phase two of the project in that area. Stollenwork urged the board to come up with a policy to assure property owners that a new board won’t spread that cost to everyone if this one is done by special assessment.

“I don’t feel reassured that if there’s a new project on the west side of town that I’m not going to be paying for that,” she said.