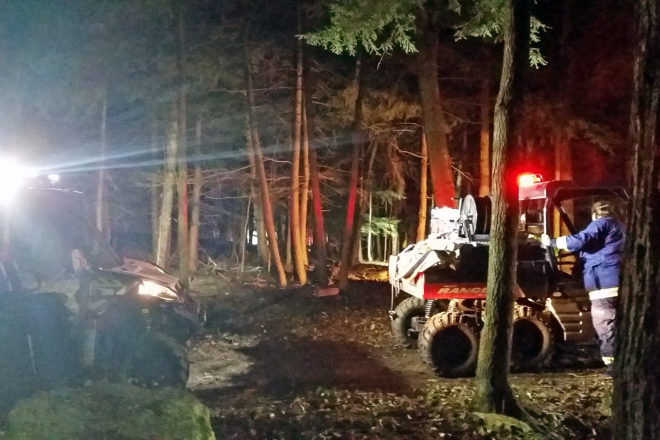 Firefighters and other emergency personnel respond to a plane crash that killed two in Peninsula State Park on Sept. 18. Photo by Ryan Sherman.

Olivia Dahl, a 16-year-old Gibraltar High School student and Sister Bay resident, and Ralph L. Keller of Sister Bay and LaGrange Park, Ill., have been identified as the victims in the airplane crash at Peninsula State Park Sunday night.

“Miss Dahl was a flying enthusiast and was taking lessons in Green Bay to get her pilots license. Mr. Keller was a volunteer pilot who transported Miss Dahl to her lesson in Green Bay,” said a statement from the Door County Sheriff’s Office.

What caused the Cessna 182 to crash is not yet known. The Federal Aviation Administration and the National Transportation Safety Board are now investigating.

A Gibraltar man had a hunch where a small plane had crashed on Sunday night, and was able to find the crashed plane and alert authorities to its location.

Ryan Sherman and his family had just returned from a week’s vacation and were preparing for the coming school day for their sons when two Door County Sheriff deputies blasted pass their home on County A.

“Seeing two of them is pretty unusual,” Sherman said. “So we put the scanner on and heard it was a plane crash.”

The Door County Sheriff’s Office was notified of a possible plane crash in the Ephraim area at 8:38 pm Sunday. The caller had witnessed a small airplane flying over Peninsula State Park near the Ephraim-Gibraltar Airport when the plane disappeared from view and the sound of a crash was heard. It was unknown if the plane had crashed on land or in the water. A search on land and water began.

When Sherman heard chatter that a noise was heard between Eagle Tower in Peninsula State Park and the airport, he had a feeling that he knew where the plane had crashed and wanted to head out on the park bike trails to help with the search, but his wife, Angela, suggested he stay out of the way of the professional search.

But he told her he “just had a feeling about it” and wanted to help the search. First he went on trails behind his house, which is near the airport. When he saw nothing there, he headed to the park trails off Highland Road.

“I was riding along and a hundred yards after the maintenance building, I saw a fire off to the side,” he said. “Initially I thought it was a campfire but thought it was really weird to have a campfire there. Then I smelled it and knew it wasn’t a campfire.”

Hesitant to get too close to the crash scene, Sherman said it was hard to tell what had happened.

“It was already pretty burnt out and not much left,” he said. “I couldn’t tell what was what. There was one piece of wing. Trees shaved down and knocked down.”

Sherman began yelling to see if anyone was around, and then called the non-emergency number for the sheriff’s department, but when he ran into automated responses, he dialed 911.

“I got in touch with a dispatcher, she patched me in and relayed what I was saying,” he said. “She had me go back to the trail. I put a marker down so I knew where it was. Then I ran back to the maintenance building and they had me show them where it was. If they were searching from the road, they wouldn’t have seen it, and it was even kind of hard to see from the trail.”

Sherman said the response time of the firefighters and other involved in the operation was impressive.

“I would say within a few minutes of calling 911, everyone was there. It was a strong response,” he said.