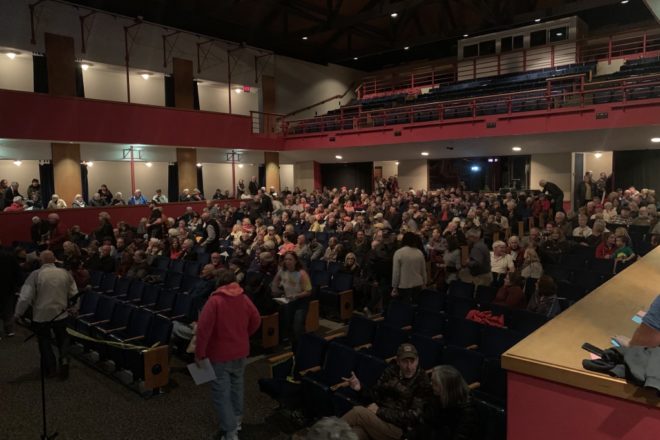 An estimated 400 people turned out for the Town of Gibraltar’s vote on purchasing the Redmann property in Fish Creek Oct. 16. Photo by Myles Dannhausen Jr.

Electors emphatically rejected a plan to spend $2.15 million on 195 acres of bluff, wetland and open space in the Town of Gibraltar during a tense meeting at the Door Community Auditorium Wednesday night, Oct. 16.

The final tally was 180 votes against purchasing the property, and 51 in favor. An estimated 400 people attended the meeting, though many of them were not residents and could not vote.

The land includes roughly 100 acres adjacent to the Settlement Courtyard Inn on Highway 42 and almost 100 acres connected to that below the bluff behind the Fish Creek Park.

In April, the town secured an option to purchase the property for $2.15 million, or $20 for every $100,000 of home value per year on local tax bills. But that purchase must be approved by voters during a meeting of town electors. The estimated fair market value of the property, which has been on the market for about 10 years, is $1.89 million.

The gathering began in confusion. As Town Chair Dick Skare attempted to get the meeting underway, he was interrupted by a demand that the crowd recite the Pledge of Allegiance. That was followed by requests to pause proceedings because at least 100 residents were still in line to get into the meeting.

Entry was delayed because voters arriving at the posted 6 pm meeting time were unaware that they needed to register to vote at the meeting, and there was a long line to do so. Skare delayed the meeting for 45 minutes to allow the crowd to filter in before proceedings continued.

The first presentation came from Ken Jaworski, a senior consultant with the engineering and planning firm Cedar Corporation, hired to help the town plan for developing the parcel. Russ Haack – an opponent of the project who poked holes in the town’s estimated costs for an affordable-housing development on the site – followed Jaworski. Then Donn Dresselhuys gave a vague outline of what an affordable-housing development might cost and what it might bring to the town in income and community value.

Hacak said affordable housing is a good goal, but he encouraged the town to pursue more suitable sites and developments.

Haack explained that a housing development would include much greater expenses than building the homes and extending sewer across Fish Creek and up the bluff. That alone would cost an estimated $800,000, but would not be hooked up to any homes until the town figures out who pays for those hookups. There would also be extensive costs to build roads, run electricity, and provide lighting and sidewalks. Though the town’s pitch said developers might foot some of those bills, Haack doubted they would do that to build homes at a low profit margin.

In urging electors to vote no, Haack said the board failed to present voters with a clear vision or a financially viable option for affordable housing, or to show that there is a good reason to overpay for the property. When he finished, the response from the crowd made it clear that most of them agreed.

Jim Schuessler, executive director of the Door County Economic Development Corporation, spoke of the value of securing the property and said voters should not assume that developers aren’t interested in a property with 580 buildable lots.

“Divide that price over 580 potential building units, that’s $6,000 a unit,” he said. “That’s a very good deal for a developer. This community needs to take a hard look at having control over what does happen here.”

Looking out at a crowd of mostly older residents, Schuessler encouraged them to think about the members of the next generation who want to make a life in the community.

“This stuff is hard, but that doesn’t mean it’s impossible,” he said. “This is an opportunity to create an option for your children and grandchildren to move here and live here.”

One speaker after another reiterated concerns about affordable housing, some painting a picture of a dilapidated ghetto.

Doug Lindemann, owner of Fleetwood Custom Homes in Fish Creek, touted his experience as a builder and noted that a portion of his career has been spent working for a nonprofit developing low-income housing. He cautioned voters against the pitfalls of building for those in the lower-income sector, warning of trashed apartments, mortgage defaults, and the difficult task of evicting people.

“These folks cannot afford houses here,” he said. “They’re looking for a handout.”

Others, such as Jim Schultz, expressed concerns about running a sewer line under Fish Creek, through ecologically sensitive land, and up the escarpment.

But many also said they might think differently if they had confidence in the town board. Many permanent and seasonal residents have grown increasingly frustrated by the board’s handling of the last four major projects it has undertaken – the beach expansion and bathroom, the long-term parking lot, highway reconstruction plans and the decision not to bury power lines but to instead erect towering black poles through the town.

“I don’t think the town has the personnel to manage a large and complex project like this,” said one speaker to great applause.

Skare was the only board member who spoke; the rest sat silently on stage throughout the meeting. Skare touted the benefits of the property that have nothing to do with affordable housing – hiking and biking trails, preserving the watershed and escarpment, and enhancing recreation in the town.

Angela Sherman said she moved to Gibraltar a decade ago with her husband and purchased a “handyman special” – the best they could afford – where they are raising three children.

“When we’re talking about attainable housing, we’re talking about housing for people like me,” said Sherman, a member of the Gibraltar School Board. In Door County’s housing market, she said the handyman specials are growing harder and harder to find for her friends who are looking to buy today.

And when they can find such homes coming on the market, Sherman said, they’re snapped up by investors who want them for vacation rentals.

“They not only lose a house to buy, but a house to rent,” she said. “This is for people like me and my friends. I’d like us to be a community that leaves a legacy like that.”

Former board member Brian Hackbarth said he could support a realistic project on the site with realistic numbers. He said he has seen the same exodus of friends that Sherman has observed.

“All of my peers are leaving, and unless we change that, this community is going to have a problem in the future,” he said.

The meeting continued for more than three hours before the vote was finally called.

As the crowd dispersed after voting, further confusion ensued as board members left the stage without an audible motion to adjourn. Audience members questioned whether a motion to adjourn had been made and accepted. Skare assured them that it had, but that the motion was made out of reach of the microphone at the podium.

At 9:44 pm, nearly five hours after doors opened for people to register to vote, the final attendees filtered out of the auditorium and past the orange highway construction signs in a town that remains very much a work in progress.