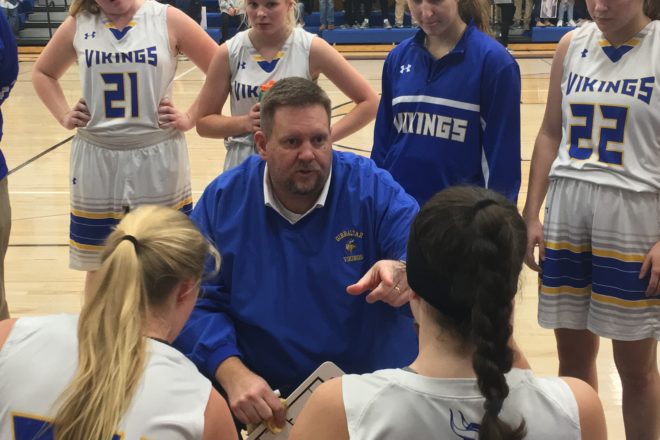 Kropuenske’s players appreciate his gametime intensity even more thanks to his commitment to his players off the court. Photo by Lauren Bremer.

On Nov. 15, Josh Kropuenske tallied his 100th win as the Gibraltar girls basketball coach, and this Friday his team begins the postseason with a No. 1 seed in regional play.

One doesn’t have to look back too far in Gibraltar’s yearbooks to see that in the ’80s and ’90s, finishing the season with a few wins was the norm, but Coach K, as everyone in this community refers to him, doesn’t take much credit for the turnaround or surpassing 100 victories.

“To me that award is all about the players we’ve coached,” he said. “We’ve had a remarkable run of some really tremendous basketball players. That, coupled with being able to work with some really great coaches for the last eight-plus years, makes all the difference in the world. I’m just the guy who has ‘head coach’ by my title, but it takes everybody – all of them.”

Such is Coach K. The selfless, even-keeled, rock-steady member of the Northern Door community has been shaping the lives of our youngsters one basketball season at a time. Now in his ninth season as the girls’ head coach, he is approaching 20 combined years of coaching basketball at Gibraltar schools at nearly every level, from fourth grade to varsity. His athletes have bought into a program that rewards hard work, dedication, a willingness to learn from mistakes and above all else, being a good teammate.

Along with his wife, Alicia, and sons Tyler and Ryan, Kropuenske owns and operates Baileys Grove Campground. Spring to autumn, the family is busy running the business, but for the last 20 winters, basketball comes first.

Kropuenske’s impact is visible in many ways, especially in former players who spent many hours in Coach K’s gym. Take Makenna Ash, class of 2015, who went on to play at St. Olaf College.

“Knowing that Coach K valued us as people, and not just as players, added a layer of trust and respect that I think makes him an incredible coach, and which I believe is one of the reasons the Gibraltar girls basketball program has been having so much success in the years he has been coaching,” she said. “I loved playing for Coach K because he held us all accountable, but he would always be the first to forgive you for screwing up.”

That kind of connection with his players is part of what keeps 20 years of Gibraltar graduates, men and women, returning to watch games, showing up at the campground for a visit and volunteering at practice. On Dec. 20, senior Payton Pluff scored her 1,000th point. In the stands that night was a veritable Who’s Who of Gibraltar basketball alumni. Kropuenske’s players from as far back as 1999 were in attendance, returning to support the team and the coach who had supported them.

Kropuenske’s younger son, Ryan, co-captain of the Gibraltar boys varsity squad, cites this as one of the things his dad is most proud of.

“I know that’s really important for him because he really enjoys when past players come back and share their experiences and share their knowledge of what it takes to be a winning program, and my dad has always valued their input when they come back. It keeps the culture going,” Ryan said.

The culture that Ryan refers to is central to the why of Kropuenske’s coaching. Many people who coach name passion for the game or the thrill of competition as reasons to do it. For Coach K, the culture of the program is something that is far more important than a win-loss record.

“[Playing the game] can have a huge impact on them,” Coach K said. “I really think it’s important for kids to be held accountable. It teaches so many life lessons. Even just the issue of ‘starting’ or ‘not starting.’ How you cope with that as a player will impact how you handle disappointment in your life and situations later on. I think it’s invaluable.”

In 2010, when Coach K took over as head coach for the girls’ program, he asked his senior captains, “What do you want from your coach?”

We just want a coach who cares, they told him.

“If that’s all they wanted, I thought, this will be a piece of cake,” Coach K recalled. “I can care. We can care about you as individuals and as young women. I think that’s the thing I’m most proud of. One hundred wins are nice, but this is better,” Coach K recalled.

That attitude continues when it comes to his family, too. Out on the court is where Josh and Alicia fell in love, and they’ve continued to share that love of the game with their boys. Ryan and Tyler, now a sophomore and a football player at the University of Minnesota-Crookston, grew up in the gym, both watching early practices while wearing footie pajamas and seated in car seats on the sidelines.

“There’s not a better place to grow up than in a gym,” said Coach K. “For my boys, to be in the gym, to be around all the guys – all their role models – and they get to see their dad out on the court, and they get to pick up a ball and play, and no one tells you to be quiet.”

And for the whole ride, Alicia has been there as his best sounding board and biggest cheerleader. A two-time Utah state-championship runner-up, she is a formidable basketball player and former coach in her own right.

Ash recalls a fond memory of playing for Coach K at Algoma – a team that was winning state titles in Division 4 at the time. Nearing halftime, the overmatched Gibraltar squad was keeping the game tight, so Algoma coach Mark Zastrow – frustrated with his team’s play – called a timeout.

“We went over to our bench, and instead of drawing up a play or going over defense, Coach K had the biggest smile on his face, and he just said, ‘Let’s just sit here and listen to him yell’,” Ash recalled. “We didn’t end up winning the game, but Coach K understood that giving Algoma a run for its money was a huge success for us, no matter how the game turned out, and he helped us celebrate it in the moment.”

Lessons like those are what Alicia sees as the heart of the program and their family.

“It’s about becoming a good human being,” she said. “It’s about giving it your all, trying your best, being a good teammate and caring about the kids.”

Josh Kropuenske’s impact of caring will far outlast the scoreboard because his legacy is walking among us.