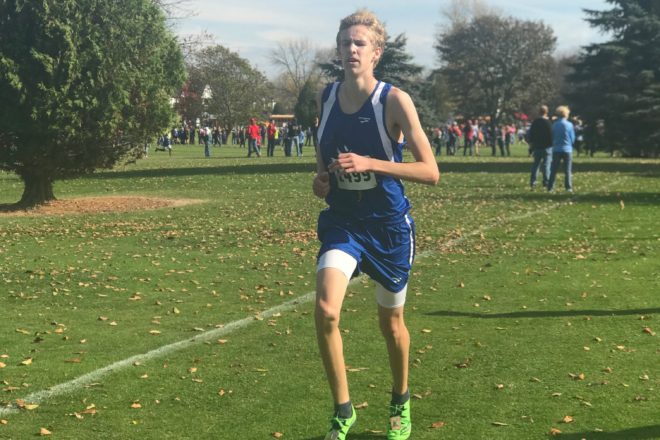 Gibraltar’s Evan Henry stands tall against his competitors in more ways than one. The 6’5” senior cross-country runner has turned in an impressive season thus far, amassing four first-place finishes along with two second-place finishes in seven meets this year.

Henry is looking to finish his prep career on a high note with hopes of repeating as a Division III state qualifier, where he placed 18th at the conclusion of his junior season.

“I hope to break 16:30,” Henry said. “It comes down to how good of a course it is. State is the last meet of my career, so I will be pushing myself beyond what I’ve ever done before.”

That goal comes on the heels of achieving his personal record of 16:34 at the Nightfall Classic in Wisconsin Dells on Sept. 28. He finished one-tenth of a second behind the winner.

Through the years, Henry has been able to shave minutes off of his running times, a credit to his training regimen.

“Usually I do summer running for about five or six days a week,” he said. “During the season, I’ll have a hard workout once or twice a week. I have an ‘easy day’ right before the meet and a recovery run after. I take a few longer runs on Saturdays, about 6-8 miles.”

Some of the more challenging workouts come in the first weeks of the cross-country season. Runners complete repeats, where individuals run 1,000 meters at a relatively fast pace, take a short break, and do it again. The hill workout, where runners run up and down a large hill for 20 minutes as many times as they can, is what Henry says is “the most brutal workout for everyone.”

Perhaps equally important to the training itself is how Henry handles the mental aspects of running the 5k race, largely dependent on appropriate pacing.

“During the first mile, many runners will go out real fast,” he said. “I sit near the top, but not right in front…around 20th place. In the second mile, I start passing people to move up further and keep a good even pace while working my way up in the crowd.”

In the final third, he takes it to another gear.

“Once I hit the last mile, I just try to keep going as hard as I can and give all that I’ve got,” he said.

His running career began in the seventh grade, when he found success in running the mile in gym class, but he’s focused on more than just running. He is a three-sport athlete who also plays basketball and runs for the track team. He is fond of the theater arts and credits his sister for introducing him to them. Henry participates in both One Act and the spring musical.

When he is not on the course, court, track or stage, Henry is hitting the books. He holds a 4.0 GPA (4.2 when weighted) with a course load that includes six advanced placement courses. He estimates having 10 A.P. classes under his belt when he graduates.

His success in the classroom earned him the WCCCA Academic All-State Award in 2017. He is a member of the National Honor Society and is an A.P. Scholar with Distinction, and aims to earn the rank of Eagle Scout in the coming months.

Gibraltar head cross country coach Joy Manweiler Bastian is impressed with Henry’s ability to manage his time between his commitment to running and his other priorities. She said, “Evan’s natural ability for running, along with his patience and trust in his training, have allowed him to excel to the high level at which he is currently competing.”

Bastian said Henry’s work ethic has turned him into one of the top runners in school history. “It has been a pleasure and an honor to see him progress from a 5k time his freshman year of 18:05 to his current best time of 16:34, the fifth best 5k time in Gibraltar school history,” she said.

Despite his deep commitment to his prep running career, Henry said his college focus is on academics first.

“I am looking at colleges in Illinois, Minnesota and Wisconsin,” he said. “I am looking for schools with a strong engineering program. If they have a team to run for, I may try it. Otherwise, I plan to run for a club team and focus on academics.”

Henry will compete in the conference meet on his home course in Fish Creek Oct. 11. Pending his placing at the sectional meet at Manitowoc Lutheran on Oct. 20, Henry has a chance to make a repeat trip to the state cross-country meet to be held at The Ridges in Wisconsin Rapids on Oct. 27.