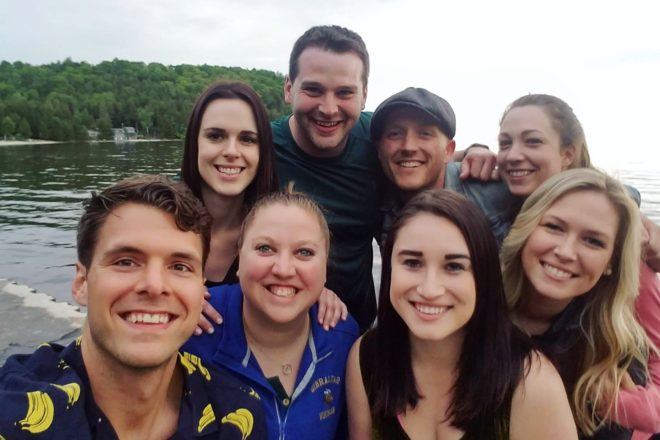 Growing up, both Katie (Sawyer) Helscher and Abby (Polomis) Duebler dreamed of being on the Disney channel. The movies, the music and the glamorous lifestyle of Lizzie McGuire mesmerized the two – like many others. And like others, those dreams faded as they grew up, never to be realized. Or so they thought.

While scrolling through social media one day, Duebler came upon a post by Kristen Bell – a famous actress most recently known for her voice talents as Anna in the hit Disney movie, Frozen, and executive producer for the new Disney+ series, Encore!. The post was advertising auditions for the new series. The premise of the show is to gather together the cast members of a high school musical to recreate their performance years after the original show.

“I was really interested and wrote to Katie, ‘Let’s do this,’” said Duebler.

Deciding to apply with High School Musical was an easy decision for the two. While they had done a lot of fun productions during high school, their favorite was High School Musical. Duebler was on board with applying, but, despite being interested, Helscher took a while to fill out the application.

“I was so slammed at work, so I said I’d think about it. I pulled it up on my desktop and left it there. I looked at it for a week and thought about it and said, ‘I never get picked for this kind of stuff,” said Helscher.

During a slow day at work, she decided to open it up and fill it out. But the simple form and basic questions left the advertising exec wondering.

“My marketing brain kicked in. How do I make our application stand out? How can we make them interested in us from the get-go if they are gonna get hundreds of applications?” said Helscher.

Luckily Helscher filled out the application and sent it in. Despite never getting picked before, she was about to get picked for the experience of a lifetime.

Helscher submitted the form in October 2018 and didn’t hear back for months. In January 2019 she received a phone call, and – thinking it was spam – let it go to voicemail. Aftering listening to the voicemail she realized she missed a very important call from a LA casting agency. They were interested in talking to her about her application for Encore!. That’s when the months-long process began.

After passing the round of phone conversations, individual Skype interviews were set up. These interviews were later used as a sort of interview reel that Disney would watch to select the final schools. In April 2019 Helscher and Duebler were notified that Gibraltar’s High School Musical would be one of the 12 episodes of Encore!.

Helscher and Duebler knew there would have been many applications (especially those applying with High School Musical), but they believed it was the story of their cast, and Allison Pfeifer, that brought their application to the top of the pile.

The Gibraltar players first performed High School Musical in 2007 under the direction of Lizz Thomas. The show was popular among the students trying out, and even some of the boys basketball players joined in on the fun, playing members of the fictional Wildcats basketball team. Pfeifer received the lead female role in the show, Gabriela. Even though she had performed in Thomas’s children’s theater, this was her first big role.

Rehearsals went on as normal and the students were preparing for performance nights. Like many other students at Gibraltar, theater wasn’t Pfeifer’s only passion. She played on the school’s softball team along with castmates Helscher, Duebler and Kayla (Anschutz) Schleicher. A week before the show the girls had a softball game prior to play practice. It was during this game that tragedy struck.

Helscher remembers the game vividly: She was at shortstop, Pfeifer was pitching, Schleicher was catching and Deubler was on third. It was the second pitch of the game and the hitter got ahead of the ball, sending a line drive directly back to Pfeifer.

“The ball got hit, and all we could see – because we were behind her – was her glove go up and she just falls to the ground,” said Helscher.

Once it was over, Helscher came up to Pfeifer who was covering her eye, not saying anything. After asking if she was OK, all Pfeifer could do was nod.

Helscher and Duebler did have a fleeting moment wondering whether Pfeifer would make it to play rehearsal later that night, but it wasn’t until they went to rehearsal and told Lizz what happened that they realized the seriousness of her injuries.

The two later found out that Pfeifer had a blowout fracture of the orbital bone, a fractured nose, and residual double vision for about three months due to nerve damage.

Some of the timing has become fuzzy since then, but Helscher remembers having a conversation with Lizz and her son, Devin Thomas, who was playing the lead male role – Troy – opposite Pfeifer. Once they realized Pfeifer would not be able to perform, they had to decide how to proceed. Initially, Lizz considered moving Helscher from her cast role – Sharpay – to the lead, but both agreed it would be more work to train two people on two new roles, versus one person learning a new part. That’s where Schleicher stepped in.

A big fan of High School Musical, the original Disney movie, Schleicher was an obvious choice. She already knew the dances and music, and just needed to get down lines and blocking. Both Helscher and Duebler  commended her on stepping up to the plate, saying she took on the responsibility in stride.

Pfeifer’s focus turned to healing, and High School Musical was performed without her. Participating in Encore! became a chance for Pfeifer to play the role she never got to.

The time had come to finally gather together and start recording. The returning cast members had kept in touch since leaving Gibraltar, so, for Helscher and Duebler, the exciting part about the reunion was getting a solid week of uninterrupted time together. It was a chance to get to know their friends as adults.

“It was getting to know each other, and getting to pretend again, and put ourselves back in high school and live that youthful life,” said Duebler.

Filming time was rigourous for the team, starting at 8:30 am most days and ending between 6-7 pm. On some nights, the cast would stay until 10-11 pm running lines and working on choreography together. While they knew the time commitment they were signing up for, the cast had to leave their jobs and family behind for a week. Helscher and Duebler  expressed how supportive their families were, knowing what a great opportunity it was. It was a week where they could leave all responsibilities behind and fully immerse themselves in the experience.

Since filming wrapped, it has been a waiting game until their episode airs. Episodes are released every Friday, and with every new episode, their excitement increases until it’s their turn to see their hard work come together.

No matter what anyone says or the reactions to the episode, Helscher and Duebler know their experience is what truly matters.

“Since we have been little girls, we have always wanted to be on the Disney channel. [It’s] definitely a dream of mine that I get to see come true in some capacity,” said Duebler.

The Gibraltar Encore! episode will air on Jan. 10, 2020 on Disney+. Stay tuned for a special Pulse Podcast episode where we talk more with Helscher and Duebler, and hear some exclusive behind-the-scenes experiences with the cast.