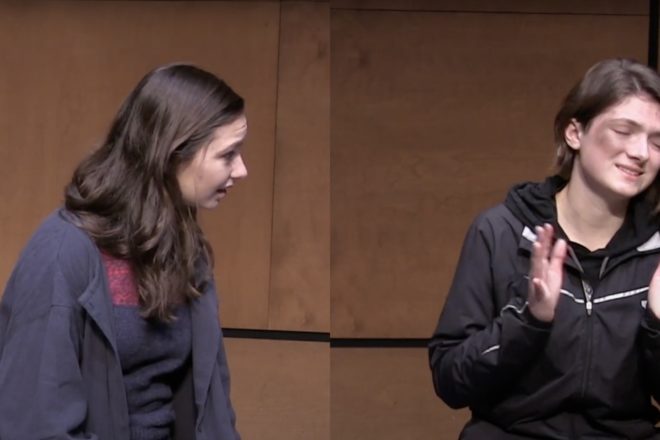 Imagine being cast in a play in which you would never appear on stage or even in the same room with another actor. Imagine being coached by a director with whom you never spoke in person, instead filming yourself with your phone as you performed all alone – with that footage later combined with your castmates’ video clips to create the show.

Gibraltar High School students did that this winter – writing scripts based on an idea that director Lizz Thomas suggested to them – to create Gibraltar’s one-act play, Loose Parts.

During the past 17 years in statewide competition, Gibraltar High School students have brought home 13 Outstanding Acting Awards, seven Outstanding Director Awards, 11 Ensemble Awards and six Critics’ Choice Awards. During the students’ most recent trip to state competition in December – held virtually this year – the cast of Loose Parts was once again recognized for its excellence in the art of theater.

Thomas said that Gibraltar is part of a state association that approaches dramatics as a teaching and learning experience.

“In the past,” she said, “I was a judge for another organization that pitted schools and individuals against one another in vying for ratings. It was a dog-eat-dog situation, and I saw kids – who had obviously worked so hard and done their very best – go home feeling like losers because they didn’t get the top rating. I’m sure many of them never had the courage to try again.

“That’s not what we want for Gibraltar. If our students do well, they win awards. Other schools that do equally well win awards, too. That’s the way it should be.”

With the pandemic, Gibraltar was not in session during most of the first semester, when preparations for the one-act play would normally begin. After Thomas began talking about the one-act with interested students online in September, she fell victim to COVID-19 and was out of commission for a month.

The idea for a virtual one-act came while Thomas was participating in an online seminar about techniques for teaching improvisational acting – one of them being taking a random object and discovering how she related to it. From that technique grew the idea of a “junk drawer” that accumulated things that have no apparent purpose or relationship to one another, and how that can be true of different experiences during a pandemic.

Gibraltar student Audrey Viste’s introduction to the play grew out of that premise.

“We’ve learned so much this year,” Viste said to open the show. “Things don’t always turn out the way you’ve planned or the way you thought things should go. Things that go wrong don’t always get fixed or put back together the way they were before. Like your kitchen junk drawer. The place where we throw things we don’t quite know what to do with – a bunch of loose parts that don’t seem to have a place or a purpose. Then, as you pick out each of those random objects, those loose parts, stories begin to unfold.”

Even the cast didn’t work out as originally planned. Actors dropping out during the months of preparation – something that rarely happens with on-stage productions – was a problem. Twelve students began work on the project; six continued to the end.

Students developed six vignettes that were typical of the global pandemic. In the first, Airport, Lexie Henkel played a girl who’s frustrated to discover that she won’t be flying to Europe to meet her boyfriend because all flights have been canceled. She thinks the whole virus situation – including the requirement to wear a mask – is overblown. Her friend, Makenize Kohler, sympathizes but tries to explain that the situation is serious and has more potential consequences than a missed flight.

The second scene, Missed Connections, depicted a teenager, played by Carlos Torres, trying to teach his grandmother, played by Lexie Henkel, to use Zoom. “Grandpa” became “Grandma” when the original actor stepped out and Henkel stepped in on short notice.

Scene four, BLM, was the judges’ unanimous pick for the Critics’ Choice Award. Lily Sweeney wrote the script in one night. Viste, playing a girl who was injured by police action during a Black Lives Matter protest, goes to the hospital and is surprised to find that her mother, played by Henkel, is there with Nana Jo, who was just brought in as a COVID-19 patient.

“The judges said the girl’s attempt to explain to her mother how important it is to stand up for what you believe was both poignant and powerful,” Thomas said. “They commented that young people really have a handle on what needs to happen, and people need to hear it.”

Viste and Henkel earned Outstanding Actor Awards for this performance.

The show ends with the line, “If we all join together, we can mend a crack in the sky.” Viste sang “Lean on Me” as the credits rolled.

“I am so proud of this little group,” Lizz Thomas said. “In a year with challenges that sometimes seemed insurmountable, they stepped up and did a beautiful job.”