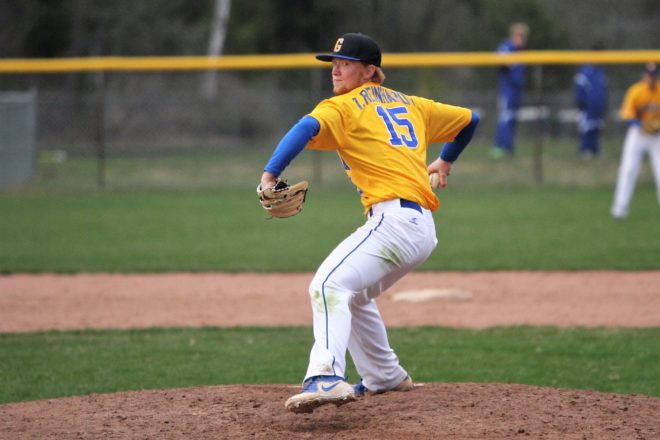 Reinhardt, a senior, was second in the conference with a .467 batting average. Overall Reinhardt hit .500 with 10 doubles and 18 RBIs .

“I feel very honored to be named player of the year,” Reinhardt said. “I have to say I was a little surprised as there are a lot of great players in the Packerland Conference that have made me want to step up my game. I have also had some really great coaches and assistants through the years that have helped me fine tune my game.”

On the mound Reinhardt posted a 4-3 record, including a perfect game against Green Bay N.E.W Lutheran in the regional playoffs. Reinhardt struck out 56 batters and posted a sub 3.00 ERA.

“Trevor throws hard, hits his spots and is very good at changing speeds,” Southern Door infielder/pitcher Derik LeCaptain said. “For me it’s very tough against him because we have played each other since we were eight. He knows the pitches I don’t like to see.”

Seven other local athletes were named first team all conference, led by Sevastopol’s Ethan Kroll, who was a unanimous choice as an outfielder. Kroll was third in the conference with a .435 batting average.

Sturgeon Bay teammates Trent Ehlers and Ryan Jacobson joined Kroll as outfield selections. Teammates Tyler Kroll and LeCaptain of Southern Door were named as infielders and Andras Szakala was a top choice at catcher. Sturgeon Bay’s Jake Schneider was named as a pitcher.

“I want to give my catcher Andras Szakala some credit for my pitching,” Reinhardt said. “He calls a great game behind the plate.”