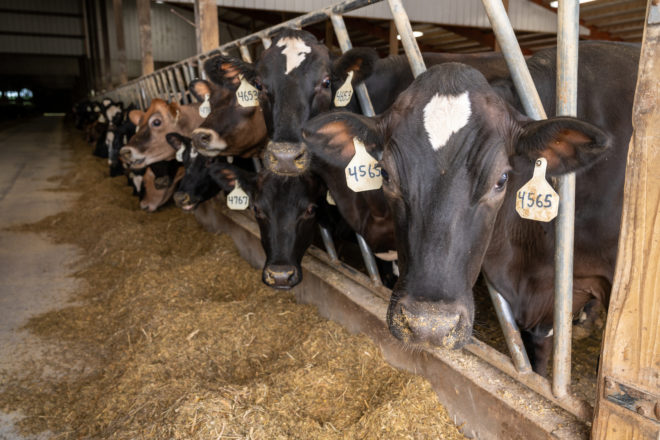 Dairy cows feeding at Gilbert Farms in the Town of Sevastopol. Photo by Brett Kosmider.

Editor’s Note: This is the last of a three-part series about Door County dairy farms.

Most dairy farmers are out with the cows by 4 am. Tim Gilbert usually sleeps until 10 – but then again, he doesn’t typically get to bed until 6 am. On the day of our 10:30 am interview, he’d had fewer than three hours’ sleep. Marge, his wife of 37 years, has dinner ready at 6 or 6:30; then Tim goes out to check on the new calves. He tries to check on them again about 10 pm, then sits in his chair for a couple of hours before a final check around 1 am. On a night without problems, he’s in bed five hours later.

Marge, on the other hand, is up by 5 am, makes her daily trip to the Sturgeon Bay YMCA and doesn’t usually see Tim and their sons, Ryan and Wade, until breakfast, when there’s a lull after milking. Soon after this interview began, Marge called, “Breakfast is in the oven!” as one of the young men headed to the house.

Tim and Marge work in tandem. Tim oversees the day-to-day farm operation, and Marge does the bookkeeping and keeps detailed records on each cow.

“I fell in love with Tim because he was a rebel,” Marge said. “He’s very progressive, very intelligent, not afraid to tackle anything and never negative about farming. He’s already ready to jump into something. All he does is work.”

Tim does like to work. He said his worst fear is having to retire. Three months ago, he fell from a 10-foot bunker onto concrete.

“It didn’t necessarily put a cramp in my lifestyle,” he said. “It hurt more, but I kept working. The people who work for us are honest and reliable. They survive on a wage, and we have to figure out a way to keep going so everyone can get by and we can keep the cows healthy.”

Getting by and keeping the cows healthy have been his objectives since 1978, when Tim and his brother Ron – two of the 10 siblings who grew up there – founded Gilbert Farm. The brothers remained partners in the operation until three years ago, when Tim and Marge bought out Ron and his wife, Mary. Ron continues to feed the livestock every day.

The Gilbert farm is big by Door County standards. The Gilberts own about 1,000 acres, rent another 1,000 or so more, and milk roughly 500 cows. Because of the extremely shallow soil in the county and the danger of accumulated manure contaminating the groundwater, the Soil and Water Conservation Office requires that a herd this size be housed indoors in a free-stall barn – that is, where the animals are not restrained in their stalls and are free to move around.

By the government’s definition, the Gilberts’ farm is not considered a concentrated animal feeding operation (CAFO) – enterprises that have 1,000 or more animal units as determined by animal weight. Seven hundred milking cows would equal 1,000 animal units, making the Gilberts’ 500-cow operation smaller than the CAFO designation.

Still, there’s a lot of manure to deal with. The Gilberts spent $189,000 to build a manure-storage facility to eliminate possible runoff. And, with the ingenuity that enables farmers to keep going, they also found two efficient ways to turn manure into an asset.

Bedding for dairy cows – such as sawdust, straw and sand – have added costs and can be hard to come by. Manure, on the other hand, is never in short supply. On the Gilberts’ farm, it’s put through a separator that heats it for use as bedding. Using manure solids as bedding also permits better management of plant nutrients because the separator reduces the amount of nitrogen in the remaining liquids by about 6 percent.

Roughly 300 of the milk cows sleep on rubber mats with the recycled manure on top, and the remaining cows “make do” with water beds. Housing the herd indoors comes with certain advantages. The cows avoid winter’s extreme cold and summer’s heat and sun, which can cause sunburn. Huge fans in the barns create a six- to seven-mph “tunnel wind” that keeps the flies out and the temperature comfortable year-round. The indoor environment also allows the farmer to keep exact tabs on what each cow eats and drinks. One cow needs about 50 gallons of water a day to digest a daily food intake of about 110 pounds.

Thirteen employees, including Alberto Sanchez, who’s been with the Gilberts for 18 years, help them take care of the dairy herd. Three people handle the milking three times a day. The parallel parlor holds 44 cows at a time and takes eight minutes and 45 seconds to complete a rotation. The dairy ships about 13 million pounds of milk a year. The Gilberts say the quality of feed – how it’s planted, harvested and stored – is most important to the quality of the milk produced, and they raise almost everything their cows eat.

The Gilberts’ cows are a mixture of Holsteins and Jerseys, bred specifically to produce milk that makes great cheese – a bit lower in volume, but considerably higher in both protein and butterfat. About 20 years ago, it was the sterling reputation of their cows’ milk that drew the attention of BelGioioso, a company founded in Wisconsin in 1979 by a family of Italian cheese makers that sells 28 varieties of cheese to retailers and upscale restaurants.

Farmers on small dairy farms worry about lean years, and those on big ones do, too.

“Everything costs a lot,” Marge said, “and we have to figure out where to allot what we have to spend. No matter what your size, you have to figure out how to be competitive. Sometimes, we do just the minimum to get by. Last year, we finally got the roof on the house replaced, after living with leaks for a long time.”

Like most families that are part of a long farming tradition, the Gilberts would like to see their life’s work continue. Their daughter, Katie, is not apt to leave her job as a massage therapist in Breckenridge, Colorado, but both sons work full time on the farm. And the next generation – Grant, Lucy and Gracie – is in the wings.

Tim is a firm believer that, within 10 years, Wisconsin will again be the nation’s top dairy state.

“California doesn’t have the crop land to feed its huge dairies,” he said, “and both California and Texas are running out of water. We’ll be back ahead of California in milk production.”

Marge’s opinion? “California should stick to what it does best: making wine!”