Liberty Grove voters will decide if $2.35 million is the right price for public water access at a special town meeting Wednesday, Sept. 8.

That price tag would buy the town three shoreline parcels in Gills Rock offered for sale by Weborg Bros. Dock, Jeffrey and Elizabeth Weborg, and the Richard Johnson family. 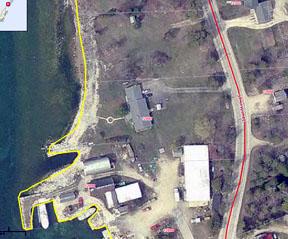 An aerial photo of the three parcels the town is considering buying in Gills Rock.

The parcels include 2.22 acres of land and 431.56 feet of shoreline frontage. The town does not have a plan for what it would do with the property once purchased, and the price does not include the cost of any improvements to the properties.

The town separated the purchase of property from any future development plans in May of 2009. At that point, discussions had grown contentious when a 98-slip marina and harbor of refuge was proposed for the spot.

At an informational session Aug. 17, many residents expressed frustration that the purchase price presented far exceeded the $1,483,100 million estimated fair market value of the parcels.

“This price was reached through a negotiation with the sellers,” said town Chairman John Lowry. “This is the best agreement we could come to.”

The town asked assessor Mike Walker and real estate agent Dan Mortier to provide property value estimates as well. Lowry said Walker’s estimate came in close to the estimated fair market value, with a value per shorefront foot of $2,900. Mortier’s analysis placed the value at $3,654 per shorefront foot, while the agreement reached with the sellers puts the average shorefront foot price at $5,445.

Town resident Susie Watson opposes the purchase. She questioned why the town board is even bothering to bring the proposal to a vote at what she called “such a high price.” Lowry’s answer was simple.

This is not the first time the town has considered buying the shoreline property. In the early 1990s a plan endorsed by then-Governor Tommy Thompson to buy the shoreline for a marina development was approved by the board. That project fizzled when residents balked at the idea of a condo development as part of the project, recalled Town Clerk Bud Kalms.

At the town’s April 14, 2009 annual meeting, Supervisor Robert Tidball made a motion that the town purchase 11 shorefront parcels, including the three mentioned above. That motion failed in a 47 – 26 vote at a lightly attended meeting. The town had not negotiated a purchase price for the properties and had reached no agreement with the property owners when the motion was made.

Determining who gets to vote Sept. 8 has been a difficult task for the town. Initially Lowry planned to make voting open to all property owners in the township, but that isn’t allowable under Wisconsin state statute.

Only U.S. citizens age 18 or older who have resided in Liberty Grove for 10 days immediately prior to the election will be able to vote. Residence is defined as the place where the person’s habitation is fixed, without intent to move, and to which, when absent, the person intends to return.

Upon entering the town hall, voters will be asked to sign in, print their name, residence, and date. If the voter’s residence is in Liberty Grove they will be handed ballots for the evening’s voting.

With ballot in hand, attendees could be settling in for a long evening.

“There’s a possibility of up to five different votes, since there are five ways the land could be purchased,” Lowry said. In other words, it’s not an all-or-nothing proposal. After each motion, there will be time for discussion before a vote is taken.

Watson and others argued that the board should have allowed for more discussion and expressing of opinions at its Aug. 17 and 31 informational sessions, but Lowry said that could have gotten out of hand. After 31 board meetings since May of 2009, he said he wanted to keep the meetings focused on the financial aspects of the purchase.

“These were informational sessions only. I didn’t want to have neighbors yelling at each other or spreading rumors,” he said.

Lande: 2.22 acres for all three parcels

Check ppulse.com for results of the vote late Sept. 8 (or early Sept. 9).