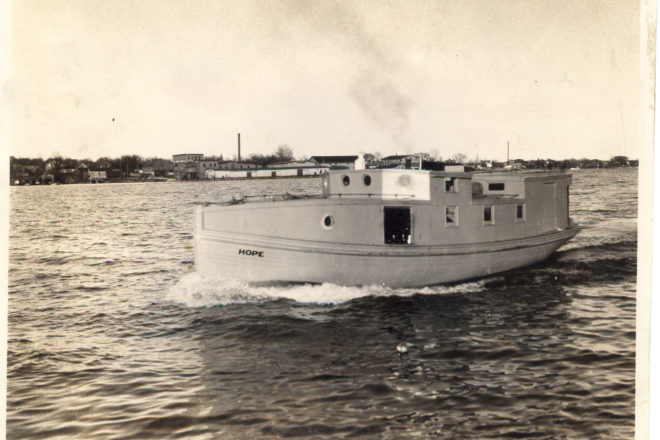 The Door County Maritime Museum will highlight some of its new and existing exhibits at its Gills Rock Maritime Museum on Sept. 4, noon – 4 pm. This special event will feature maritime guests and experts that will help bring the exhibits to life.

The event will be used to help introduce the museum’s newly restored 1917 Kahlenberg engine as well as the refurbished Plum Island Fresnel lens. Trygvie Jensen, author of Through Waves and Gales Come Fisherman Tales and Wooden Boats and Iron Men, will also be on board the commercial fishing tug Hope answering questions about commercial fishing and its tugs.

Kurt Krueger restored the Kahlenberg and will explain the workings of this remarkable engine. “Hear what it took to restore this workhorse of commercial fishing and the story behind this particular engine,” said Adam Gronke, museum curator. “Every single nut and bolt was taken off, cleaned, repaired and restored to it’s original.”

The engine sat outside for more than 25 years. It is originally off the fishing tug King in Ellison Bay, and had been in storage in Sturgeon Bay following Krueger’s ambitious restoration project. It was moved to Gills Rock on July 13. It is now one of four Kahlenbergs in the Gills Rock Maritime Museum.

This special event is free to all Door County Maritime Museum and Friends of Plum and Pilot Island members. General admission is $6 for adults and $3 for children. For more information visit dcmm.org.