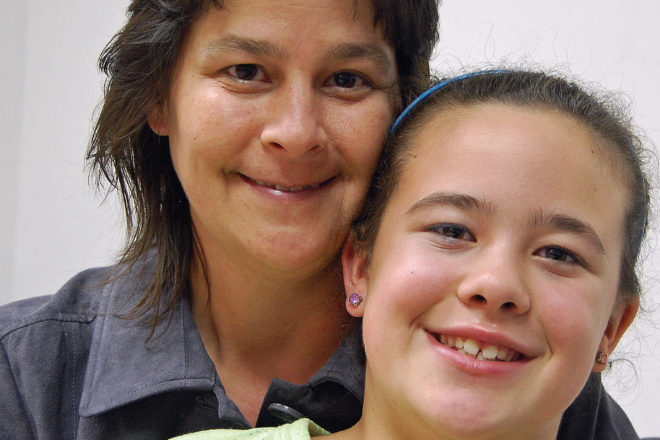 The Door County Community Foundation (DCCF) administers a grant program called Youth as Resources, which is funded by the Door County Service Club Coalition. It allows young people to apply for grants up to $500 to “use their skills, talents and abilities to serve or educate others.”

“Typically you’ll have a 4-H group or school group or church group that wants to do something, and usually the ideas come from the adult advisers,” said Bret Bicoy, president and CEO of the DCCF.

But last year DCCF received a Youth as Resources grant application from what Bicoy referred to as “a group of one.”

“We’ve never had quite a request like this one,” he said. “It’s not every day 9-year-old girls come to us asking for help because they’d like to assist to feed homeless people in our community.”

The request was from Harlie Busch, now 10 years old and a fourth grade student at Southern Door Elementary School, and her grant request was for $250 to put on an event to raise money for homeless people in Door County.

It was a couple of chance encounters that got the ball rolling for Harlie. The first came in December 2012 when she was volunteering as a present wrapper for the Family Centers of Door County’s Christmas Store. A young woman she was wrapping with said she was living in her car.

“It got me thinking about how many other people are homeless,” Harlie said. “A coincidence, a couple weeks later, there was a homeless guy by Walmart with a sign that said ‘Please help me. Donate’.”

That’s when Harlie told her parents, Pam and Mike Busch, that she wanted to do something to help Door County’s homeless.

“I was pretty intrigued,” Pam said. “At first we didn’t really take her serious. How would a small child do something like that? The more she talked about it, the more we started thinking about how we could pull this off and who would she donate to.”

After some research, they decided to apply for and were awarded a $250 Youth as Resources grant.

That’s when the serious planning began for Harlie. She kept a notebook where she wrote down ideas for the event.

“I wouldn’t want to play or watch TV. I would write notes,” she said.

Then they nailed down a date and location and alerted the media.

“When the first Pulse story went out, we had people calling and sending my mom emails,” Harlie said. “It was amazing, all the emails and calls mom was getting.”

“We were getting phone calls as soon as people heard about it,” Pam said. “There were so many donations, we didn’t even have to use the whole grant. We only used $155.”

And at the end of the day, they raised $1,408.50, which they split evenly and Harlie distributed personally to two different organizations, Lakeshore CAP and Door County Community Resource Program (Feed My People/Clothe My People).

“That’s a pretty good return on our investment,” Bicoy said. “This was a little girl who decided that something needed to be done and refused to stand idly by, and it really was remarkable. We were tickled pink to be asked.”

“When I handed them the money, they were overjoyed. I felt very good about that,” Harlie said.

And what did she learn from the experience?

“People are very, very helpful and they really care,” she said. “They’re seeing what I’m seeing, that a whole bunch of people don’t have homes.”