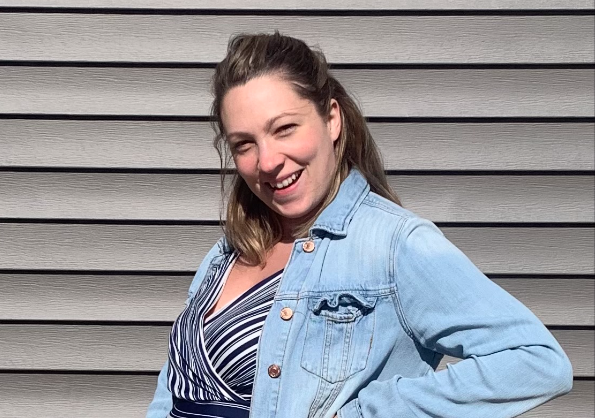 Abby Duebler is a surrogate mother who will give birth in August to a baby she will give to a couple that is unable to conceive on their own. Submitted.

Abby Duebler posted news on social media in February that she was pregnant again. Family and friends were delighted to hear that she and her husband, Ryan, would be welcoming their fourth child. The celebrations soon turned to confusion, however: The baby wasn’t hers. Duebler is instead a surrogate who is carrying a baby for a couple who are unable to have their own.

“For something that comes so easily to me, maybe I should help somebody that it has not been easy for,” Duebler said. “Kind of give that gift and feel purpose from that, too.”

Mother’s Day is a time to be celebrated. But for 6.1 million women, representing 10% of all American women in their child-bearing years,  the day may be a painful reminder of what they cannot do: give birth to a child.

“For me, fertility has never been an issue; I’ve been very lucky,” Duebler said. “I did really well through pregnancy.”

Abby and Ryan Duebler became interested in surrogacy in 2014 but wanted to wait until they had completed their own family. After the birth of their third child in 2017, Duebler applied for a surrogacy program with Alternative Reproductive Resources (ARR) in Chicago.

The process began with a general application before moving into Zoom interviews, during which the company’s staff learned more about Duebler. Then the tough part began: The Dueblers went through a rigorous meeting with a psychologist before meeting the intended parents and negotiating the specifics.

“I can’t imagine what it’s like to not be in control of the situation, that you’re not the vessel,” said Duebler. “So there was some give-and-take with that.”

Duebler said that although her body is helping a couple in need, some family members and friends have expressed concern. She said the question she hears most is, “How will you be able to give up the baby?”

Duebler is trusting the system that’s designed to help her maintain a healthy relationship with the situation.

“I haven’t been through it before, so I can’t honestly say I know how I’m going to feel,” she said. “But it’s just about having a healthy mental relationship [to the situation], knowing that it could be hard at some point. But as long as I come to terms with that as often as I do, I am preparing myself.”

Also serving as a reminder that this baby will not be hers are the financial aspects. The base compensation for first-time surrogates working through ARR is $40,000, according to the company’s website. This figure can vary depending on the company and whether the woman is experienced or a first-time surrogate.

ARR covered Duebler’s costs for pre-pregnancy medication and IVF. After six weeks of pregnancy, she’s compensated monthly until the baby is born and is reimbursed for everything involved with the pregnancy, such as prenatal vitamins, travel to appointments and maternity clothing. In addition, if she experiences postpartum depression or anxiety, she receives a stipend that can be used anytime after the pregnancy.

Duebler is not going through the pregnancy alone. Her husband has been her “rock, my best friend,” and beside her throughout the journey.

“It’s been really cool that he has been in this just as much as I have,” she said. “Yes, I’m literally carrying the baby, but he’s carrying me.”

While Duebler and her husband have been preparing themselves, they have also had their kids to consider. Duebler didn’t find much literature available to guide her when trying to explain surrogacy to children.

When first broaching the subject with her three children, Duebler asked, “How would you feel if Mom was pregnant again, but we are going to give this baby to someone else who doesn’t have a baby and wants a baby?”

The more she talked about it, the more they opened up to the idea. Now Duebler keeps a photo of the intended parents on their fridge at home, where she can say their names to her kids and remind them that these are the people who are going to take the baby home.

Until the baby comes, Duebler updates the parents weekly on how things are going and how she feels. The next big step – aside from the birth – is planning for what will come after.

Being in contact with the child is determined completely by the intended parents and the carrier. Duebler is fine with minimal contact and giving the parents privacy, but she hopes to be able to send birthday presents every year and get updates once in a while.

Duebler encourages anyone who’s curious about what she’s experiencing to ask questions.

“I love talking about this,” she said. “I think the more we talk about something, the less taboo it is, and the healthier our relationship is with that subject.”