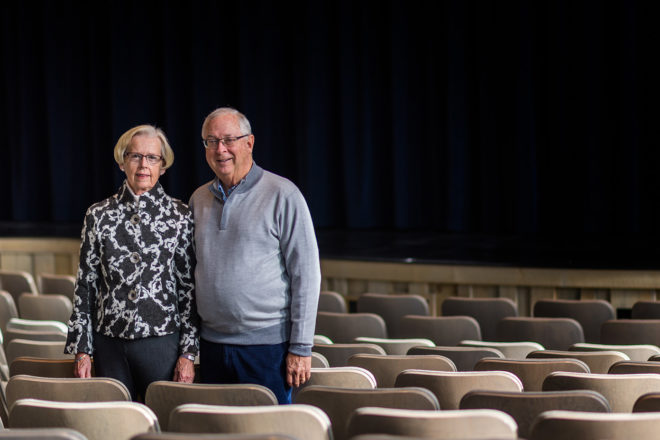 There’s something so authentic and humble about Mike and Marge McCoy’s giving that it sometimes causes people to hesitate when referring to them as leaders, said Bret Bicoy, president and CEO of the Door County Community Foundation (DCCF).

“Unquestionably, unhesitatingly, everyone considers them leaders in our community,” Bicoy said, “but the word ‘leader’ seems to feel a little too loud when talking about Mike and Marge. When people describe Mike and Marge, the word that comes up more often than any other is ‘commitment.’ The McCoys don’t do anything halfway. Whether it be traveling long distances because a grandchild has a game, or diving headlong into a fundraising campaign for a favorite charity, the McCoys commit themselves fully to the things they love. And that is how they lead.”

In 2019, that leadership earned the couple recognition as the DCCF’s Philanthropists of the Year, but they initially hesitated to accept the award, preferring to continue giving under the radar.

“It’s a tremendous honor; there isn’t any question about that,” Mike McCoy said. “In all honesty, when they called and said they wanted to do it, we thought long and hard about whether we wanted to have it done because that’s not the way we operate. We’re not doing it to be recognized publicly.”

It’s been more gratifying for them to be able to give significantly without people knowing, Mike said, but he and Marge ultimately decided to accept the award only in hopes that it would inspire others.

“If we can inspire others to step forward to begin with or even further, then we are doing something else besides being recognized,” Marge McCoy said.

They are Wisconsin natives who moved to Ellison Bay year-round upon retiring in 2006, and this year they celebrated

In addition to devoting time to Bethany Lutheran Church in Ephraim, the couple soon became involved in numerous other Door County organizations, including the Door County Land Trust, Neighbor to Neighbor, the United Way and the Crime Prevention Foundation. Mike also served on the DCCF board.

“We pick and choose things that really mean something to us,” Marge said, “and then try to back them however we can to the best of our ability. It’s not to say that we don’t give to other organizations.”

Prior to moving to Door County, Mike served as executive vice president and CFO of Hormel Foods Corporation in Minnesota. He’s chair of the board of regents at Wartburg College in Waverly, Iowa, to which the couple has also made significant donations.

Marge was an active volunteer and board member for both Meals on Wheels and the American Red Cross, which named her Volunteer of the Year in Minnesota.

Mike serves on the Northern Sky Theater board of directors and has been involved with the organization since 2013. Dave Maier, Northern Sky’s managing director, says the couple has been an integral part of the organization — not only financially, but through guidance, mentorship and insight. He said that without their support, Northern Sky wouldn’t be where it is today.

“There’s a lot of folks that do this up here, but [Mike and Marge] kind of epitomize what I find amazing about the philanthropic leaders in this county,” Maier said. “We’ve been blessed by having the two of them as part of this organization, and I just can’t emphasize that enough.”

The McCoys not only prefer operating under the radar, but Mike said they direct their monetary gifts to organizations that are also a bit under the radar — groups such as Neighbor to Neighbor, a nonprofit that connects volunteers with clients who desire a companion or require care and loans of medical equipment — and that don’t always receive lots of media attention.

“That’s another example of an organization that desperately needs help in terms of being able to carry out the mission that they have and what they’re trying to get done in Door County,” Mike said. “Those are things I think people forget about.”

“We’ve been blessed in our lives,” Marge said. “You have to give back, and this is our way of doing it.”