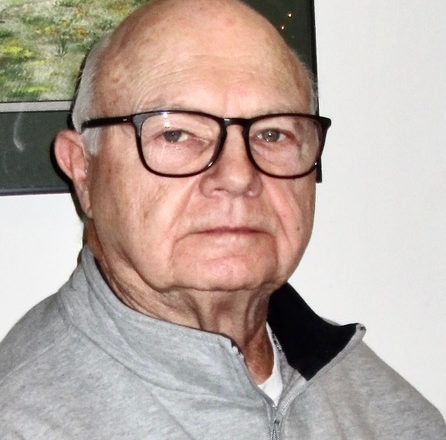 He was christened Gaylord Herbst, but long before he became a star athlete in multiple sports at Sturgeon Bay High School, he was universally known as Giz. Herbst graduated in 1962 as the most valuable player and co-captain of a football team that had won the conference title three years running.

He continued his success in athletics at UW-Stout, graduating in 1966 with a degree in industrial-arts education and an honorable mention on the National Association of Intercollegiate Athletics team. Herbst stayed on at Stout an extra year, serving as assistant football coach and completing a master’s degree in guidance and counseling.

In 1967, he got his first full-time job as assistant football coach at Seymour High School, and he stayed there 33 years as a graphics teacher, athletic director and coach.

So when did Herbst find time for history?

“The interest was always there,” he said, “but as a hobby.”

It became much more than a hobby when he retired in 2000. He and his wife, Linda, moved to the home they’d purchased in Egg Harbor in 1985 and opened Yore Place, a gallery that sells his paintings and son Fred’s wood-fired pottery.

Herbst, who had painted for years, started devoting a lot of time to his watercolors. It’s not surprising that they feature Door County history, ranging from boyhood memories of growing up in Sturgeon Bay to lighthouses, scenes of deserted farms, long-ago maritime life and many, like “The Sister Bay Social Club,” that he calls “historic duplications.” There are also a dozen “fantasies”: scenes where streams with covered bridges replace highways through Door County villages. He calls them “artist liberties.”

Herbst has been involved with the Egg Harbor Historical Society almost since its formation in 2010, serving on the board for most of that time.

“I am interested in seeing how things developed over time,” he said, “and how they influenced what we have now.”

He’s learned a lot about early Egg Harbor history from the Door County Newspaper Archives at the Sturgeon Bay Library: an online collection of every issue of 13 publications, reaching back to the Civil War era.

“It’s a great resource,” Herbst said. “Those old newspapers did a wonderful job of reporting what was going on in towns and villages of the county. We can explore the past by using old news stories word for word. I’ve learned how Egg Harbor worked with farmers to help the area become an agricultural hub and how Dr. Horace Franklin Eames, John Bertschinger, Herman Birnschein and Harvey Haen helped it become a tourist center. I could spend hours and hours a day doing research.”

The important thing about all this research is that Herbst isn’t doing it just for himself. He’s compiled eight books – Egg Harbor’s Heritage, Building a Village, A Photo Album of Chief Roy Oshkosh, The Door County Bookmobile, The Horseshoe Bay Settlement, Egg Harbor’s Dr. Eames, The Bertschinger Brothers and Harvey and Helen Haen – for the history center at the Kress Pavilion.

He’s also worked on many of the historical society’s projects, including creating walking and driving history tours; organizing an annual Taste of Egg Harbor celebration; compiling research to restore the original Door County Bookmobile, which will be used as a traveling history museum; writing a quarterly newsletter for the society; and helping to secure 501(c)(3) status for Horseshoe Bay Farms Inc.

As “something to do during the pandemic,” he posted daily bits of information from the matching dates in a newsletter that Leathem Smith Shipbuilding published during the WWII era.

In 2018, Herbst was nominated for the Golden Heart Lifetime of Service Volunteer Award “for making history come alive for thousands of Egg Harbor residents and visitors.”

After all these years of research and involvement, why does he think history is so important?

“People in the past sacrificed a lot,” he said, “and I have a sense of appreciation for what others have done for us. I understand why Door County has gone from an agricultural society to one focused on tourism, and that enables us to pass on to future generations why we are where we are. We’re supposed to learn from the past, so if there were mistakes, we won’t make them again.