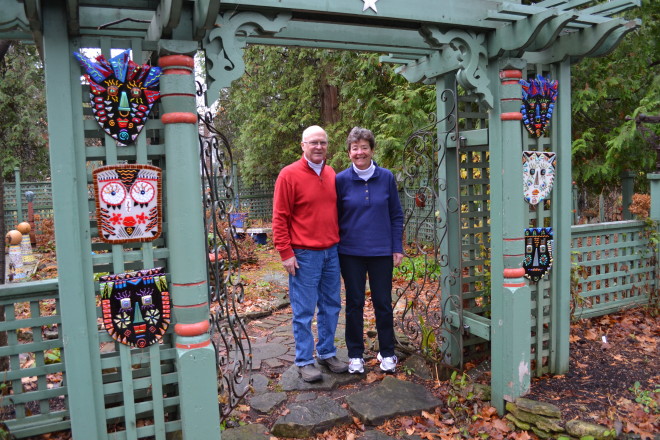 Barbara and Doug Henderson in their Bay Shore Drive garden, which features a number of glass fused art created by the couple.

Though their shrubs and flowers die back in the cold seasons of the Door Peninsula, there remains one constant in the gardens of Doug and Barbara Henderson’s Bay Shore Drive home – vibrant and whimsical fused glass creations.

Inside their guest home and art studio is much the same – framed pieces of opaque and translucent creations, vases of multi-colored glass flowers, tiny but uniform squares lining their bathroom mirror, and countless masks, all created by the Hendersons themselves. 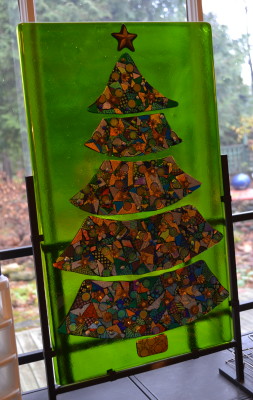 The medium is a far cry from what either of the Hendersons are used to – prior to discovering their talent with glass, Barbara worked in fibers while Doug dabbled in photography. For Barbara, who earned an art degree from the University of Denver, art has always been her way of life. But for Doug, with degrees in business management and a master’s in education, art rarely lent itself to his technical work.

“When I retired, I wanted to do something and my goal was to be able to do something well enough that the art that I was making would be good enough to be in a respectable gallery,” Doug said.

At the time, Barbara was showing friends how to create mosaics. With limited knowledge and a tiny kiln, the couple started making tiny fused glass circles to use in the mosaics. Eventually they hopped on the same path as their artistic family members, including their daughter Laura, who worked in fused glass and eventually opened a small gallery in Oak Park, Illinois.

The timing worked out perfectly, as the couple had begun to build up the garden on their property.

“I thought it would be fun and I really wanted to make things not necessarily for sale but for us for the yard,” Barbara said. “I wanted to make a garden and I wanted to make glass, whimsical things that we would put in our yard and our house.”

With family support in place, they began taking classes in fused glass. 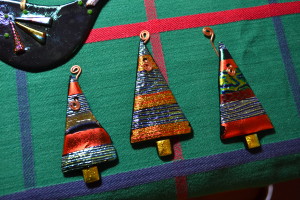 “We just began to take classes at the wholesaler and then at a couple conferences – one in Las Vegas and one in Portland, Oregon,” Doug said. “Our theory was that we wanted to connect not just with ‘Joe Blow’ who would be teaching a class but ‘Joe Blow’ who was a known glass artist and we could see his or her work.”

Among the artists they took classes from are world-renowned artists Michael Dupille, best known for his pioneering works in fritography, Patty Gray, Richard Parrish, Nathan Sandberg and Bob Leatherbarrow – “lots of people who are experimenting and developing new techniques,” Barbara said. “And that’s what we’re interested in – experimenting and learning and seeing what glass can do.”

“There are two parts of fusing: the creative part, which is taking the glass that you have available and putting it together to make something, whether it’s a functional piece or a decorative piece… we play with that,” Doug said. “And the second part of creating fused glass is the technical aspect. That’s one of the major things that we learned in taking classes.” 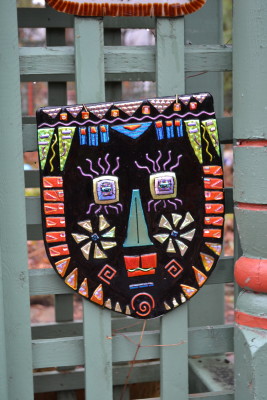 A fused glass mask by Doug and Barbara Henderson.

Using those lessons, the couple has established a collaborative relationship making whimsical creations – masks, flowers, ornaments, wall hangings, framed pieces and platters – both for their own home and for sale through their art business, Thimbleberry Designs, LLC. They also work regularly in mixed media.

Doug also achieved his goal of being accepted into a gallery. Locally, their work has been exhibited at the Door County Art League, Woodwalk Gallery and The Flying Pig.

“The whole process of creating, working with art and coming out with a final product, whether it’s something that goes to a gallery or something for us, is really fun,” Doug said. “I think that’s the end result of keeping active, learning new things and everyday is a learning process when we’re making things.”

The Henderson’s art can be found at Woodwalk Gallery, 6746 County Road G in Egg Harbor; The Flying Pig, N6975 Hwy. 42 in Algoma; and The Gift Itself, 125 N. Broadway in Green Bay. For more information, email [email protected]