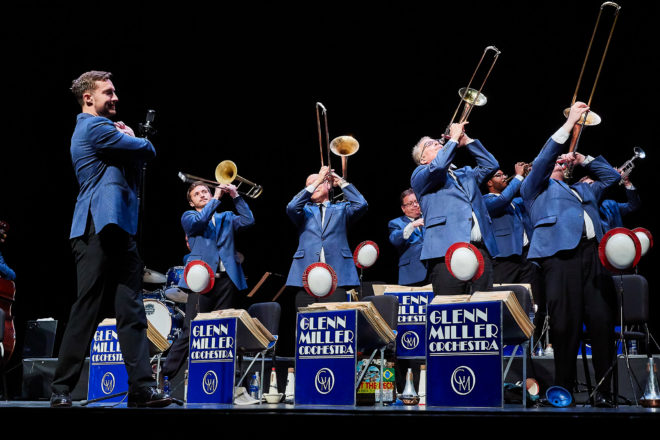 Is there anything finer than a big band firing on all cylinders?

In case you haven’t heard one in a while, let me answer that for you – no, there is not.

The Glenn Miller Orchestra proved that Saturday night at the Door Community Auditorium.

Wow! What a band. Five reed players, four trombonists, four trumpets, piano, bass and drums, two singers and a vocal group called the Moonlight Serenaders with the two lead vocalists and three of the instrumentalists leaving their sections to sing.

You might think that a band that had its heyday as the No. 1 group in the country in the late 1930s into 1942 might not have a place in this 21st century world, that it would be purely a nostalgic trip back into the lives of the greatest generation, but the current incarnation of the band proves that this is timeless music.

What makes a great big band? It’s all about the sound, and:

Teamwork: Everyone has a specific job to perform to uphold the integrity of the sound. All for one and one for all!

Precision: Glenn Miller worked hard to develop a unique sound for his band. And when he found it – that’s the sound! It was based on musicianship and technique. Plungers and various other mutes are used by the GMO trumpet and trombone players to amazing effect.

Choreography: The sections have moves that have actual meaning in the sound of the band.

Dynamics: Subdued when necessary and wailing when needed.

Nick Hilscher, who has been music director of the Glenn Miller Orchestra since 2012 and before that was lead singer, is a great onstage presence as band leader and still lead singer. He’s got a great voice and it’s obvious he loves this music.

The concert began and ended with Miller’s “Moonlight Serenade,” which Hilscher described as the band’s theme song. The many other hits played evoked responses from the audience, but so did the more obscure tunes and the covers of other people’s music.

It was good to see an enthusiastic turnout for this amazing band.