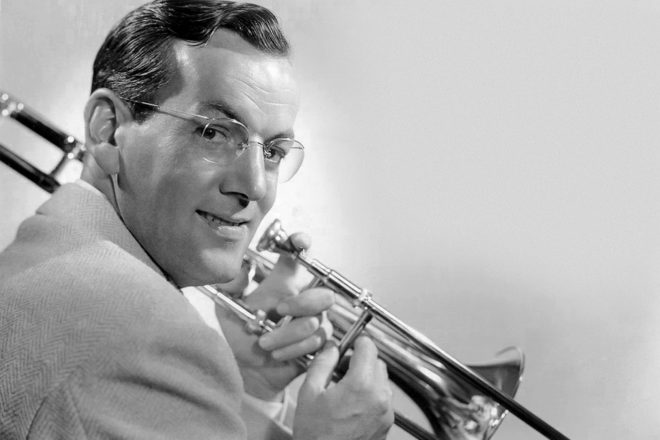 “Glenn’s band really [was] the rock stars of the day,” said Nick Hilscher, music director of today’s Glenn Miller Orchestra, which will perform June 29 at Door Community Auditorium. “By the time that he broke up the band at the height of its popularity in 1942, he had more Top 10 hits than The Beatles would have a couple decades later.”

Hilscher – born in 1977 – has been a fan of the Glenn Miller Orchestra and big band music since he was 11. He was a 20-year-old college junior when he auditioned to join the orchestra as a singer. He remembers the audition well because it took place on Super Bowl Sunday in 1998, when the Packers were playing the Broncos. Although he was born and raised in Georgia, his grandfather was from Ripon, Wisconsin, and his father was born in Fond du Lac.

“All my buddies back home who are Falcons fans don’t like the fact that I’ve always pulled for Green Bay,” he said.

Despite not seeing the Packers lose that Super Bowl, Hilscher passed the audition, and at age 21 joined the Glenn Miller Orchestra.

“I committed to leave school,” he said. “I was between my junior and senior year. I came out and sang with the orchestra for a year, then went back and finished a piano degree, and then came back on the road in 2000 and sang with the band until 2005, when I left to get married. I was asked to come back as music director in January 2012.”

Hilscher is the ninth band leader of this post-Glenn Miller Glenn Miller Orchestra, which has been performing up to 48 weeks each year since forming in 1956.

“It’s a busy life in the fact that we’re always on the move,” he said. “Sometimes our only downtime is traveling on the bus. We’re on the road about 45 to 48 weeks every single year. When we’re on the road, we’re averaging four or five shows per week. It’s pretty busy for us.”

How do you explain the enduring appeal?

Hilscher attributes it to Glenn Miller himself.

“He had these huge staples that have been played for decades, from ‘In the Mood’ to his theme song, ‘Moonlight Serenade’; the first gold record, ‘Chattanooga Choo-Choo’; ‘I’ve Got a Gal in Kalamazoo,’ ‘Tuxedo Junction,’ ‘Pennsylvania 6-5000,’ ‘Little Brown Jug.’ These are tunes that we play pretty much every show,” Hilscher said. “So the music itself is very popular still, as we tour from town to town and see the age diversity in our audiences. It’s not like it was when I joined at the age of 21, [when] the WWII generation was about 95 percent of our audience. Depending upon where we are, we still really fill it up. A lot of baby boomers, but also reaching down to 20-somethings.”

Besides the swinging hits, there is the enduring mystery of Glenn Miller, who broke up the band in September 1942 – at the height of its popularity, when he was its superstar – so he could join the war effort. He was given the rank of captain and formed the Glenn Miller Army Air Force Band, which played more than 800 performances for troops.

Miller served under General James Doolittle, who told the bandleader in 1944, “Next to a letter from home, Captain Miller, your organization is the greatest morale builder in the European theater of operations.”

On Dec. 15, 1944, Miller boarded a single-engine aircraft in London. He was flying to Paris ahead of the band to set up performances celebrating the recent liberation of Paris, but the plane disappeared in bad weather over the English Channel.

“So there is this mystery: What happened to Glenn Miller?” Hilscher said. “I think that has contributed as well.”

Hilscher said the nine music directors of the Glenn Miller Orchestra – beginning with the Glenn Miller Army Air Force Band drummer Ray McKinley – certainly stamped the band with their own personalities. Hilscher said at certain stages, under different musical directors, the band began taking on the sounds of whatever was happening in jazz and big band of the particular decade they were in.

“Larry O’Brien came along in the ’80s, and he helped to hearken back more toward the original band,” Hilscher said. “I worked for him for about five and a half years. When I became music director – me being a fan of Glenn’s original band – I tried to bring it back. Not that we’re a copycat band.”

Hilscher said that at the Door County show, the audience can expect to hear most of the hits, as well as some rarities.