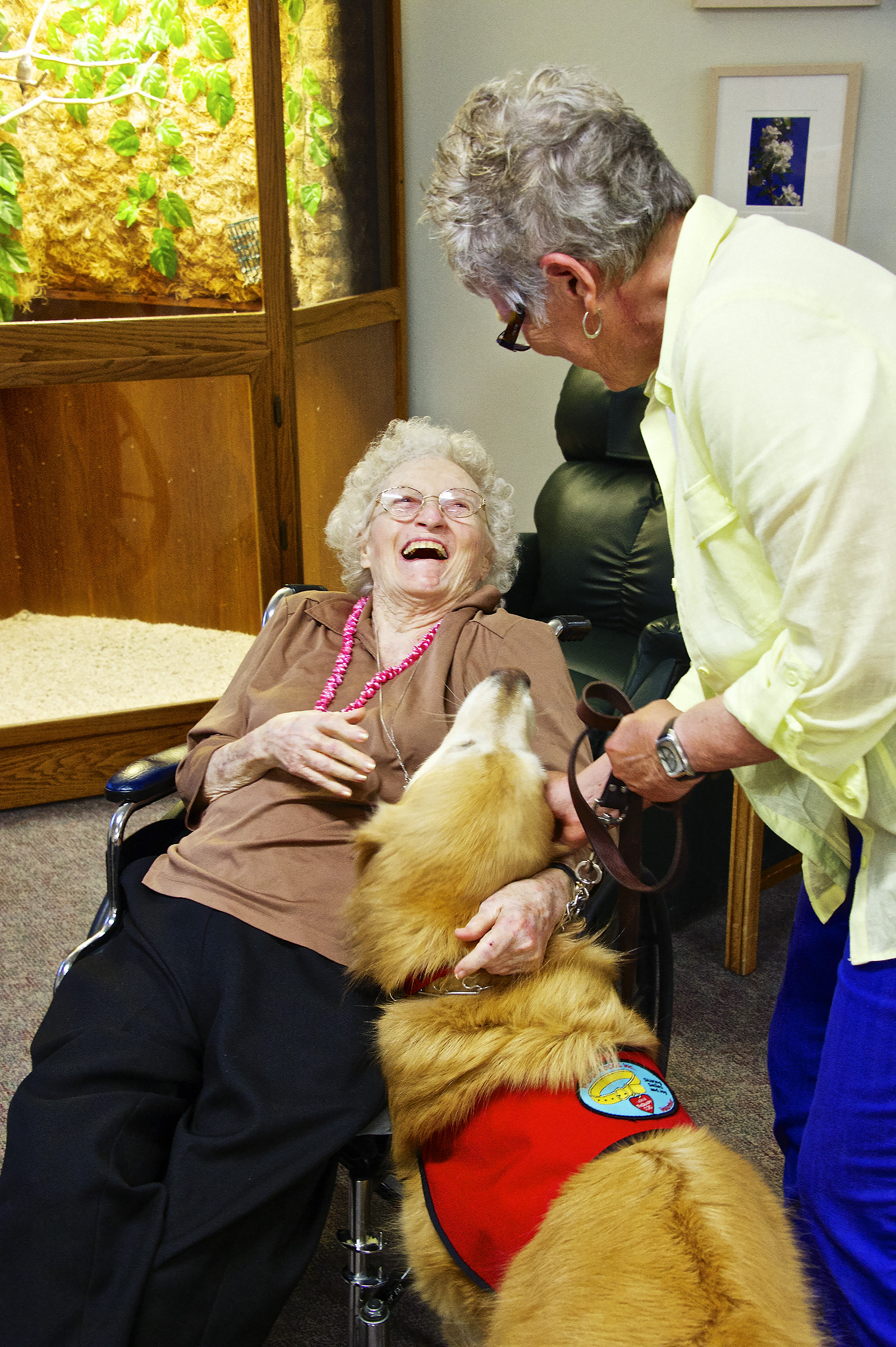 It is said that every person has a story to tell. Gloria Dougherty has at least two. The one she was happiest to talk about on a recent day involves Amos, her almost-12-year-old golden retriever.

When he was six, Amos attended classes at Birchwood Kennels in Sturgeon Bay to become a therapy dog. Tested off-leash when he completed the course, he failed to pass. (When Gloria mentioned to a friend that Amos might not be the sharpest knife in the drawer, the friend said, “No, he’s more like a butter knife.”)

But Gloria knew that the big dog had a special talent. Retested on-leash at a hospital, nursing home and park, his love of people was obvious. Amos, graduate therapy dog, had found his calling.

For six years, Amos and Gloria have visited Scandia Village in Sister Bay on Tuesdays. One resident, who had owned goldens, formed a special bond with Amos. When Gloria mentioned that she planned to take Amos to the man’s memorial service at Björklunden, someone wondered if that would be appropriate.

“Well,” Gloria said, “if there’s a problem, we’ll just stand outside and be greeters.”

There was no problem. Mark Breseman, Björklunden’s executive director, said, “I’m so glad you brought Amos. Our friend would have loved it.”

Another of Amos’s late friends, a former doctor and pilot, was confined to a motorized wheelchair at Scandia.

“Amos filled the paw prints of the beloved dog the man had lost,” Gloria said. “He always had a bowl of water waiting for Amos, and Amos had memorized the route around several turns in the hall to reach his room.”

On his deathbed, the man asked for Amos to come see him one last time. Since he could not reach down to pet the big dog, he patted his bed, inviting Amos to jump up beside him. “He won’t do that,” Gloria said. “He’s been trained not to.” But when the man patted the bed again, Amos didn’t hesitate. “See,” the fellow said. “He knows something is different.”

“Retrievers are needy dogs,” Gloria says. “They need a lot of love. Amos and his friend shared that.”

Gloria has been on a brief respite from Scandia this summer, recovering from the loss of another person to whom she was very close.

It may have been someone at Scandia who began calling him Famous Amos, or it may have been one of the children who flock to the Sister Bay Library every Thursday in the summer to read to him.

Amos listens attentively while youngsters read – even if the books are in languages other than his native English. Readers puts dots on a map of the world to identify their homes – so far, that includes 23 states and 14 foreign countries, with recent additions of Utah, Japan and Poland.

“Children around here have grown up with Amos,” Gloria said, “and they’re excited to greet him whenever we’re out and about.”

Amos is likely the only dog they’re apt to meet with his own picture book and trading cards. There are two versions of the cards – one featuring a serious pup and the other a more mature, smiling Amos in his Packers sweater and cheesehead. The flip side lists his favorite sports (swimming, retrieving tennis balls and watching the Packers) and the things he’s afraid of (ladders, vacuum cleaners and thunderstorms).

Gloria says this appeals to children who share some of the same fears and seem to feel that, if Amos is also afraid, it’s OK.

Gloria’s other “story” began on June 6, 1968, when she was a young wife and mother, living in Pasadena, Calif. She had gone to sleep the night before after listening to Robert Kennedy’s thank-you speech after winning the California primary and was unaware of his death until she saw the headlines the next morning.

“The next thing I knew,” she said, “my yard, our whole block was full of men in suits – FBI agents. Sirhan Sirhan lived up the street. He had to have walked right by my front door with the gun in his pocket on the way to the bus that took him to the Ambassador Hotel.

“That day probably changed the course of my life. Ever since, I’ve been interested in gun control. I supported the Brady Bill and sent money to the Brady Campaign to Prevent Gun Violence. And you can see how successful I’ve been – a pretty damn poor job!”

Her determination never waned as she raised two children, worked as an ICU nurse/educator and supported the work of her husband, Ron, a cardiologist, but it became even stronger in the era of school shootings.

After the murder of 20 children and six adults at Sandy Hook Elementary School in Connecticut, she sent legislators cards with the names of all the victims, urging action to tighten gun laws.

Gloria turned her despair over the shootings at Marjory Stoneman Douglas High School in Parkland, Fla., last Valentine’s Day into positive action that is having far-reaching results. A long-time fan of the greeting cards produced by the Cardthartic Company in Champaign, Ill., Gloria sent cards to the Parkland student activists that said, “We don’t know why they had to leave us, we only know it was too soon.”

Cardthartic, in the meantime, posted, “We think a lot of you are probably concerned about how to talk to your children and grandchildren about this tragedy. There’s a free card.”

And then Gloria went a step further, writing to Cardthartic to say: “I am a long-time fan, and I buy Cardthartic whenever I can. In the past year, I’ve sent your wonderful Worry Dolls card to at least a dozen friends suffering in these hard times. But your message today has left me feeling hollow. 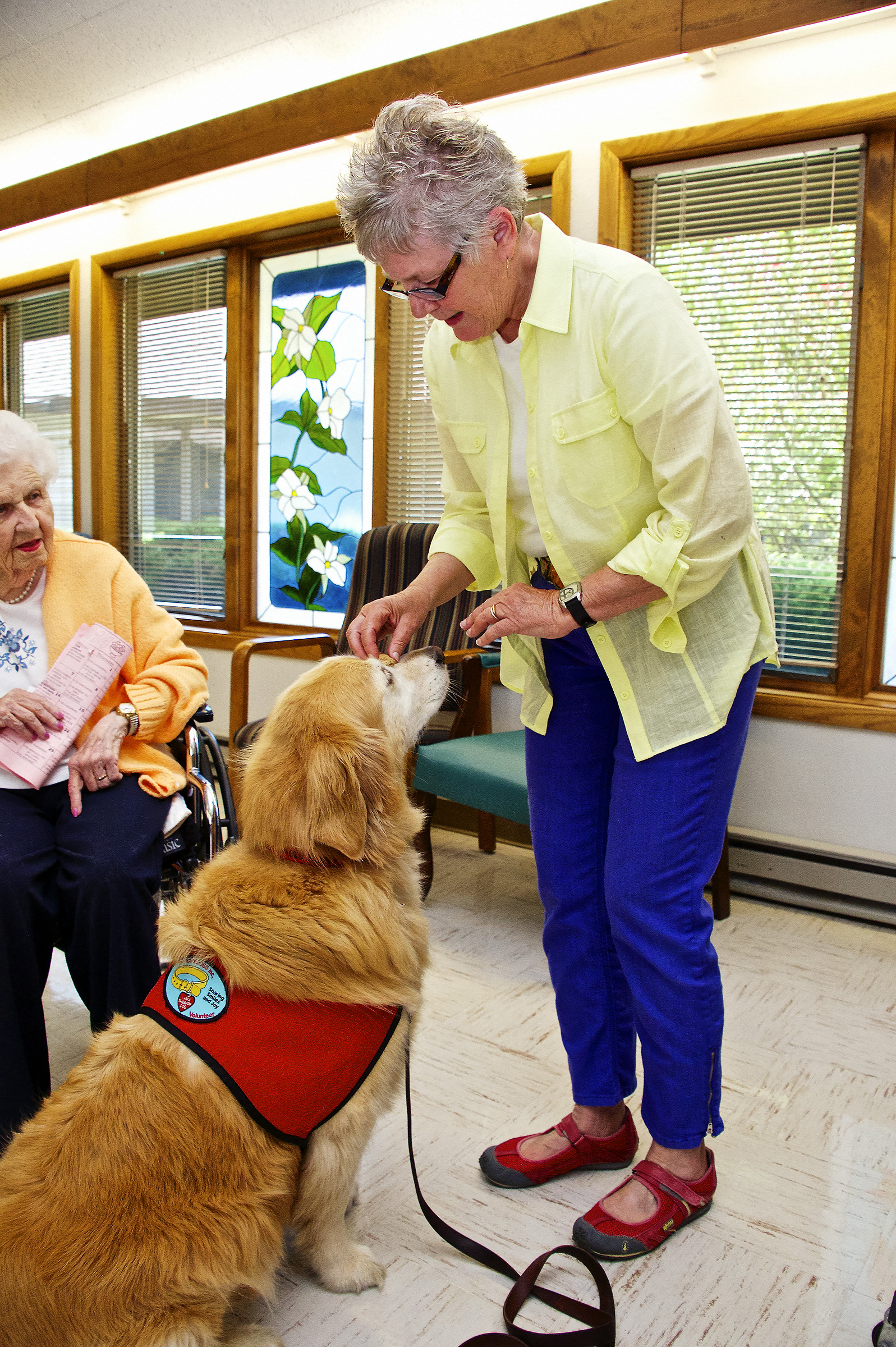 The response from Cardthartic was that they generally took more of a supportive vs. an activist role.

But that was not the end of the story. Within a few days Gloria received an email from Cardthartic, asking for her approval of a card their creative director had designed. It was the red postcard that Cardthartic is providing free in response to requests from all across the country. As of mid-August they sent 27,000 to “cardies” all over the country.

The front has the words “Please Listen,” while the reverse side says: “I want you to hear . . . and Please Act Now, with space between to write a message.”

Ron’s birthday gift to Gloria was 1,000 stamps. So far, she’s addressed at least 1,500 to state and national legislators and given them out to anyone who’s interested – for example on March 14, a month after the Parkland shooting.

“The media made much of the 800 people who marched in Green Bay,” Gloria said, “but not much was said about the 80 of us assembled that day to protest and write postcards at The Spa at Sacred Grounds in Ephraim. Old people, a young couple from Florida. In the middle of winter. In far northern Wisconsin. It was incredible.

“People say a legislator isn’t going to change his mind because of a postcard,” she said. “Maybe not. But I hope that the young people working in that office may be moved to think about what they’re supporting.

“I’ve been trying for 50 years, and I am heartened that the young are taking up the battle. They won’t back down. They won’t go away. Road-weary elders can see the baton being passed. But some of us are not just letting the baton be passed. We are running hard right behind them!”