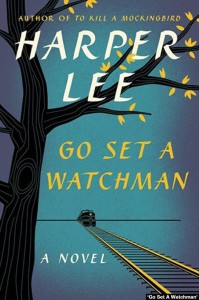 In February of 1957, literary agent Annie Laurie Williams found herself reading a manuscript submitted by an unknown, unpublished young woman who had dropped out of law school and moved to New York, hoping to become a writer. Her novel told the story of 26-year-old Jean Louise Finch, an unhappy resident of New York City, and her father, Atticus, a lawyer who practiced in a small Alabama town. Williams saw potential but declined to send the manuscript to a publisher, and for good reason. The novel had barely a wisp of a plot, and it was short on action, long on talk – lengthy discussions and arguments that filled whole chapters but resolved nothing. And the young author had not yet developed a readable style. For example, her eighth chapter began with this sentence: “With the same suddenness that a barbarous boy yanks the larva of an ant lion from its hole to leave it struggling in the sun, Jean Louise was snatched from her quiet realm and left alone to protect her sensitive epidermis as best she could, on a humid Sunday afternoon at precisely 2:28 P.M.” This strange work was titled Go Set a Watchman; its author was Nelle Harper Lee.

Williams had seen promise in Go Set a Watchman in spite of its many flaws, and she suggested that Nelle rewrite the work to place emphasis on Atticus rather than Jean Louise. With the help of a staff member of the J. B. Lippincott publishing house, Nelle rewrote her novel twice. It was hard work, and on one occasion Lee became so exasperated that she threw the manuscript out of the window and into the snow. But in 1960 Lippincott at last published the final draft as To Kill a Mockingbird, and Nelle became Harper Lee. The book was an immediate hit with both critics and the public. It won the Pulitzer Prize and was quickly made into a movie starring Gregory Peck.

As countless millions know, Mockingbird tells the story of Atticus Finch, his precocious daughter Scout (Jean Louise as a child), her older brother Jem, and their friend Dill. In an emotional high point of the novel, Scout and her companions watch in wonder as Atticus risks his reputation and his life to defend a black man who has been wrongly accused of rape. Gregory Peck’s inspired performance brought Atticus to life visually, and he became the most beloved character in American literature. Parents named their children Atticus, and young men and women went to law school to become lawyers and fight for justice as Atticus Finch did. The American Film Institute named Atticus Finch as the Greatest Movie Hero of All Time; he won this honor over Superman, Batman, Luke Skywalker, Indiana Jones, Robin Hood, all of the heroic cowboys and detectives, and the entire crew of the Starship Enterprise.

Meanwhile, the manuscript of Go Set a Watchman vanished into the darkness of Harper Lee’s safe-deposit box, and Lee herself became famously reclusive. She failed to publish another book. Decades passed. Lee’s eyesight and hearing began to fail, and she experienced a considerable mental decline. She moved into her sister’s home in Alabama and from there into an assisted living facility. Then in 2011, the manuscript of Go Set a Watchman was discovered by an appraiser from Sotheby’s auction house. Soon the word was out: a “new” Harper Lee novel had miraculously been found and would soon be published for the world to cherish.

From the beginning, the project was controversial. Some critics pointed out that Go Set a Watchman was probably nothing more than a rough draft; others wondered whether Lee had really given permission to publish the book. According to her sister Alice, “Poor Nelle Harper can’t see and can’t hear and will sign anything put before her by anyone in whom she has confidence.” Then when the book was released in July, many of Lee’s fans were horrified, and editorials and critics had a field day: the noble Atticus Finch, the role model of millions, was exposed as a bigot and a racist.

In Go Set a Watchman, Jean “Scout” Louise returns from New York to her hometown, Maycomb, for a much-anticipated two-week vacation. She immediately discovers that Atticus has become severely ill with arthritis. He can no longer tie his shoes, button his shirt, or use a razor. In order to eat at the table, he has to use specially modified tableware, and when he tries to pick up a glass of milk, he spills it in his lap. “I have a whopping cleaning bill these days,” he says. But in spite of his infirmity, he continues to practice law.

Meanwhile, Jean Louise’s childhood friend Henry Clinton repeatedly asks her to marry him. Atticus is pleased by the idea; after all, Henry is admired by the entire town of Maycomb; he was even chosen as Man of the Year by the Kiwanis Club, a great accomplishment. But Atticus’s formidable sister, Aunt Alexandra, tells Jean Louise that no one with a Finch pedigree should marry trash. Henry’s father was an alcoholic, and Henry himself shows the classic signs of trash: he licks his fingers while eating dessert, forgets to cover his mouth when he coughs, and even picks his nose when he thinks no one is watching. Jean Louise pouts and dithers. She wishes that her beloved Maycomb could stay the same forever, and she is disturbed by any change. But she has also become disillusioned with New York, a place that seems remote and detached from the real lives of ordinary people.

Then one Sunday afternoon Aunt Alexandra tells her, without a trace of disapproval in her voice, that Atticus and Henry have gone to a meeting of the Maycomb County Citizens’ Council. It seems that Atticus is one of the directors, and Henry is an enthusiastic supporter. Jean Louise grows apprehensive; she has read about such “Citizens’ Councils” in the New York newspapers. She sneaks into the courthouse and finds that just about every man in the county has come to the meeting – responsible citizens and trash alike. Atticus and Henry are sitting at the head table. Atticus himself introduces the guest speaker, who delivers a racist rant so vile that Jean Louise becomes physically ill. Her adored father is revealed as a white supremacist.

Reaction from fans and critics was swift. “For readers, it’s like learning that there is no Santa Claus,” wrote critic Jocelyn McClurg in USA Today. Peggy Noonan of the Wall Street Journal received an email from a friend: “I can’t bear to lose Atticus. I’ll just cling to Gregory Peck and pay no attention to what the author is doing.” The friend swore never to forgive Harper Lee. Meanwhile, cartoonist Clay Bennett drew a picture of a book titled To Kill a Role Model.

Other critics sensibly pointed out that unlike Bill Cosby, Atticus Finch is fictional, and that Go Set a Watchman is a rejected rough draft, not a deposition. Readers who love Atticus should remember that the usual destination for a rough draft is the wastebasket. Another famous fictional character, one Ebenezer Scrooge, was delirious with joy when he realized that the Ghost of Christmas Future had shown him a rough draft, that the visions of his horrible future were only shadows, and that he himself could write the final chapters of his own life. Scrooge, if he existed, would probably recognize Harper Lee’s lost novel as a book of shadows. Yes, it is possible to imagine that Atticus might have ended his days as a bitter old man, afflicted both in body and in spirit. But it is also possible to imagine the aging Atticus as a loving grandfather and a defender of civil rights.

So is it worth one’s time to read Go Set a Watchman? Yes, for several reasons. First, it gives insight into the creative process. Second, it paints a clear and disturbing picture of day-to-day life in the rural South at the dawn of the civil rights movement. And third, the occasional flashbacks to Scout’s childhood days are charming. In one episode, for example, Scout, Dill, and Jem decide to enact a baptism in the neighbor’s fishpond. Dill shows up wearing a sheet and moaning like a Halloween spook. When Jem demands an explanation, Dill replies, “I’m the Holy Ghost.” Complications arise when Scout emerges from the fishpond, completely naked, and immediately confronts a visiting minister and his wife who have come to dinner at the Finch home. Even Atticus’s most devoted fans can read such a tale with pleasure.

Carolyn Kane is Professor Emerita of English at Culver-Stockton College in Canton, Missouri. She is the author of the novel Taking Jenny Home, which was named to Kirkus Reviews’ Best Books of 2014. She divides her time between Door County and rural Missouri.