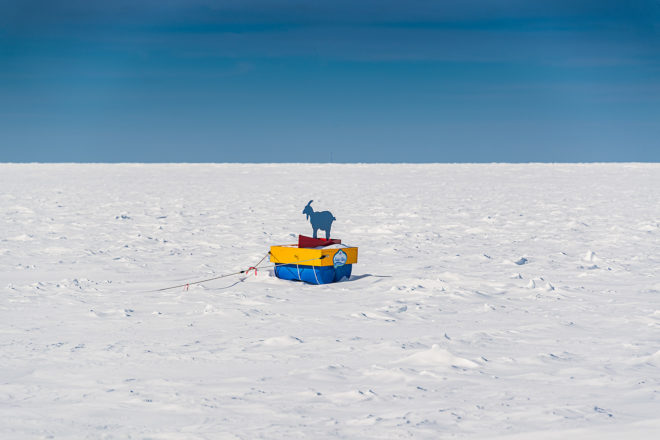 Would you believe me if I told you there’s a goat on a boat in Sister Bay?

The three-foot-tall, blue, wooden goat on a boat is hanging out at the Sister Bay Marina near the A-dock. Louise Howson, Sister Bay Advancement Association coordinator, even drove me out to see it in person.

The goat is part of Sister Bay’s 82nd annual Ice Out Contest, in which visitors and locals guess the date and time when the ice in the bay will melt or “go out.” Participants may cast their ballots at 17 local businesses, each offering its own prize; and they may vote as often as they want at as many businesses as they want, so they have the chance of winning multiple prizes.

Winners from each business are then entered in a grand-prize drawing, in which one name will be drawn to receive the grand prize of $100 in cash.

The contest is also being held at Gibraltar Schools, where students will have an opportunity to win prizes donated by Pirate’s Cove, Sister Bay Bowl and Bayshore Outfitters.

Ballot boxes were distributed Feb. 1 and will be removed sometime between the middle and end of March.

Howson and her team wondered how they could make the contest even more fun this year. In the past, the timer was present, but an element was missing that would make the quirky contest stand out to the public.

“That’s when we decided to have people be able to guess when the ice goes out because the goat on the boat will float,” Howson said. “We thought it would be fun for everybody to be able to drive by and see something in the dead of winter.”

The Parks Department provided the goat, and Greg “Fuzzy” Sunstrom built the boat.

“You never know who will be floating in the boat next year,” Howson said.

The goat on a boat even caught the attention of Fox 11 News, which did a short segment on Feb. 7.