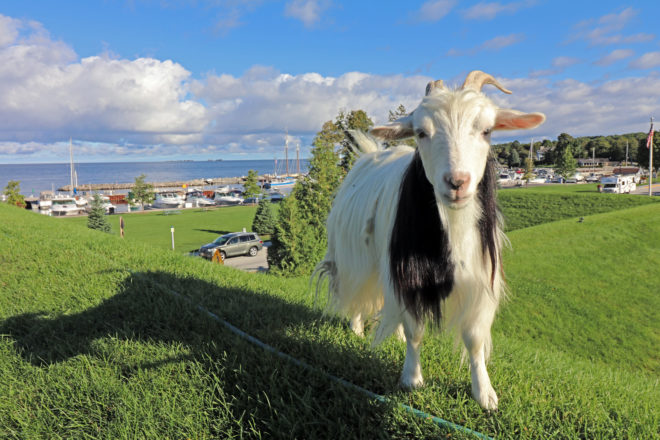 It’s all things goats in Sister Bay this weekend at the Roofing of the Goats Parade and Goat Fest. Photo courtesy of Sister Bay Advancement Association.

The goats are back in town. Or, at least, they will be this weekend.

If you’ve ever traveled through Sister Bay during the summer, you’re familiar with the bottleneck that tends to happen in front of Al Johnson’s Swedish Restaurant and Butik as drivers and pedestrians alike crane their necks to catch a glimpse of the goats that spend their days grazing on the restaurant’s sod-covered roof.

On Saturday, June 11, the goats will return to the restaurant’s roof – and invite other goats to join them along the way – during the Roofing of the Goats Parade and Goat Fest. The event, which draws about 40 goat participants in the parade and a few thousand onlookers, will kick off at 11 am at the corner of Mill Road and Highway 42 in downtown Sister Bay, and it will end at the restaurant.

But the event didn’t always draw large crowds. In fact, the first parade didn’t showcase even one goat.

“That first year, we had people turn out for the parade, but no goats,” said John Nelson, one of the event’s founders. “The weather was awful and rainy, and goats are notoriously finicky about weather. But we had people came out, dressed in their Viking costumes, and they were the only beasts in the parade that year.”

The weather cooperated the second year, “but no one took it seriously,” Nelson said. He persuaded Ralph Johnson to go fetch one of the restaurant’s rooftop goats, Inky, to be in the parade.

“So we had one goat in the parade with hundreds of people,” Nelson said.

Now, celebrating its eighth year, the event is projecting its largest turnout yet, and for good reason.

“The Goat Parade and Goat Fest is about as down-home Door County fun as you can find,” Nelson said.

Al Johnson’s annual Goat Fest will follow the parade at Stabbur Beer Garden, next door to the restaurant, and feature all-day, family-friendly festivities, including kids’ games, live music, food and beverages available for purchase, a stein-holding contest and a Swedish-pancake-eating contest. Other businesses throughout Sister Bay will also celebrate with store specials.

Also returning this year is the Goat Drop contest, with proceeds supporting the Northern Door Food Pantry. Participants can purchase stickers at the Sister Bay Advancement Association tent and then place those stickers on the road along the parade route. If a goat “drops” on your sticker, you’re then entered to win a prize.

Get additional details by contacting the Sister Bay Advancement Association at [email protected] or 920.854.2812.