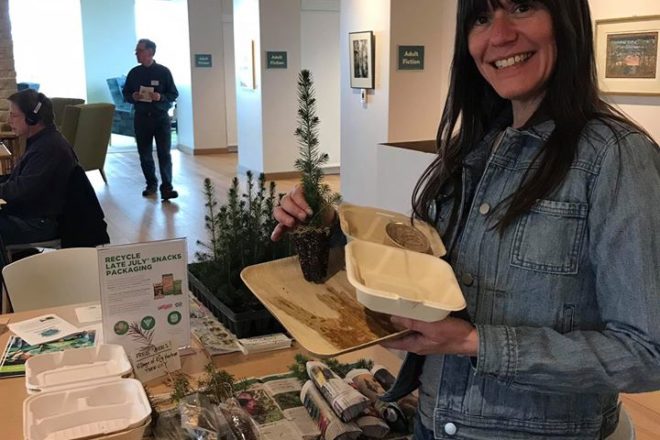 Angela Lensch, a Village of Egg Harbor trustee, shows off biodegradable alternatives for takeout containers at the Every Day Is Earth Day festival in 2019. Photo by Paulina Moncada.

Village pushes sustainable practices for tourism and the future

Kermit the Frog sang, “It’s not easy being green.” Though that may have been the case for him, it’s not the case for Egg Harbor: In August 2017, the village became Door County’s first Green Tier Legacy Community. Ephraim has followed suit.

It started with small steps, such as switching street lights to LEDs, adding recycling cans along main thoroughfares and operating under a framework that targets health, energy, waste, land, water and sewer, and transportation.

The village has also tackled bigger projects such as initiating the Eggy Bike program, establishing a farmers’ market, launching a seed library and implementing electric-car charging stations. And its list of goals is much longer.

The project is modeled after five pilot communities around the state: Appleton, Bayfield, Fitchburg, Middleton and Weston. The Green Tier Legacy Community program is championed by Wisconsin’s Department of Natural Resources with the mission to “promote environmental stewardship, economic growth, public health and social equity in communities throughout the state.”

Why Does It Matter?

According to Lydia Semo, the village’s environmental and sustainability coordinator, Green Tier helps the village encourage greener practices among its businesses by providing information such as which biodegradable products should be used, for example.

“We’ve set the standard for Egg Harbor as a community,” Semo said. “It reminds us why we’re here, why it’s important. It’s bettering ourselves for the future in a way.”

Part of Egg Harbor’s sustainability mission statement is to deliver sustainability to the community in ways that benefit it socially and economically – the latter facet being one that’s overlooked at times, said Village Administrator Ryan Heise.

“On the business side of this, Green Tier is kind of leveraging the brand that already exists in Door County,” he said. “People want to get away from their big city and enjoy nature.”

Heise said he wants to create a community that encourages people to park their cars and choose to walk and bike to enjoy nature.

Promoting green business is likely to attract visitors, but it’s also a chance to get people from outside the county to consider their own communities.

“It gets people thinking outside the box,” Semo said. “They can take what they learned here and [take] it home.”

“It’s not just about Egg Harbor,” Heise said. “I think it’s great that we’re the first in the county, but we’re trying to encourage other municipalities to join the program, including the county government itself.”

Kathy Navis of Greens N Grains, the only natural-foods store in northern Door County, has been a leader in the sustainability movement since she opened the store in 2006. She reduced plastic use in her store and instead uses straws, cups and lids made from other materials such as vegetable-based PLA (polylactic acid), most commonly made from cornstarch.

Navis never considered the elevated cost of these items, she said, though it can be a deterrent for other business owners who are considering making the switch from Styrofoam to more biodegradable items.

She said that the added few cents of cost for greener items can be built into pricing. Plus, customers are unlikely to have objections.

“We have a very educated tourist,” Navis said. “They want to do their part to help, and if they can support a business that does that, that’s what they’ll do.”

Artist Angela Lensch – who has also been a leader in the movement as a village trustee, a Green Tier point person and the creator of the community outline that reviews its accomplishments, plans and goals – is pursuing the idea of creating a cooperative for bulk buying and composting.

A Green Tier Task Force is also coming together to keep information flowing to other community groups. The task force hopes to implement a composting program along with the yard-waste composting that’s already been established.

The Other Green: Money

Heise said there are a lot of grant opportunities for the Green Tier pursuit. The village switched to LED lighting with a grant from Focus on Energy, for example.

The village is now exploring more costly endeavors, including upgrades to its wastewater treatment plant, which is responsible for 70 percent of the village’s energy use. It’s also working on a solar project: a projected $450,000 investment, assisted by more loans and grants to cover costs.

“Even though there’s an upfront investment, you can cover your costs with renewable energy,” Heise said. “Even if you don’t support the environment or if you don’t care about renewable energy or a carbon footprint, even from just a basic economic viewpoint, it makes sense to do this. You can’t get that type of money out of an investment in the bank.”

Jess Reinke, event director and property manager at the Kress Pavilion, said, “The saying is, ‘You need to think of the environment seven generations from yourself.’ As a tourist community, we need to be sustainable because the natural beauty is our greatest resource. If we don’t have that, then we don’t have a tourist destination, which is our economy. We’re next to one of the largest fresh bodies of water in the world. We’re super lucky to have that, and we need to conserve it.”