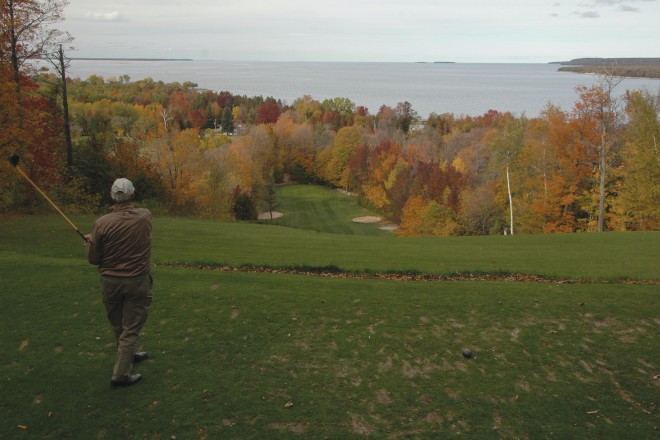 Oh, to be the ball. Soaring higher in an arc above the “Blue” ninth hole of Alpine Golf Course in Egg Harbor, I’d revel in my purpose and take in the view:  a 15-story bluff below, the panorama of the Strawberry and Chambers Islands in the distance, and just beyond the flag, a wide stripe of hardwoods bringing a shock of crimson and gold against the blue of Green Bay.

To be human and stand on the tee, this may be the closest one could come to the feeling of flight with both feet on the ground.

The Blue ninth hole is a 270-yard par four. It offers the greatest change in elevation of the Alpine’s regulation 36-hole public golf course, dropping 120 feet from tee to green. In the 1980s the Milwaukee Journal had named it “the most scenic hole in the State of Wisconsin.” Obviously, today it’s still a sight to experience.

The Alpine Golf Course lies on 200 of the 300 acres that is the Alpine Resort complex. The resort offers a quartet of nine-hole courses, designated by the colors white, blue, black and red, each measuring a mile in any direction from the clubhouse. All of the Alpine’s links feature a number of natural hazards incorporating woods, water and bluff.

Yet, Bill Bertschinger, chairman of the board of the family-run Alpine Resort and Golf Course, will tell you that his course isn’t meant to be an Augusta National or a Whistling Straits. “There are challenges, but this is a resort course – you’re meant to have fun and get a good score,” he says.

The Alpine is the only course in Door County with holes right on the water. There’s a water view from every hole on the Black Nine. And, it’s the only 36-hole course on the peninsula which, Bertschinger points out, “gives a player plenty of variety.”

The Black’s par-3 ninth hole utilizes the bluff in an equally dramatic way as the ninth on Blue. On this hole, either you land on the green off the tee, or you count a hazard stroke and try again. There is no fairway in the 90-foot drop.

Bertschinger, who heads the resort’s physical plant and golf course maintenance, designed this hole by some rather unorthodox means. “I tied a flashlight to a tree below the bluff where I’d envisioned the tee would be,” he says. “I knew if I could see the flashlight from the bluff in the dark, then in the daytime I could see the green.” It’s not surprising that some years ago when more players preferred walking to motorized carts, there was a tram that carried them from tee to fairway on this hole.

When asked what is the toughest hole on the course, Bertschinger says, “If you ask 10 different people, you’ll get 10 different answers.” An informal pole in the clubhouse reveals he’s right. Some say the entire Black Nine is unforgiving because although the fairways are regulation in width, the rough is thick with woods. Others believe the length of the par fives make them the greatest challenge. And then there’s the test of the sharp doglegs on both Blue hole one and Black hole one.

Bertschinger’s father, Paul, and his uncle, John, built the Swiss-style resort in 1921. In 1926 they added the Red Nine designed by Arn Glidden. The Red has since been updated.

During World War Two, the brothers purchased 40 acres above the bluff that had originally been intended for a commuter landing strip. It was there that they built the White Nine in 1948. The design of the White Nine can’t be attributed to an architect, as the name on the plan isn’t legible.

The Blue Nine was built in 1976 and was designed by Fritz Schaller, a golf course architect and the former superintendent of the Shorewood links in Green Bay.

The final nine holes, the Black Nine, were added in 2001. This course is partially bordered by home sites. Although Bertschinger admits to only playing “about six holes a year,” he feels his decades of managing the course qualified him to design the Black Nine.

This year marks Bertschinger’s 67th year at the Alpine, working for his father and uncle since his boyhood and then taking over the reigns of the business when the senior Bertschinger died in the late 1950s.

Running  the resort, which is open from the end of May through mid-October, is still a family affair.

For a man who says he “breathes and sleeps the Alpine,” Bertschinger recalls an incident from the

distant past that appears to be as memorable as the Blue Nine.

“When Bob Hope played here, my sister Gladys got all excited and said, ‘Mr. Hope, you look just like you do in the movies.’ Then Hope said, ‘Sweetie, I can’t help that.’”

In comedy as in golf, timing is everything and Bertschinger doesn’t miss a beat. “Hope enjoyed the course so much, he played a second nine,” he says. “He never paid me for it.”