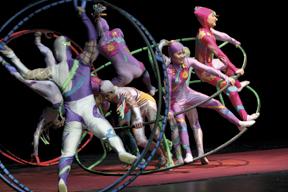 The Golden Dragon Acrobats, the world’s leading Chinese acrobatic troupe, will take the stage at the Southern Door Auditorium on Wednesday, August 19 for two shows at 2 pm and 7:30 pm.

Acrobatic training has been part of Chinese culture for two thousand years, and the Golden Dragon Acrobats epitomize this tradition. The show is an exploration of the physical world at every level. People, as well as objects, are pushed to their limits:  ladders, balls, cloth, hats, plates, umbrellas, fabric, and chairs are all skillfully exploited.

There is no limit to the dexterousness of the acrobat’s bodies. They are as deft with their feet as most jugglers are with their hands, using them to toss umbrellas, juggle balls, and balance full trays of glasses.

Examples of the acrobat’s skills are many. Qui Yu Chen’s shimmering contortion while balancing a tray of glasses on her foot is sheer beauty. A group of women perform a full acrobatic routine while spinning plates so delicately they look like gently waving flowers. One man literally carries the show on his shoulders as he stands on a straight ladder, balancing it, while two men do a headstand routine on top of him.

The show’s climax act is amazing, with one acrobat steadily stacking chairs one on top of the other until they almost reach the ceiling. The powerful music, beautiful costumes, simple themes, and explosive choreography are about something that transcends culture – absolute joy in exploring the full potential of the human body.