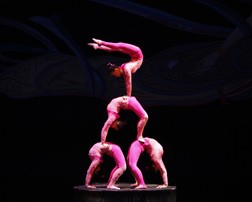 The world’s leading Chinese acrobatic troupe will take the stage at the Southern Door Community Auditorium on Nov. 13 at 7 pm.

The Golden Dragon Acrobats represent the best of a time-honored tradition that began more than 25 centuries ago. The company’s reputation is solidly rooted in a commitment to the highest of production values and an attention to artistic details that is unparalleled in the art form. World-renowned impresario Danny Chang and choreographer Angela Chang combine award-winning acrobatics, traditional dance, spectacular costumes, ancient and contemporary music and theatrical techniques to present a show of breathtaking skill and beauty.

The ancient art of acrobatics has developed into one of China’s most popular art forms. As well as evolving into many forms of performance — dance, opera, martial arts and sports — acrobatics has served an important role in the cultural exchange between China and Western nations.

The troupe has traveled to all 50 states and to more than 65 countries on five continents. The Golden Dragon Acrobats have been presented with the National Association of Campus Activities Entertainer of the Year Award and Campus Activities Today’s Performer of the Year Award, and the company received two prestigious New York Drama Desk Award nominations for its Broadway performances.

This show is free to the community and sponsored by Ministry Door County Medical Center.