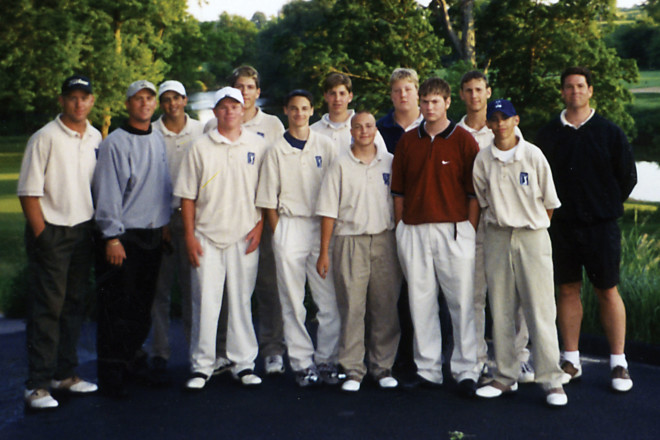 While high school athletic programs are rightly judged by the amount of hardware they’re able to put in the school’s trophy case, the legacy of Gibraltar’s high school golf program cannot be measured by plywood plaques with mahogany veneers and gaudy gold golf figurines standing atop cheap plastic trophies. Instead, it’s the tradition of supplying the golf industry with its best and brightest that truly sets The Vikings apart from other golf programs.

At Gibraltar, the golf culture has been cultivated by many, including coaches, teachers, parents, and the players themselves. So why do so many Gibraltar golfers choose to pursue a career in golf? To answer this question let’s look through the lens of an employer.

Employers love team players, and Gibraltar Golf has always been a team game despite the solitary nature of golf. For me, the team-first concept was ingrained early on in my freshman year, when upper classmen Jon Conlon, Nate Sunstrom, Kevin Klatt and then Coach Bob Spielman organized daily runs every morning at 6:00 am before classes started. Sure, golf is a game that requires a degree of athleticism, but Big John Daly and Craig “The Walrus” Stadler are testaments that cardiovascular fitness is not a prerequisite for golfing success. We weren’t running to get in shape; although it certainly helped…we were running to bond! And bond we did. By the last of those mornings, we were running thick as thieves. At our first few matches that year, Spielman trained us to concern ourselves not with our own score, but the team score. Months later, at the State Tournament, our shaved heads were emblematic of the success brought by that “team first” attitude. 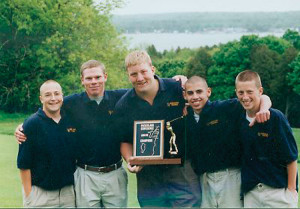 In addition to team players, employers look for honesty and integrity. After all, if they’re going to give us the keys to the cookie jar, they want to make sure there won’t be crumbs on our cheeks and melted chocolate chips on our fingers at the end of a shift. One Gibraltar golfer, the late Chris Simon, instilled honesty among Gibraltar golfers that has been passed down from player to player year after year. Simon was playing a heated match at Door County’s beautiful Peninsula State Park Golf Course. The atmosphere was tense on the 17th hole (“Hill 17” to you wintertime sledders):  Simon blasted his tee shot into the woods behind the green, while his competitor hit a nice easy shot into the heart of the putting surface. Miraculously, Simon escaped the woods with a pitch that landed near the hole for a tap in par. His competitor missed his birdie putt and settled for par. When Simon converted his short putt, he was congratulated on his par and amazing recovery. Simon said, “Thanks but, I made Bogey.” His ball had moved while he wrestled with fallen limbs, leaves, and other debris while trying to cement a stance in the woods. He called the penalty on himself. Many golfers would have stood in the woods asking themselves, “If a golf ball moves in the woods, and no one is around to see it, did it really move?” In Simon’s case, his integrity was more important than the final score.

A small act like Simon’s can cause a chain reaction, the impact of which is hard to measure. Former Gibraltar golfer Nick Kwaterski probably summed it up best when asked which Gibraltar golfer inspired him the most. “In all seriousness, it was Simon that got me into it, I thought he was a God back then,” Kwaterski says. Golf is a game that doesn’t need referees, but you can be certain that when Nick traipses the fairways of the Dakotas Tour – a feeder series of tournaments for the Nationwide & PGA Tours where he will played professionally this summer – he won’t hesitate to call a penalty on himself…Simon told him to.

Once an employer knows she’s dealing with an honest team player, she’s going to want to know if a job candidate can lead by example. One natural born leader is former Gibraltar golfer Jason Daubner. I remember clearly the first time that Jason Daubner (then a high school senior, now Director of Golf at Maxwelton Braes) came to talk to my middle school class about the game of golf and going out for the golf team. Now, to be fair, I grew up playing golf and by the time I was in middle school, golf was, without question, my drug of choice. Nonetheless, Jason’s presentation made me realize that golf could be cool! Further, Jason said that he and Jim Schultz (Director of Golf at Green Bay’s prestigious Oneida Golf and Country Club) were heading off to college to study Professional Golf Management and pursue a career in golf. Study golf? I was all ears! Golf as a career? Count me in!

Employers also gravitate toward those individuals that set goals and tackle them one by one. Aaron Slaby, who is currently studying Golf Enterprise Management at the University of Wisconsin-Stout mentioned that while his team’s ultimate goal was always the season ending state tournament, Coach Fred Anderson and Assistant Matt Meacham taught the team that by achieving short term goals, the ultimate goal would take care of itself. Slaby stated that “being a part of a successful team at Gibraltar helped guide me into the field of golf because it was something that I came to enjoy very much during my time at Gibraltar.” He further mentioned that he is looking forward to a career in golf after college, saying, “After Stout I plan on continuing my education to become either a golf professional or golf course superintendent.” Setting attainable goals has also helped Gibraltar golfer Taylor Mueller who now plays collegiately. Mueller’s Knox College Prairie Fire golf team in Galesburg, Illinois made it all the way to the NCAA Division III National Championships in Atlanta last year. 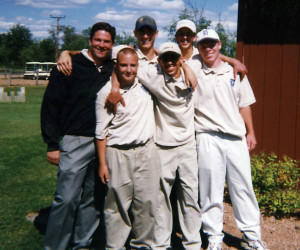 Employers always want to know if their interviewees can multitask. At many schools, the term “student athlete” is more of a paradox than a proverb, but Gibraltar golfers were taught early on by faculty and staff that frequent travel and missed classes did not equal an exemption from studying and hard work. Perhaps no one has embodied the “student athlete” nametag better than Shane Kwaterski. Kwaterski is a stand out member of the Western Illinois Leatherneck golf team and was recently named to the Summit League All-Academic Team, making him eligible for Academic All American Status. Kwaterski is a marketing major at WIU, and maintained a 4.0 GPA this past year.

So next time the crack staff at www.mygolfspy.com blogs about one of the golf industry’s up and comers being a Gibraltar Golf Alumnus, don’t be surprised. After all, when an honest, goal-oriented, team playing, leader by example who can multitask shows up for an interview, you’d be hiring too.